In New York, voters’ despair over Albany’s twisted politics was met with a movement of reasoned hope.

our socialist legislators will join New York State senator Julia Salazar in Albany next year. In June, candidates backed by New York City’s Democratic Socialists of America (NYC-DSA), the nation’s largest chapter with over 5,800 dues-paying members, swept races in Brooklyn and Queens, solidifying the organization’s role as one of the most powerful forces in electoral politics in the state. In the midst of a devastating pandemic, a national uprising, and economic recession, 100,000 New York voters cast their ballots for socialist candidates, promising sweeping change.

In this historic moment, socialists have the opportunity — and the imperative — to grow and build the mass movement we need to win the working class’s demands for workers’ rights, universal health care, and a homes guarantee. NYC-DSA illustrates that one way to build such power is by running a socialist slate.

With its strength in numbers, a slate has many advantages. It is a highly visible formation, capable of amplifying its message across several candidates and neighborhoods, and transforming an individual campaign into movement organizing — a particular weakness for establishment Democrats, who struggle to build a volunteer base and connect with everyday people. 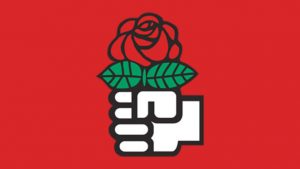 Throughout the election cycle, the “DSA for the Many” slate made it clear that volunteers and supporters were growing a movement, not just supporting a few candidates.

This is the story of NYC-DSA, which, fueled by rent law wins in Albany, ran a slate of five state candidates: Jabari Brisport for Senate; Phara Souffrant Forrest, Marcela Mitaynes, and Zohran Mamdani for Assembly, and once again, Julia Salazar for State Senate.

The slate stood for a clear socialist political program: universal health care, a homes guarantee, a Green New Deal for New York, and the decarceration and decriminalization of working people, particularly people of color. This massive redistributive program is now made viable thanks to the success of the slate — powered by the movements — soon to be in the legislature. Going by the name “DSA for the Many,” the slate’s program reflected the politics and priorities of NYC-DSA more broadly, which promotes a shared platform focused on justice for working people.

Running a slate within a mass organization ensured that our goals and demands both predated and outlived the election cycle. It also meant that NYC-DSA could build a caucus before even getting to Albany. A slate lends credibility, flexibility, and durability to socialists’ individual campaigns. The socialist slate became shorthand for both the organization and socialism itself.

Even before making the decision to run, the slate’s candidates were deeply embedded in working-class organizing, both within and outside of DSA. Phara Souffrant Forrest, for example, is a union nurse whose entry to socialism was through her work as a tenant organizer. Jabari Brisport is a union public school teacher who came to DSA as an activist in the gay rights and Black Lives Matter movements.

Alone, these candidates are impressive. But with the support of a slate, NYC-DSA, and a coalition of progressive organizations, they stood for a movement — the kind of movement necessary to stand up to New York City’s establishment politicians. Their candidacy, and come January, their office, expands the arena for working-class struggle and grows the socialist movement’s credibility with voters and community members.

Unlike Democratic political clubs or nonprofit organizations, NYC-DSA endorsed in races early, kicking off field operations — the arm of organizing that includes having conversations with people and persuading them to vote — in November for the late-June primary. This gave organizers the time to build a base of support within the districts, and to connect the state races to a national platform: Bernie Sanders was still in the race for president, advocating for the same issues the DSA for the Many slate was fighting for.

As DSA members campaigned nationally for Bernie through an independent expenditure, NYC-DSA connected local issues to the Sanders platform. …