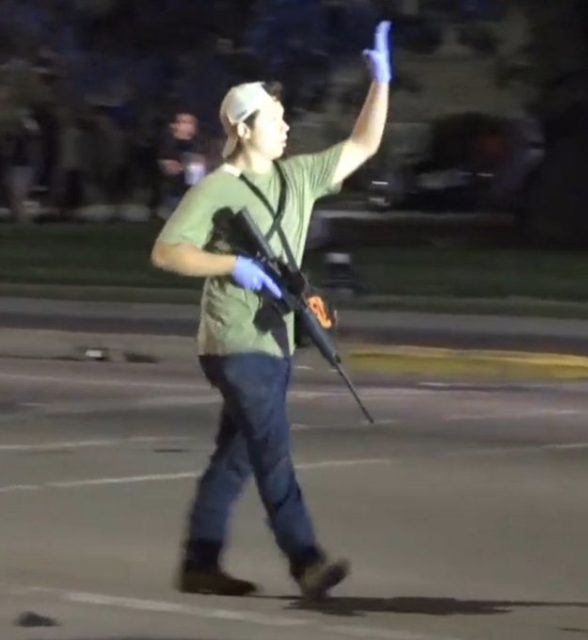 Kyle Rittenhouse, 17, of Antioch, Illinois on the streets of Kenosha (Twitter).

The trend of police and right wing fascist cooperation is as troubling as it is obvious and does nothing — absolutely nothing — to enhance the limping legitimacy of law enforcement.

Memorial Day saw the video documented murder of Black citizen George Floyd in Minneapolis by white police officer Derek Chauvin, which initiated protests against police brutality and in support of the Black Lives Matter movement around the globe. Just shy of three months later Kenosha, Wisconsin witnessed a similar incident with the Sunday point blank shooting in the back with 7 rounds of ammunition of 29 year-old Black man Jacob Blake by a white police officer. As in Minneapolis, the shooting was documented on video by a nearby witness.

Blake appeared to have been shot in the back by one of two officers following him as he was getting into his car. Three of his children were in the car, one of whom was celebrating his birthday. The officer was identified as Rusten Shesky, a 7-year member of the Kenosha police department.

As reported in the Huffington Post early Thursday morning:

“Sheskey, who appears to be white, shot Blake, who is Black, in the back seven times on Sunday as he opened the door of his car. The officers present were responding to a call from a woman about a domestic issue and attempted to arrest Blake. They were “unsuccessful” in using a Taser on him, Kaul said.

“As Blake returned to his car, Sheskey was the only officer to fire his weapon, according to Kaul, who said all of the officers involved are on administrative leave. Sheskey has been a police officer in Kenosha for seven years.

The Department of Justice is leading the ongoing investigation into the shooting, assisted by the Federal Bureau of Investigation and Kenosha County Sheriff’s Department.

Unlike Minneapolis, Blake survived the shooting, though his family reports he is paralyzed from the waist down and suffered numerous, severe internal injuries, including loss of most of his colon. He is currently in intensive hospital care.

And as in Minneapolis, right wing militia members spread violence and destruction.

And again as in Minneapolis, and reported in the Wisconsin Examiner, police pretty much let the rightwing militia operate at will.

Late Tuesday evening a young white man with an assault rifle, who was with a group of other armed white men, allegedly shot a protester in the head [Note: The person responsible for this initial shooting may have been someone else. See interview with reporter who was on the scene in the link below. — Ed.]  was chased and tackled by witnesses but allegedly managed to shoot another man in the arm and a third man fatally in the chest. Despite the calls of witnesses that he had just shot people, the police let him flee.

Wednesday the police named a suspect, 17 year-old Kyle Rittenhouse, of Antioch, Illinois, which is about 12 miles south of the state line. By early Thursday afternoon police reported Rittenhouse was in custody on charges of first degree intentional homicide and in the process of being extradited to Wisconsin. Again, Rittenhouse’s role in the initial shooting is unclear — he may well have not been involved and it is not clear if he has been charged in that incident — based upon the reporter’s interview below.

But there is another larger aspect to this story that needs attention and that is the apparent tolerance — even embrace — of right wing paramilitary militia groups by American law enforcement. Just last week, police in Portland, Oregon stepped aside as groups of armed right wing fascist Proud Boys attacked Black Lives Matter demonstrators and supporters. There have been increasing reports of local police tolerance of armed right wing militia groups harassing, and in some cases roughing up Black Lives Matter demonstrators. In fact, in several cases, the victims of the fascist attacks were arrested by the police instead of the criminals.

According to reports Wednesday in the Milwaukee Journal-Sentinel, Rittenhouse — again, 17 years old — considered himself part of a militia and may have been part of a group that sought to be deputized by Kenosha County Sheriff David Beth, who wisely refused the offer, saying “Oh, hell no.”

Rittenhouse was interviewed in a video clip by the Daily Caller in which he said:

“People are getting injured and our job is to protect this business. And my job also is to protect people. If someone is hurt, I’m running into harm’s way. That’s why I have my rifle; I’ve gotta protect myself obviously. But I also have my med kit.”

The Raw Story reported that prior to the triple shooting:

“The armed civilians had gathered to protect a gas station from looters and vandals, and video shows police offer Rittenhouse water shortly before the shooting and thank him for being there.”

Obviously, there is more to be learned about this particular story, but the trend of police and right wing fascist cooperation is as troubling as it is obvious and does nothing — absolutely nothing — to enhance the limping legitimacy of American law enforcement. Citizens on both the right and left pay taxes and they both have a right to expect professional neutrality by law enforcement. That is what professionalism in law enforcement calls for. Anything less is unprofessional conduct and not deserving of respect.

On Wednesday, as reported by Raw Story, the Kenosha  PD double downed on unprofessionalism in a press conference about the shooting by “an apparent militiaman that left two protesters dead, saying that “everyone involved was out after curfew” and confirming that “a 17-year-old individual” was “involved” in “the use of firearms.”

“Involved [in] the use of firearms” …. yes … that resulted in the death of two and serious wounding of another by a minor illegally carrying a military grade weapon on city streets elbow-to-elbow with Kenosha police.

Many local law enforcement agencies — including Kenosha’s — across the nation are actively torching their own legitimacy by such seedy, obtuse and unethical alignments.

According to The Daily Beast, Rittenhouse’s Facebook page included strong support for President Trump — including photos he posted from a Trump rally — and “numerous photos with Blue Lives Matter-style pro-police slogans and imagery, as well as of an Armalite [assault] rifle similar to the one he appears to have been photographed carrying in Kenosha.” The Trump administration has disavowed any connection to or support of Rittenhouse. It is also unclear whether he was involved in the initial shooting that sparked the subsequent violence and shootings of three.

Rittenhouse was also  a member of a local community “public safety cadet program” for young people from 14-21, which has since been disbanded. He was also involved in a similar group with his local fire department. That progrm had been suspended because of the pandemic.

The historical tie between street thugs and fascists

In Nazi Germany there were the Brown Shirts, bands of armed right wing paramilitary thugs and misfits who terrorized Nazi critics and organized many of the attacks on Jewish-owned businesses, neighborhoods and synagogues. They had a cozy ‘wink-and-a-nod’ relationship with the police, who oftentimes let the Brown Shirts know they wouldn’t arrive until 15 minutes after an attack began. They, too — as we have seen here — would frequently arrest the victims of the radical right street thugs. The militias were there to do what the police couldn’t get away with legally. This is true of all fascist governments.

This emerging alignment of the right wing militia types with too many local law enforcement agencies will only serve to debase the reputation and degrade public trust and respect for police agencies, while bringing us several big goose steps closer to the fascism this nation fought against in World War II. While rubber bullets and bullying may instill fear and compliance they will never foster respect for police.

The Kenosha tragedy will have huge national implications that will play out for some time to come.

(This commentary will air on WDRT 91.9 FM, Viroqua’s community radio station at 5 pm Friday, and be archived as the ‘Monthly Review, August 2020’ at wdrt.org )

(Commoner Call column by Mark L. Taylor, 2020. Open source and free to use with link to www.thecommonercall.org )