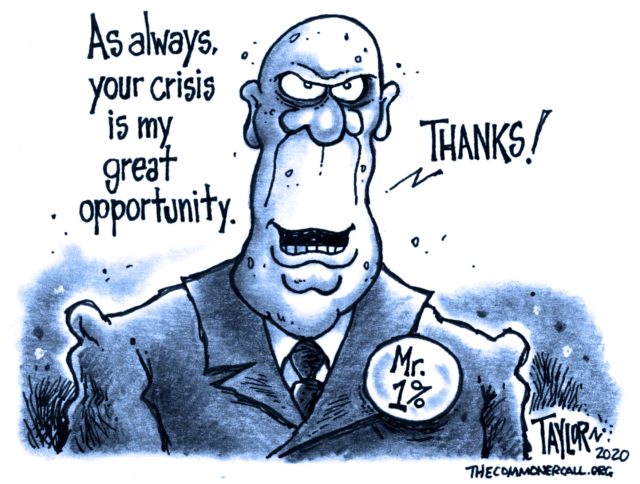 It is time to levy an emergency wealth tax on billionaire profiteers and direct the funds to offset the cost of the nation’s health-care costs.

Nothing symbolizes the inequality of sacrifice during the Covid-19 pandemic more than watching a few hundred billionaires gain while everyone else struggles through job losses, debilitating illness, or death.

Hundreds of thousands of Americans have died from Covid-19 and over 32 million have lost their jobs. U.S. households lost an estimated $6.5 trillion in wealth during the first quarter of 2020 alone.

But billionaire wealth is surging. Since March 18, the beginning of the pandemic lockdown, the 467 U.S. billionaires have seen their wealth increase by over $730 billion, or 30%, according to an analysis of Forbes data by Americans for Tax Fairness and the Institute for Policy Studies.

The Fed has used emergency measures to prop up the economy that reversed the stock-market crash caused by the pandemic, even as the rest of the economy falters. The biggest beneficiaries have been the billionaire class, which keeps on growing wealthier.

It is time to levy an emergency wealth tax on billionaire profiteers and direct the funds to offset the cost of the nation’s health-care costs.

Independent Vermont Sen. Bernie Sanders—backed by Democratic Sens. Kirsten Gillibrand of New York and Ed Markey of Massachusetts—has introduced the Make Billionaires Pay Act to recapture over half the extreme wealth gains made by billionaires during the pandemic. The bill proposes a one-time, 60% tax exclusively on billionaires’ gains between March 18 and the end of this year. It would raise about $420 billion, based on the increased wealth of the country’s billionaires as of Aug. 5.

Sanders proposes directing funds to Medicare to pay all out-of-pocket health-care expenses for uninsured and underinsured households over the next year, including prescription-drug costs. That would “guarantee health care as a right to all for an entire year,” said Sanders in a press statement.

Of course, other members of Congress might have their own ideas for how to spend $420 billion—including putting it toward helping state governments provide public services, maintaining those weekly $600 expanded unemployment payments, or paying out another round of $1,200 stimulus checks, all of which the House-passed Heroes Act would do.

Even with the new tax, billionaires would still have an estimated $310 billion in gains during the worst economic downturn since the Great Depression.

Amazon founder Jeff Bezos, whose wealth has increased a stunning 63% during the pandemic, is now worth an estimated $184 billion. Under the emergency pandemic wealth tax, Bezos would pay an estimated one-time tax of $42.8 billion. After the tax, Bezos would remain the richest person on the planet, with over $140 billion. …