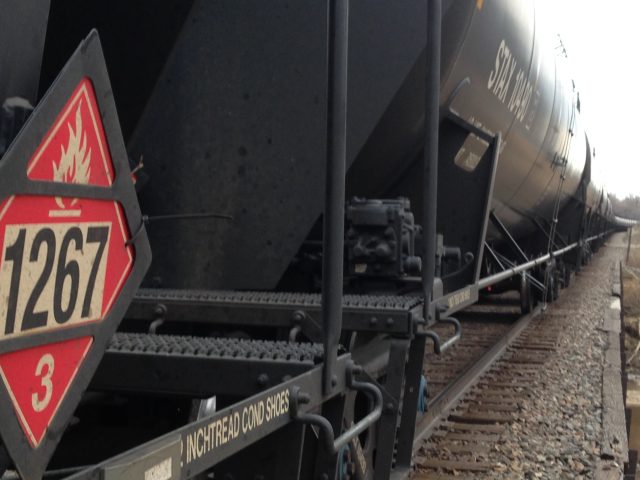 Nonprofit environmental law firm Earthjustice has filed a lawsuit on behalf of a coalition of environmental groups against the U.S. Pipeline and Hazardous Materials Safety Administration (PHMSA), challenging a recently finalized Trump administration rule to allow the transportation of liquefied natural gas (LNG) by rail.

“It would only take 22 tank cars to hold the equivalent energy of the Hiroshima bomb,” Jordan Luebkemann, an Earthjustice attorney, said in a statement. “It’s unbelievably reckless to discard the critical, long-standing safety measures we have in place to protect the public from this dangerous cargo.”

As DeSmog has reported, the Trump administration has fast-tracked rolling out the rule to allow LNG-by-rail without requiring any new safety regulations beyond a slightly thicker tank shell for the rail cars.

The potential consequences of an accident involving a train carrying LNG could be far greater than the already catastrophic and deadly accidents that have resulted from the rail industry moving large amounts of volatile crude oil and ethanol in recent years.

The risks of transporting hazardous materials by rail are well documented, and yet regulators finalized this latest rule  … or requiring basic safety technologies such as modern braking systems that would make these trains safer.

For comparison, estimates place the August 4 exp.losion in Beirut, Lebanon, which killed more than 100 people and injured thousands of others, at 10 percent of the power of the nuclear bomb that devastated Hiroshima, Japan, during World War II.

Regulators have set no limitations on the length of a train carrying tanks of LNG, which means that trains moving 100 or more tank cars of LNG are possible. Longer trains are more profitable for rail companies, and trains stretching 100 cars long already carry crude oil.

No Lessons Learned from Oil Trains

After the 2013 oil train accident in Lac-Mégantic, Quebec, wiped out the scenic downtown and tragically claimed 47 lives, a chorus of questions arose but essentially boiled down to: What happened and how could new safety rules prevent another accident like this? While the incident occurred in Canada, U.S. and Canadian rail networks, and the rules that govern them, are closely tied. At a 2014 forum discussing these issues, Deborah Hersman, the head of the U.S. National Transportation Safety Board (NTSB), addressed a group of regulators and industry representatives, asking a simple question about the risks of moving oil by rail.

“How did this get missed for the last 10 years?” she asked.

Whether it was missed or ignored is up for debate, but in 2020, little is different from 2013 in the way oil trains are regulated. As a result, the trains currently carrying volatile oil from North Dakota’s Bakken Shale and Alberta’s tar sands are just as dangerous as the oil train that derailed and exploded in Lac-Mégantic years earlier.

And now regulators and the fossil fuel and rail industries are repeating the same pattern with LNG-by-rail. The risks of transporting hazardous materials by rail are well documented, and yet regulators finalized this latest rule in July, without studying those safety risks for LNG specifically, or requiring basic safety technologies such as modern braking systems that would make these trains safer.

After the fact, however, a congressionally funded study will research over the next two years the risks of moving LNG-by-rail.

This year, Congress approved $1 million in funding for the National Academies of Sciences, Engineering, and Medicine (NAS) to work with PHMSA to examine the risks of LNG transportation in rail tank cars, stipulating that the “study should inform rulemaking.”

Because PHMSA has already issued a rule allowing LNG-by-rail, this study can’t inform that rulemaking. The next meeting of the NAS committee studying this issue will be held on August 31.

In July, the Federal Railroad Administration (FRA) released the results of its tests of the rail tank cars that are approved to carry LNG, tank cars known as “DOT-113.” The test simulated the potential impact to a DOT-113 tank car for a train traveling at 17 miles per hour (mph). The tank car survived this test and was not punctured. That is good news. However, federal regulations recommend — not require — a speed limit for LNG trains of up to 50 mph.

Why didn’t the FRA test what happens to this tank car when it’s traveling at 50 mph? Does the agency think any tank car can withstand that impact, much less one carrying hazardous materials? Federal regulators for years have conducted these sorts of tests that ignore real-world conditions, resulting in an appearance of providing industry oversight. Meanwhile the rail industry continues packing hazardous materials into questionable tank cars on extremely long, overly heavy trains with outdated braking systems. …