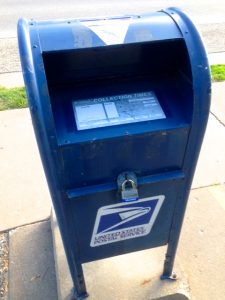 As her Beloit restaurant all but shut down during the pandemic, her specialty food mail-order business ramped up and she began shipping chive vinegar and dilly beans all over the country. She bought special boxes to be compliant with the USPS, her most affordable option for shipping.

“Our online sales grew by 250 percent, a massive number in such a short time,’’ she said.

But about three weeks ago, her customers began inquiring about delayed orders. She checked tracking information and noticed “that is it has been just sitting at the post office for five days.”

The delays are results of President Donald Trump and his administration’s attacks on the Postal Service. Trump openly admitted last week to denying needed funds to the USPS to cripple its ability to handle an expected surge in mail-in ballots in November as Americans choose to vote absentee at record rates due to the pandemic. …

What The Post Office Needs To Survive A Pandemic Election

This fall’s elections are the latest chapter in the slow-motion collapse of the U.S. Postal Service, one of America’s most venerated institutions. As November approaches, members of Congress and state election officials have grown increasingly concerned that the USPS will fail at a critical moment: a closely contested vote that will involve a record number of people casting a ballot by mail.

That worry was fueled by President Donald Trump’s unfounded allegation that voting by mail leads to massive fraud and by reports from Postal Service employees that key equipment was being removed and overtime was being slashed. The newly appointed postmaster general, Louis DeJoy, responded to what he termed “areas of concern” by announcing that he would approve overtime “as needed” and delay the removal of mail sorting machines until after the election. But the problems at the Postal Service go well beyond those issues and predate DeJoy. Earlier this month, the USPS warned state election officials that it might not be able to meet deadlines for delivering ballots for the November elections.

With DeJoy scheduled to testify before an emergency session of Congress on Friday, here’s a guide to help you understand the issues and what remedies lawmakers could provide. …