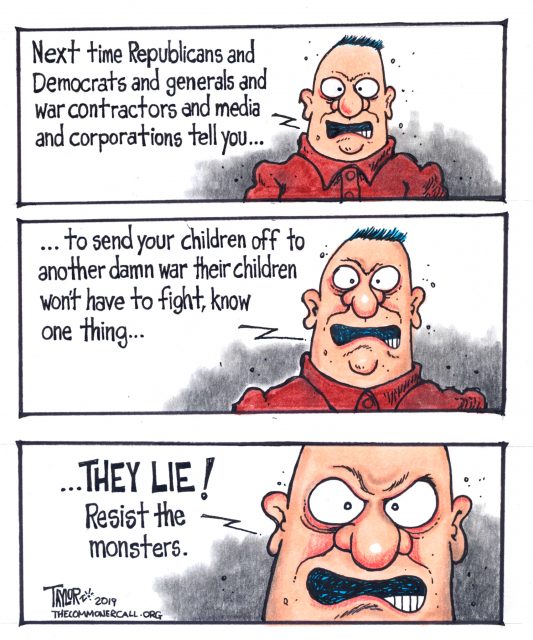 [Editor’s Note: But not to fear, the war contractors are doing just fine. Congress recently approved 12 additional scandal- and defect-plagued F35’s, which range from $95-$129 million apiece. But the soldiers? Let ’em hitch in their belts.– Mark L. Taylor]

Nearly a fifth of active military families in Virginia say they can’t reliably afford enough food — and many even experience longer term hunger, according to a survey conducted by the Military Family Advisory Network.

Most of those families are concentrated in the Hampton Roads area, the nonprofit said.

“It’s something that caught us off guard,” said executive director Shannon Razsadin, who’s also a Navy spouse. “No one would think military families are at risk of food insecurity.”

The network conducts an annual nationwide survey that asks military families about a range of issues from mental and physical health to finances and child care. Razsadin said the organization tries to stay ahead of the curve with problems the families are facing.

Surveyors also found a statistically significant correlation between a service member’s military rank and where they fell on the food insecurity scale — the lower the rank, the higher their placement.

A few years ago, a member of the network’s advisory board who lives in Virginia Beach said she was seeing food insecurity among local military families, Razsadin said. That led to the issue being added to the survey.

They use a six-question scale developed by the U.S. Department of Agriculture that asks, for example, if in the past year you have eaten less than you felt you should because there wasn’t enough money for food, whether you’ve skipped meals for the same reason and whether you couldn’t afford to eat balanced meals.

If respondents answer affirmatively to at least two of the items, they’re considered food insecure. At five or more, they’re experiencing hunger.

The advisory network’s most recent survey was conducted in October and November and included 7,785 people. Nationwide, nearly 13% of military family respondents qualified as having food insecurity. Almost 8% of those families were on the highest end of the scale. …

‘What a Disgrace’: War Department Weighing $2.2 Billion In Cuts To Military Healthcare Just After Passage Of Massive $740 Billion Budget

Shortly after both chambers of Congress approved a $740 billion Defense Department budget for fiscal year 2021, Pentagon officials are reportedly pushing for more than $2 billion in cuts to military healthcare over the next five years, potentially threatening the coverage of millions of personnel and their families amid a global pandemic.

Politico reported Sunday that the proposed $2.2 billion cut to the military healthcare system is part of a “sweeping effort” by Defense Secretary Mark Esper to “eliminate inefficiencies within the Pentagon’s coffers.”

“Ever notice that it’s never a cut to things used to send kids to war?” asked Josh Moon of the Alabama Political Reporter. “It’s always—always—a cut to the promises we make to get them to volunteer for us. What a disgrace.”

According to Politico, “Esper and his deputies have argued that America’s private health system can pick up the slack” for any servicemembers who lose coverage.

Rep. Mark Pocan (D-Wis.), co-chair of the Congressional Progressive Caucus, said the push for billions in healthcare cuts shows once again that the Pentagon “puts more effort in protecting defense contractor profits than the lives of our troops.”

Alongside Rep. Barbara Lee (D-Calif.), Pocan co-sponsored an amendment to the National Defense Authorization Act that would have cut the proposed $740 billion budget by 10% without touching the military healthcare program. The amendment failed last month by a vote of 93-324, with 139 Democrats joining 185 Republicans in voting no.

A companion amendment in the Senate led by Sens. Bernie Sanders (I-Vt.) and Ed Markey (D-Mass.) also failed to pass.

Unnamed Defense Department officials told Politico that, if approved, the cuts “could effectively gut the Pentagon’s healthcare system,” adding to the rapidly swelling ranks of the uninsured. A study released last month by advocacy group Families USA found that at least 5.4 million Americans have lost their health insurance during the coronavirus pandemic.

“What’s been proposed would be devastating,” warned one anonymous senior official.