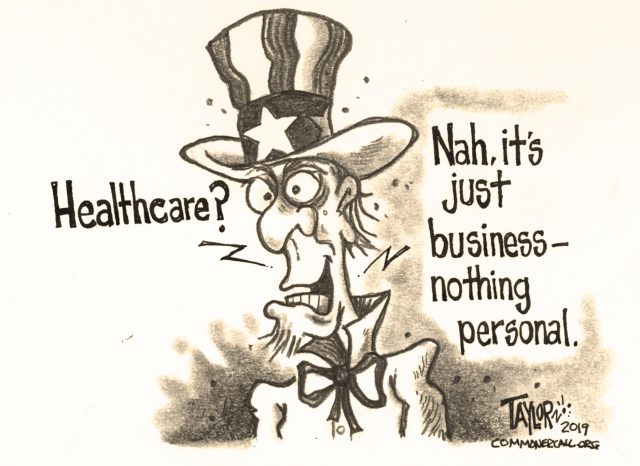 The holy mantra of health professionals was coined about 2,500 years ago by the Greek physician Hippocrates: “Do no harm.”

Of course, that was before corporate healthcare took charge and asserted a new guiding ethic: “Jack up profits.”

Putting this in practice, America’s largest and richest hospital chains rushed to the front of the COVID-19 bailout line this spring to pull $15 billion from the government’s emergency fund. They pocketed the taxpayers’ money despite sitting on tens of billions of dollars of their own cash reserves.

But hold your nose, for it gets much stinkier.

The bailout was intended to keep hospital workers on the job. Yet the wealthiest chains have hit nurses, janitors, and other crucial frontline staffers with layoffs, pay cuts, and deadly shortages of protective gear.

For example, HCA, the $36-billion a-year health care behemoth that’s wallowing in profits, snatched a billion-dollar taxpayer bailout for itself, then demanded hospital staffers accept wage freezes and the elimination of company pension payments… or have thousands of jobs eliminated.

However, in a public show of compassion, HCA’s chief executive Samuel Hazen donated two months of his $1.4 million salary to an employee support fund. Magnanimous? Deceptive is more like it.

The trick is that a CEO’s “salary” is a miniscule part of total pay. Hazen’s annual bonus, stock payouts, and other compensation will raise his actual pay to almost $27 million.

So his donation is less than 1 percent of his pay, and he almost certainly will write that off his income taxes. That means we taxpayers — including the nurses and others he’s knocking down — not only underwrite his fat take-home pay, but we also subsidize his face-saving philanthropic gimmick.

What we have here is a raging virus of executive suite greed doing deeper damage to our society than COVID-19 ever could.

Within Health Care USA, Risk & Reward$ Have Never Been More Out Of Whack

We need, no more than ever, systemic change in health care, starting with Medicare for All.

How’s pandemic life been going for you? If you work in America’s health care industry, that depends. That totally depends.

If you happen to provide health care services to actual Covid-19 patients — as a nurse or a doctor, an orderly or a physician’s assistant — this has been the year from hell. Amid the worst worldwide pandemic in over a century, you’ve been working long, intense, chaotic hours. You’ve watched patients die at rates unimaginable just six months ago. You’ve watched colleagues die. You’ve worried that you may be bringing death home to your families.

If you work in health care but don’t interact with pandemic patients, the months since March haven’t exactly been easy street either. In April alone, 1.4 million health care workers lost their jobs, as virus-free Americans delayed and cancelled appointments and elective procedures.

At CVS Health, the corporation that owns Aetna, CEO Larry Merlo pocketed $36.5 million last year, up from $21.9 million the year before. Merlo took home 790 times the pay of his company’s most typical worker.

The lowest-paid CEO among America’s seven biggest health insurers, Anthem chief Gail Boudreaux, grabbed a healthy $15.5 million in 2019, the equivalent of just under $300,000 a week.

If, on the other hand, you swivel your day away in a corporate health care executive suite, these difficult and horrific months of Covid-19 have been among the most rewarding — financially — you’ve ever seen. The “vast majority” of health care companies, Axios reports, “are reporting profits that many people assumed would not have been possible as the pandemic raged on.”

Health insurers are leading the way, enjoying earnings, as a New York Times analysis puts it, “double what they were a year ago.” UnitedHealth, for instance, registered $6.7 billion in 2020 second-quarter profits, up from $3.4 billion in last year’s second quarter.

What explains this huge insurance industry profit spike? The simple story: Insurers like UnitedHealth, Aetna, and Anthem are continuing to collect their regular premiums from the Americans they insure, but they’re paying out far less — as the pandemic rages on — for claims on normal maladies.

Now the Affordable Care Act — Obamacare — does have a provision that requires insurers to spend at least 80 percent of the premium dollars they collect on providing direct health care services. If they miss that target, they have to rebate dollars to the businesses and individuals they insure. Those rebates, unfortunately, seldom amount to much.

One reason: Many of the giant health insurers don’t just sell insurance. They also control networks of doctors and own health services firms like pharmacy benefit managers. These auxiliary companies charge — and overcharge — their parent health insurer for the health care services they provide. These relationships, in effect, let health insurers launder their profits and sidestep the Obamacare profit limits. …