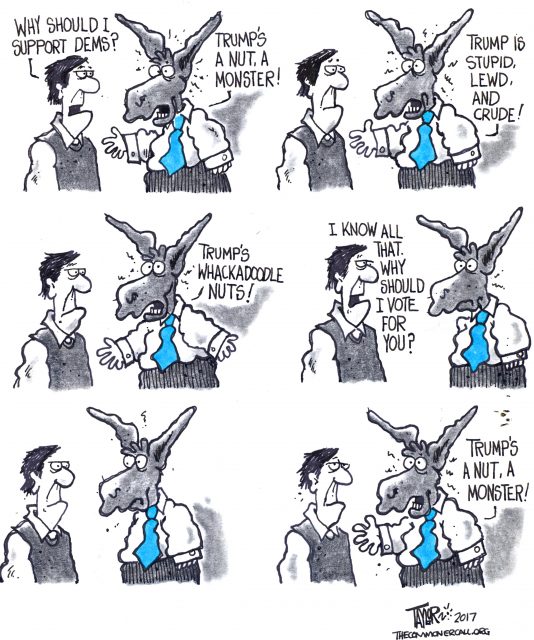 The curtain is coming down on the Trump show. We need to make sure it rises on a better day.

Reality is finally catching up with our reality TV star president. Faced with an unprecedented economic collapse triggered by his own clear failure to contain the COVID-19 pandemic (something other industrialized nations have managed to pull off) the Donald tweeted hopefully last week that the November election might need to be rescheduled.

No one really knows if Trump is hoping to emulate the strongmen he admires and name himself president-for-life, or if he was just trying to create a distraction from the awful jobs numbers that show what a mess he’s made of the U.S. economy.

Either way, it’s clear he sees the writing on the wall. The American people have had enough of malignant narcissism and feckless governing. They are tired of living with the disastrous results of this president’s non-leadership. Joe Biden is ahead of Trump by double digits, and is leading in swing states including Wisconsin. Unless the Republicans up their voter suppression game to previously unimagined heights — or, as Trump suggested, call off the election — Trump is toast.

The presumptive Democratic nominee is not exactly the face of the future. Biden will no doubt run a more competent administration, and will appoint people who actually care about governing. That’s a good start. But going back to the past is not going to solve our worst problems.

As terrible as these times are — and as terrifying as it is to see things devolve so far so fast — there is something hopeful about Trump’s failure.

For one thing, Trump himself is losing the one thing that is most precious to him — our undivided attention. The fact that Trump’s election gambit failed to elicit a big reaction from either side of the aisle in Congress or from the public shows that we’ve entered a new phase of politics. Call it Trump fatigue. Trump has lied so much for so long, people are finally just tuning him out. No amount of posturing, preening and shock-jock showmanship can distract people forever from their own circumstances.

Even better, Trump’s efforts to start a race war are falling flat. Americans have awakened to the struggle against systemic racism and favor the police reform measures Republicans in Congress have resisted. They don’t want federal troops called in to “defend” their cities against Black Lives Matter protesters. Federal troops who were grabbing protesters off the streets in Portland are quietly retreating. And Trump’s fear-mongering campaign doesn’t seem to be working, either. That’s partly because the so-called suburban housewives he is trying to appeal to are not the frightened shut-ins he imagines and partly because things are so damn bad already. It’s hard to win by warning that if you are not re-elected the result will be chaos and collapse while presiding over chaos and collapse.

Trump is so godawful, you would think more Republicans would be jumping ship already. But apart from Mitt Romney, Charlie Sykes, and a handful of other principled conservatives, GOP politicians appear to be willing to go all the way to the bottom with their epic failure of a president. …