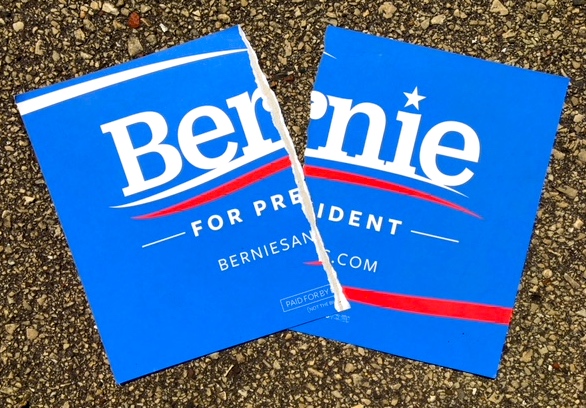 It became clear that management would not consider the input of its workers in the field.

[Editor’s Note: How ironic that an avowed Democratic Socialist had his campaign managed like just any other clueless corporation. As in most corporations, the well-paid campaign executives of the Sanders campaign ran a top-down, clueless show. More sheep dog than revolutionary, it is clear Sanders’ true job was to herd stray progressives back into the DNC corral. — Mark L. Taylor]

here is no doubt that Bernie Sanders’s campaign for president inspired an unprecedented grassroots movement in this country. We built a multiracial, multigenerational campaign of working people united under a common struggle for human dignity. We all witnessed our fellow organizers, volunteers, and ourselves commit everything to further this cause.

If we are going to build a future characterized by economic, racial, and environmental justice, we have to take what we accomplished during this campaign further. We owe a transparent assessment of this campaign’s failures to our supporters, volunteers, and to that future we hope to build.

The decision to downsize staff was never fully explained, and various efforts, including letters and petitions within and outside of the union, left largely unsatisfactory answers.

None of us was under the impression that fundamentally changing the American political system was going to be an easy feat. In light of 2016, many of us expected unprecedented levels of resistance from the Democratic political establishment we were working to unseat. From the mired Iowa caucus results, to the DNC consolidation behind Joe Biden before Super Tuesday, to rampant bad-faith smears from the corporate media, it was clear that we were truly fighting against an entrenched and effective establishment. But these are not the only reasons for our defeat in that fight.

Leading up to our precipitous downfall after Super Tuesday, the campaign’s field team had been expressing concerns over strategy and staffing for months. Beyond what has been publicly litigated by campaign management, media, and our supporters, our defeat can also be attributed to two major internal failures: an overreliance on the distributed model of organizing, and the lack of a system to maintain accountability, transparency, and feedback from staff on the ground to upper management.

We owe a full explanation of these factors to our base to show that it is not our movement that has failed — Bernie’s policies have proven to be incredibly popular — but rather a strategic error of the same campaign structures which hindered us from fully engaging our organizers, volunteers, and ultimately our voters.

The organizing program on the Bernie campaign was fundamentally a battle between two competing organizing philosophies. …