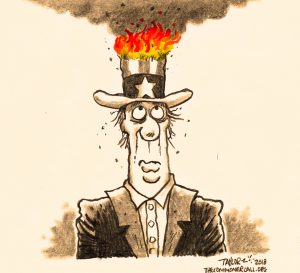 These are “the good times,” says Hedges, compared to what may lie ahead. But there’s real hope in the streets.

[Editors Note: Want to understand the context of what is happening? Journalist Chris Hedges lays it out the bipartisan failure unspooling before us . — Mark L. Taylor]

Time is broken in Donald Trump’s America. Minutes feel like hours, hours feel like days. Weeks are months, and months are years. And there is an overwhelming sense of time warped by dread as the country careens towards a dangerous climax on Election Day — whatever the outcome.

Disorientation is a feature of life in a failing democracy where fascism is ascendant.

In a widely read conversation here at Salon during the first few weeks of the national pandemic lockdown and the implosion of America’s economy, journalist and bestselling author Chris Hedges warned that, compared to what may lie ahead, “these were the good times.”

Mitch McConnell and the other elites really have not figured out what is happening in this moment of great crisis and upheaval. What we are seeing now in America is about so much more than people just being sick of the police murdering innocent people. It is a generational and class revolt.

This was before the coronavirus pandemic continued its deadly march where today more than 136,000 people are dead. Hedges’ warnings were also made before we saw the full horror of Trump’s willful incompetence, cruelty and sabotage, or his willingness to sacrifice millions of Americans — including, potentially, children — for “the economy,” capitalism and, of course, his own re-election. Hedges also issued his warning about “the good times” before Trump’s threats of martial law and using military forces against the George Floyd protests and people’s uprising. It was also before Donald Trump declared war on Independence Day weekend against any and all Americans who dare to oppose him.

I reached out to Hedges again and asked him, “Are these still the good times?”

In our latest conversation, Hedges explains why this perilous moment in America will be looked back upon fondly, compared to what the future holds. He sees little hope in Joe Biden and the Democratic Party, which he believes have no substantive solutions for the social inequality and other institutional problems that spawned Donald Trump and his white neofascist movement. Hedges is also concerned that America is spiraling down into the type of ethno-political violence he personally witnessed in Yugoslavia during that country’s civil war in the 1990s.

But Hedges also sees hope for saving the United States from imminent tyranny. Where? In the George Floyd protests and the possibility of revolutionary change.

You can also listen to my conversation with Chris Hedges on my podcast “The Truth Report” or through the player embedded below. …

Read The Rest And 20-minute Video