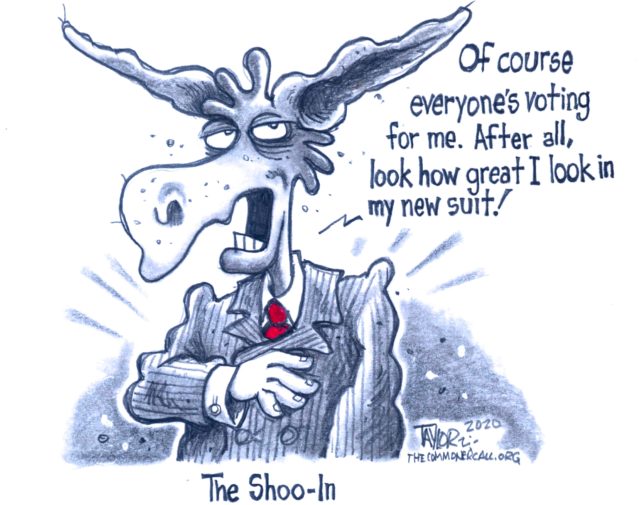 I am not a pessimist by nature. What I am is extremely cautious, and because of the utter disaster that was 2016, I would encourage Democrats to take every possible step to avoid lapsing into complacency.

[Editor’s Note: Voters will never be as strongly motivated to vote against a candidate as they would be voting for a platform of hope and genuine response to their needs and suffering. So far, the dems don’t get that. One can hope someone in the Biden campaign wakes up, soon. — Mark L. Taylor]

In 2016, many Democrats were certain Donald Trump would lose. They pointed to polls showing Hillary Clinton five points ahead even in red states like Arizona. A buffoon, they thought, could not be president. The American people would never put Donald Trump in the White House. Some warned at the time this was wishful thinking, and without an appealing candidate or an ambitious agenda, Democrats would fail to inspire people to come to the polls. But Trump’s victory was simply unthinkable, so Democrats did not think about it.

I would have thought the central lesson from 2016 was: beware complacency. There is a tendency to tell yourself the story you wish were true, to selectively pay attention to the facts that support that story, and to ignore facts that contradict it. One will be biased by how things look from the Bubble: nobody I know supports Trump. It is critical that we guard ourselves against overconfidence, because there is no downside to doing so: in an election, you should assume you’re going to lose until you’re certain that you’ve won, because then you’ll be motivated to do everything you possibly can in order to ensure victory. It does not hurt to win by too much; it only strengthens your “mandate.”

So there’s been little Democratic political leadership at a time when it’s of the utmost urgency, and while I am sure the American people are generally bitter about the situation they face, I am not sure how many people are confident that the Democrats care about solving things.

Yet there are troubling signs that some Democrats have not, in fact, learned the lesson. “Believe the Polls This Time,” wrote Democratic pollster (and architect of BP’s greenwashing rebrand campaign) Stanley Greenberg in the Atlantic. With polls showing Joe Biden five points ahead in Texas, the state was being declared “very winnable” and a “swing state,” the same kind of data that led Hillary Clinton to spend the leadup to Election Day campaigning in Arizona rather than Wisconsin. I am feeling a creeping sense of déjà vu.

Greenberg is a pollster, so his argument is primarily based on analyzing the polls. He admits that in 2016, he completely botched the analysis and succumbed to wishful thinking. But this time, he insists, is different. He has adjusted his polls to include more non-college-educated white people and is not overlooking the same things he overlooked last time. The changing demographics of his samples, he says, are “an elixir against being deceived again.”

Greenberg points to Hillary Clinton’s “worst blunder” in September of 2016, when she called many of Trump’s voters “a basket of deplorables.” “White working-class voters noticed the lack of respect,” Greenberg comments. Trump’s approval rating is only 41%, he adds, and the American people simply do not support Trump’s agenda. The most important factor is:

“… the sustained, unwavering, and extremely well-documented opposition of the American people to every element of Donald Trump’s sexist, nativist, and racist vision… Trump’s raison d’être as a candidate and mission as president is to stop immigration… This president has created a country that is committed to defending its values. Just not his values.”

And while Greenberg acknowledges that “in the next four months, many things could put Biden’s current lead at risk,” he concludes:

“The lingering apprehension among Democrats fails to recognize just how much the political landscape has changed since 2016. We are looking at different polls, a different America, and different campaigns with different leaders.”

Incapable of seizing the moment

Now, I do not doubt that Greenberg is right that Biden’s poll numbers are better than Hillary Clinton’s. Personally I used to think Biden had very little chance of beating Trump, but since then a pandemic has destroyed the American economy and the Trump administration has shown itself totally incapable of managing the crisis. Nearly 90 percent of people are dissatisfied with the direction the country is going. This changes things, and makes Trump far more vulnerable than he would have been in “normal” times. In the middle of such a disastrous failure by the president, you would think the opposition candidate would almost certainly win, unless the opposition party were just staggeringly incompetent and incapable of seizing the moment.

But that’s exactly what the Democrats are. In the American Prospect, David Dayen goes through Nancy Pelosi’s miserable record on coronavirus relief. Andrew Cuomo, the most prominent state-level Democrat during the crisis, has nothing to be proud of (his actions directly killed a man I knew and liked, which makes me personally despise him). Already, Pelosi is preparing people for a “compromise” on additional relief funding, and as Nathan Tankus has described the situation we face…