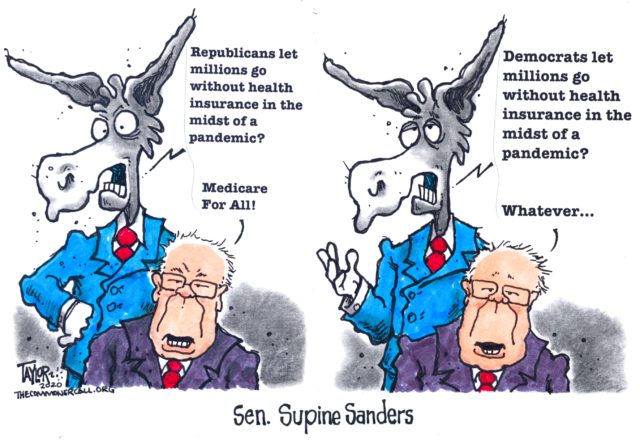 The recommendations are an improvement on Biden’s previous healthcare plans, but a public option won’t cut it. We need free, universal coverage.

On Wednesday, the “unity task forces” set up by presumptive Democratic presidential nominee Joe Biden rolled out a set of policy recommendations for the candidate, and, by extension, for the party writ large. Launched in May, the group behind the proposed platform was comprised of a core of establishment-aligned politicos as well as allies of Bernie Sanders, the primary’s runner-up whose campaign advanced an agenda squarely to the left of Biden.

While the task forces provided recommendations on issues ranging from climate change to criminal justice, the healthcare group attracted much attention as observers wondered how the group would square the wide gap between Sanders’ unwavering calls for a single-payer Medicare for All system, and Biden’s commitment to maintaining the private insurance system enshrined by the Affordable Care Act (ACA).

It still casts us as healthcare consumers, shopping for the best-valued access to a foundational human need that shouldn’t be commodified to begin with.

Unsurprisingly, the task force did not endorse Medicare for All, which would essentially liquidate the existing version of private health insurance and replace it with a single public system that covers everyone and provides all necessary and effective care free from the point of use. But the presence of former Michigan gubernatorial candidate and single-payer advocate Abdul El-Sayed as well as Rep. Pramila Jayapal (D-Wash.)—who each endorsed Sanders, and the latter of whom is the lead sponsor of the Medicare for All bill in the House—was evident in more left-leaning measures than Biden has previously embraced. If the healthcare platform as presented were to be fully implemented under a future President Biden, it would amount to a significant improvement on the status quo—albeit with persistent gaps that can’t be resolved without abolishing private health insurance as it’s currently constituted.

The recommendations front-load a temporary phase of coronavirus-related emergency measures, many of which have emerged as consensus demands from Democrats—including free coronavirus testing irrespective of immigration status, federally-bankrolled expansion of contract tracing, and a period of 100% premium subsidies for those eligible for COBRA coverage throughout the duration of the pandemic. The document also calls for a special enrollment period for ACA marketplaces, which will include a stopgap low-fee platinum option for people who run out of, or don’t qualify for, several months of full COBRA subsidies.

More broadly, the task force seeks to reinvest in critical public health infrastructure at the local and state level, much of which was financially hollowed out during the Great Recession and has been left in disrepair since. It also calls for permitting Medicare to negotiate prescription drug prices, funding for research into racial health inequities, repealing the Hyde amendment and securing protections for LGBTQ people that were rolled back under President Trump.

The task force also advances a blueprint for a public option, which includes critical details that gesture toward left-wing activist pressure, as well as ambiguities that could bolster the sort of profit-seeking gamesmanship that renders the current system so dysfunctional.

For starters, the proposal hints that the public option may actually be a set of options, à la Medicare, which offers “consumer choice” while in practice curbing access to care while lining insurers’ pockets. Still, according to the proposal, at least one public option plan available on the marketplaces must be publicly administered and have zero deductibles, which is far preferable to the kind of privately-administered “public option advantage” plans these recommendations leave the door open to. The public option, as laid out here, would also be extended for zero premiums to individuals who qualify for Medicaid but live in non-expansion states, automatically enroll low-income people who earn too much for Medicaid, and be available as an alternative to employer-based coverage. Meanwhile, the Medicare eligibility age will be lowered from 65 to 60, and barriers will be lowered for states seeking waivers to build state-based single-payer programs.

All of these changes would be an improvement upon the healthcare system as it exists now, an abysmally low bar that Republicans are nonetheless desperate to limbo beneath. In the wake of their unsuccessful attempts to repeal and replace the ACA in 2017, the GOP has consistently chipped away at the law however possible, through pushing Medicaid work requirements, bottoming out budgets for navigators and advertising to help inform and guide patients through enrollment, and loosening restrictions on short-term junk plans. Even more gravely, the Trump administration recently encouraged the Supreme Court to strike down the entire ACA.

But assessing just how much Biden’s task force’s plan would improve the lives of patients depends on details we simply don’t have. The proposal stipulates that premiums will be capped at 8.5% of income (more for a family), which could potentially mean that a slate of relatively robust public option plans would force private plans to improve substantially to compete. Or, more likely, private insurers could take a cue from Medicare Advantage and find ways to cherry-pick healthier patients while off-loading sicker ones onto the public program. …

“I write this to appeal, hell, plead, with my fellow Americans to pay attention to the suffering that exists all around us—to recognize our well, able-bodied privilege, and to come together to tear this cruel system down.”

A recent study by Yale epidemiologists found that Medicare-for-All would prevent 68,000 deaths a year. These 68,000 deaths are not quiet, peaceful deaths. They are gasping-for-air, writhing-in-pain, bleeding out, wasting, violent, gruesome deaths. These deaths often follow extended periods of physical pain, emotional distress, and financial ruin.

The same study found that Medicare-for-All would save the United States 45 billion dollars annually. In the midst of a pandemic-motivated corporate bailout estimated at between $6 and $10 trillion so far, the ‘’but how will we pay for it” argument has largely been abandoned. And yet, the nominee for the Democratic Party has unequivocally stated that he will veto Medicare-for-All, the Democrats in Congress have proposed a bill to bail out insurance companies that subsidizes COBRA payments rather than provides healthcare for their constituents, and 27 million Americans and counting have lost their employer-based coverage as unemployment soars. Three of the four members of Congress with the highest campaign contributions from the pharmaceutical industry are Democrats, and the healthcare lobby accounts for a third of the contributions to the DCCC in the 2019-2020 election cycle. As usual, the Republicans brazenly broadcast their disdain for the poor, sick, and disabled. Put simply, both Democrats and Republicans receive many millions of dollars from the healthcare lobby to ensure that the industry profits at the expense of human life. There is no relief in sight from either establishment party, not even in the shadow of economic collapse.

By settling for anything less than universal healthcare and by voting for someone who does not support Medicare-for-All, we are committing a deliberate and willing act of violence against the poor, sick, and disabled among us.

I write this not to rage against the bipartisan, healthcare and pharma lobby funded machine. Although, the American public should at minimum educate themselves as to why every developed nation on earth has managed to provide healthcare to its citizens as a right, except for the US.

I write this to appeal, hell, plead, with my fellow Americans to pay attention to the suffering that exists all around us- to recognize our well, able-bodied privilege, and to come together to tear this cruel system down.

I have MS. I have a growing Rolodex of injuries, illnesses, and disabilities. I am exhausted. My prospects are limited. I am a victim of the unwinnable battle with our healthcare system. I work full time to keep my increasingly unaffordable health insurance. Ironically, I will lose this insurance when my full time job makes me too sick to continue working full time. I cannot vote for a candidate that doesn’t support Medicare-for-All.

Shut up and sit down

Class does not prevent illness and disability, though their onset tends to push the afflicted into poverty. People with disabilities make up 12% of the US population, yet account for more than half of the population living in long-term poverty. Medical bills are responsible for an astounding 66.5% of bankruptcies. As of January, it was estimated that as many as 25% of Americans delayed getting healthcare because of cost, resulting in great physical pain, mental anguish, and death. These numbers have surely grown exponentially during the pandemic.

And please, allies; recognize that by settling for anything less than universal healthcare and by voting for someone who does not support Medicare-for-All, we are committing a deliberate and willing act of violence against the poor, sick, and disabled among us.