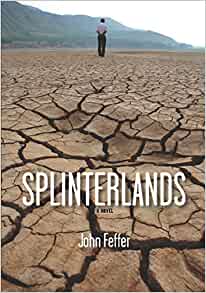 A wild ride through a bleak future.

Julian West, looking backwards from 2050, tries to understand why the world and his family have fallen apart.

Part Field Notes from a Catastrophe, part 1984, part World War Z, John Feffer’s striking new dystopian novel, takes us deep into the battered, shattered world of 2050. The European Union has broken apart. Multiethnic great powers like Russia and China have shriveled. America’s global military footprint has virtually disappeared and the United States remains united in name only. Nationalism has proven the century’s most enduring force as ever-rising global temperatures have supercharged each-against-all competition and conflict among the now 300-plus members of an increasingly feeble United Nations.

As he navigates the world of 2050, Julian West offers a roadmap for the path we’re already on, a chronicle of impending disaster, and a faint light of hope. He may be humanity’s last best chance to explain how the world unraveled—if he can survive the savage beauty of the Splinterlands.

John Feffer is the director of Foreign Policy in Focus at the Institute for Policy Studies. In 2012–2013, he was also an Open Society Fellow looking at the transformations that have taken place in Eastern Europe since 1989. He is the author of several books and numerous articles. He has also produced six plays, including three one-man shows, and published a novel.

Part of the Dispatch Books series. Buy the book.

“In a chilling, thoughtful, and intuitive warning, foreign policy analyst Feffer (Crusade 2.0) takes today’s woes of a politically fragmented, warming Earth and amplifies them into future catastrophe. Looking back from his hospital bed in 2050, octogenarian geo-paleontologist Julian West contemplates his fractured world and estranged family. West is writing the follow-up to his bestselling 2020 monograph, Splinterlands, in which he analyzes the disintegrated international community. By 2050, the refugee-saturated European Union has collapsed; the countries of Brazil, Russia, India, and China have splintered; and Washington, D.C., is gone, destroyed by Hurricane Donald in 2022. There are water wars, imitation foods made from seaweed, inequality, disease, and sleeper terrorists. On a virtual reality trip to make amends, West visits his children—professor Aurora in a deteriorating Brussels rampant with kidnappings; wealthy opportunist Gordon in Xinjiang, no longer part of China; and freedom fighter Benjamin in prosperous Botswana. His ex-wife, Rachel, lives in a commune in a snowless Vermont, now a farming paradise. Lending credibility to his predictions, Feffer includes footnotes from West’s editor written around 2058. This novel is not for the emotionally squeamish or optimistic; Feffer’s confident recitation of world collapse is terrifyingly plausible, a short but encompassing look at world tragedy.”
—Publishers Weekly, Starred Review

“Feffer’s book is a wild ride through a bleak future, casting a harsh, thought-provoking light on that future’s modern-day roots.”
—Foreword Reviews

“Readers who enjoy dystopian stories that hold more than a light look at political structures and their downfall will more than appreciate the in-depth approach John Feffer takes in his novel.”
—Midwest Book Review

“Splinterlands is a short and powerful dystopian novel, framed as an all-too-credible account of what might happen in our lifetimes.”
—Climate and Capitalism

“John Feffer is our 21st-century Jack London, and, like the latter’s Iron Heel, Splinterlands is a vivid, suspenseful warning about the ultimate incompatibility between capitalism and human survival.”