What does Trump stand for? His statements and his actions say he stands for racism, white supremacists, hate crimes, conspiracy theories like QAnon, Russian aggression…

Trump is clearly motivated to limit his legal exposure when he leaves the White House. Trump and his personal attorney and attorney general Bill Barr drew attention to this while forcing out US attorney Geoffrey Berman, the lead federal prosecutor for Southern District of New York. Now the US attorney for Eastern District of New York, Richard Donoghue, is stepping down to take another position in the Department of Justice. In January US attorney for the District of Columbia, Jessie Liu, left her position. These three offices control to range of investigations and cases that represent risk to Trump and associates like Rudy Giuliani. Barr’s actions have seriously eroded the independence and integrity of his Justice Department.

Trump faces new serious questions about his relationship with Putin as news reports question whether Russia paid bounties to the Taliban for US soldiers in Afghanistan. In the course of the months the intelligence was apparently known by members of his intelligence groups there is the question of whether he was informed and how that weighed into his many conversations with Putin over those months including his announcement that he’d readmit Russia to the G-7.

At the same time Trump embraces racism and white supremacists he is again offering, “I think we’re gonna be very good with the coronavirus. I think that at some point that’s going to sort of just disappear, I hope.”

The Coronavirus shows no signs of disappearing no matter how much Trump works to ignore it and offer up wishful thinking as a substitute for action. As the Washington Post reported, “Coronavirus infections in the United States surged nearly 50 percent in June as states relaxed quarantine rules and tried to reopen their economies, data compiled Wednesday showed, and several states moved to reimpose restrictions on bars and recreation.”

Trump forced a false choice of reopening to get the economy going or experience a protracted lockdown making everything worse. We now have over 132,000 US deaths from the coronavirus and new cases are on the increase; a huge increase. Focus on the economy requires controlling the spread. Thirty-eight states and territories are seeing increases in new cases, many severe. Canada, Mexico and the European Union are closing their borders to US travelers. Europe has 150% of the population of the US and is averaging about 15,000 new cases per day, the US is now experiencing 50,000 new cases each day. On July 3rd Florida alone reported almost as many new cases as all of Europe.

Trump and VP Mike Pence feel the right way to deal with the coronavirus is to tell us happy stories. Two weeks ago Pence wrote an opinion piece for the Wall Street Journal entitled “There Isn’t a Coronavirus ‘Second Wave.’” Now we have red states like Texas and Florida reluctantly backtracking some aspects of reopening. Likely that will keep unemployment in double digits for a while. 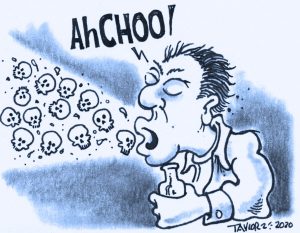 Instead of leading and helping fight the spread, Trump has led the way in making the wearing of face masks a cultural battle. Some Republicans — including Pence — are trying to finally change that message, but given how they’ve fueled the resistance to masks, can they really change behavior?

Subhead: Masks became a political cause for some in the early months of the pandemic. A growing set of Republican leaders are suddenly pushing Americans to wear them

Pence is now frequently seen wearing a mask. “Gov. Doug Ducey of Arizona, facing an uncontrolled outbreak of the coronavirus in his state, made a plea this week: “Arm yourself with a mask.” Good for Pence, Ducey and the population of Arizona as Pence’s visit to Arizona this past week was delayed by a day after several Secret Service agents involved in organizing the trip tested positive. Las week there were news accounts of agents contracting the Coronavirus in conjunction with Trump’s rally in Tulsa.

But notice the states getting attention from the Trump administration. Trump is directing his attention to the swing states, the states that could determine the outcome of the November election.

Subhead: Alex Azar’s travel priorities appear to be related to politics, not the states fighting the worst outbreaks, according to Obama-era officials.

Health and Human Services Sec. Azar deserves much of the credit for Trump’s Coronavirus failure. And here he is, out cheerleading:

“Azar’s frequent visits to swing states — and his consistent promotion of Trump — struck current and former HHS officials as unusually political for a Cabinet secretary, particularly during an outbreak that Azar’s department has struggled to manage.

“Several Obama administration veterans noted that the swing states visited by Azar were not, with a few exceptions, where the outbreak was most serious, suggesting that the health chief was prioritizing politics over helping the states that were most affected.”

Does Azar visits to Wisconsin and Pennsylvania represent the right use of time and resource compared to Florida or Texas?

Is Trump now prepared to do the right thing and encourage responsible behavior? He could have done that during the White House July 4th party, but I’ve found no indication he wore a mask to model new behavior, nor could I find many masks in the assembled crowd. This USA Today article has a gallery of 20 images from the event.

Trump assured the nation he had Marxists on the run, he’s learned how to “put out the flame” of the Coronavirus and assured us there would be a vaccine “long before” the end of the year. There were masks available, but few were worn.

It’s disappointing that Trump is not making a serious effort to change the message, to bridge the cultural divide he’s created. If we stay safe, the people we need to take care of us if we become sick enough to be hospitalized will be safer. Here is a image assembled from photos of some of the many doctors and nurses who have died from Coronavirus.

Doctors and nurses put their own lives at risk to help us. At the very least, we should be able to offer a bit of respect and honor their efforts and wear a damn mask.

In the meantime Trump campaign fund-raiser and girlfriend of Donald Trump Jr, Kimberly Guilfoyle has tested positive for coronavirus ahead of Trump’s Mount Rushmore event.

A pandemic on top of a pandemic?

And finally, there is a new swine flu strain found in pigs in China “with human pandemic potential”.

“What the world doesn’t need now is a pandemic on top of a pandemic. So a new finding that pigs in China are more and more frequently becoming infected with a strain of influenza that has the potential to jump to humans has infectious disease researchers worldwide taking serious notice. Robert Webster, an influenza investigator who recently retired from St. Jude Children’s Research Hospital, says it’s a “guessing game” as to whether this strain will mutate to readily transmit between humans, which it has not done yet. “We just do not know a pandemic is going to occur until the damn thing occurs,” Webster says, noting that China has the largest pig population in the world. “Will this one do it? God knows.””

This is exactly the reason the US needs to support and work closely with the World Health Organization and why US having epidemiologists working in China participating in early investigation of contagions is critical. Instead Trump’s criticism and defunding of WHO efforts is just another political act of deflecting blame for his many — and growing — deadly failures.

A real leader would work to make us safer. Trump does what is best for himself, we are at more risk as a result.