Violence by far-right groups and individuals has emerged as one of the most dangerous terrorist threats faced by US law enforcement and triggered a wave of warnings and arrests of people associated with those extremist movements.

The most recent in-depth analysis of far-right terrorism comes from the Center for Strategic and International Studies (CSIS).

In a report released last week, the Escalating Terrorism Problem in the United States, CSIS analyses 25 years of domestic terrorism incidents and finds that the majority of attacks and plots have come from the far right.

The report says “the majority of all terrorist incidents in the United States since 1994, and the total number of rightwing attacks and plots has grown significantly during the past six years”, with the far right launching two-thirds of attacks and plots in 2019, and 90% of those in 2020.

The report adds: “Far-right terrorism has significantly outpaced terrorism from other types of perpetrators.” The second most significant source of attacks and plots in the US has been “religious extremists”, almost all “Salafi jihadists inspired by the Islamic State and al-Qaida”.

The report shows the far left has been an increasingly negligible source of attacks since the mid 2000s. At that time the FBI defined arsons and other forms of property damage as domestic terrorism during a period some have called the “Green Scare”.

The CSIS study came during a new wave of terror attacks and plots from white supremacist and anti-government extremists.

Last Monday, the Department of Justice announced that it had brought an array of charges, including terrorism related offenses, against a US army soldier who subscribed to a mix of white supremacist and satanist beliefs which are characteristic of so-called “accelerationist” neo-nazis like Atomwaffen Division.

Last week, federal charges were brought on Steven Carillo for the murder of a federal security officer and a sheriff’s deputy. Like the three men arrested for an alleged terror plot in Nevada earlier this month, the FBI says Carillo identified with the extreme anti-government “boogaloo” movement, which is principally concerned with removing government regulation of firearms. … 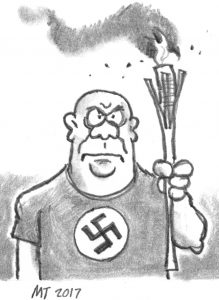 By Mark L. Taylor
Commoner Call (6/29/20)
In 1930’s Germany gangs of Brown Shirts thugs terrorized the Jewish and other minority communities. As this video shows, that is happening here, now. It is the duty of all people — especially white people — of conscience to speak up and against any kind of behavior like this that we may see in our communities.
The right wing militias are organized and increasingly active and operating with the approval of the White House and Republican Party. As we near the election it will get worse. Hopefully, at some point the Democrats will find some spine and begin speaking out forcefully against this true domestic terror threat.
Link To 2-Minute Video
(Commoner Call cartoon by Mark L. Taylor, 2017. Open source and free for non-derivative use with link to www.thecommonercall.org )
*****

How US Military Fails To Address White Supremacy In Its Ranks

An alleged plot by a young solider to coordinate with a neo-Nazi group to attack and kill members of his own army unit has put new scrutiny on the US military’s failure to address violent white supremacy within its own ranks.

Federal prosecutors have announced charges against current or former US military service members for plots linked to violent extremism nearly once a week this month.

A 2019 survey of readers of Military Times, an independent news outlet, found that more that 36% of active-duty troops surveyed said they had personally witnessed examples of white nationalism or ideological-driven racism within the ranks in recent months – a 14% increase from a similar survey the year before.

But in a congressional hearing in February, military officials testified that “mere membership” in white supremacist groups is still “not prohibited” for American service members.

The US Department of Defense prohibited members of the military from “active participation” in white supremacist and other extremist groups since 1996, when decorated Gulf war veteran and white supremacist Timothy McVeigh carried out the Oklahoma City bombing. But “active” participation is still defined as attending rallies or fundraising for a racist group, not being a member, military officials testified in February.

“The potential for placing our service members at risk is so great,” Speier said.

Military veterans have held leadership roles in some of the most prominent white supremacist groups that took part in the deadly rally in Charlottesville, Virginia, in 2017. Investigative journalists and anti-fascist activists continue to uncover new members of violent racist groups who are also current members of the army, the marine corps, the air force and the national guard.

In January, a coast guard lieutenant was sentenced to more than 13 years in prison on gun and drug charges. He was accused by prosecutors of being a white nationalist who was plotting politically motivated attacks against journalists and Democratic politicians.

The same month, a US army veteran and a former combat engineer in the Canadian army reserve were among the alleged members of neo-Nazi group The Base who prosecutors said were discussing plans to create violence at a pro-gun rally in Virginia in order to spark a civil war. …