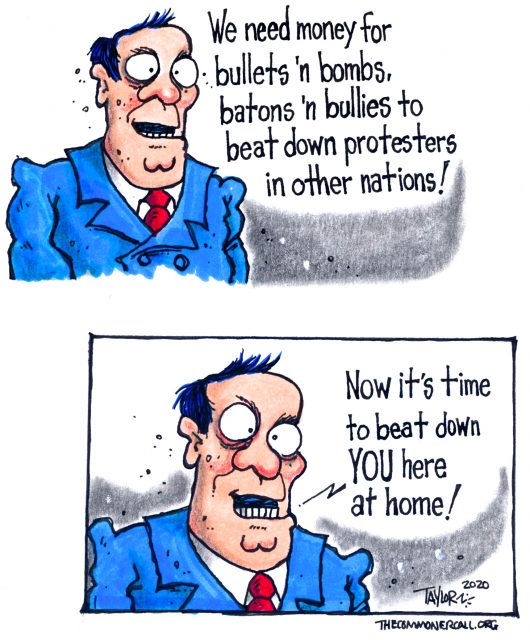 Nationwide uprisings over the police killing of George Floyd have forced a long overdue discussion about the injustices of U.S. policing—an institution that has consistently harassed and terrorized and, in the words of organizer, writer and educator Mariame Kaba, remains a consistent “force of violence against Black people.” As demands to abolish the police are thrust into mainstream discourse, promising—if uncertain and mixed—political changes are being debated and implemented every day. We are seeing a rigorous interrogation of the systems that uphold and compound the brutality of policing: prisons, austerity, and racial housing segregation.

The massive U.S. military budget, which accounts for 38% of all global military spending, not only allows the United States to brutally police the rest of the world, but also adds military might to domestic policing.

The U.S. military, by far the most well-funded in the world, with roughly 800 bases scattered across the globe, must factor heavily into this conversation. The United States already acts as the police force of the world, enforcing violent domination through drone wars, proxy battles, land grabs, meddling and military prisons. This violent system, in turn, reinforces racist policing at home, from the unleashing of counterinsurgency tactics on Black and Brown communities to the use of the Patriot Act to expand the drug war. We cannot talk about reparations for the harms wrought by U.S. police without taking aim at the military—the U.S. government’s global, more than $700 billion police force.

This is not to say U.S. policing is the same as U.S. global militarism, or a call to prioritize critiques of empire over those opposing domestic policing, but rather, to recognize that there is a connection, a feedback loop fueled by racism, surveillance tech and a system that, by its very nature, chooses militarism over social welfare, and domination over democracy. Those in power understand the connection: They routinely exchange tactics, hardware, and systems of social control. Those on the business end of this collective system of oppression should as well.

The many tools of injustice

Here is a non-exhaustive list of the ways in which U.S. militarism fortifies the very police injustices inspiring people to take to the streets today. …