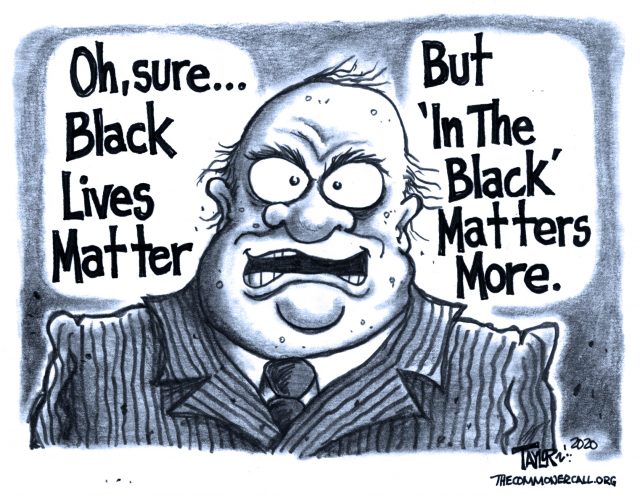 There’s a whole lot of cheap Wall Street listening going on, but not much doing.

Fox News triggered legitimate outrage last week with a graphic showing that the stock market rose after the uprisings that followed the assassination of Martin Luther King, Jr, the acquittal of Rodney King’s attackers, and the murders of Michael Brown and George Floyd. But Fox performed a public service, too, by revealing an underlying truth about our financialized economy: When it comes to profits, Black lives and Black pain don’t matter at all. In fact, they’re often good for business.

Nowhere, perhaps, is that truer than on Wall Street. Bank CEOs have been espousing a limited form of anti-racism lately, while studiously ignoring their own institutions’ record of exploiting African Americans. Instead of confronting systemic or institutional racism—a concept the mainstream media is still struggling to understand—they say they’re listening to personal stories of discrimination and marginalization.

Whenever things get a little hot, they promise to listen.

By all means, those of us who are white should educate ourselves about pervasive racism. But these bank CEOs, like many of us in white America, are eliding the distinction between two very distinct forms of racism.

As Kwame Ture (Stokely Carmichael) and Charles V. Hamilton wrote in their 1967 book, Black Power: The Politics of Liberation:

“When a black family moves into a home in a white neighborhood and is stoned, burned or routed out, they are victims of an overt act of individual racism which most people will condemn. But it is institutional racism that keeps black people locked in dilapidated slum tenements, subject to the daily prey of exploitative slumlords, merchants, loan sharks and discriminatory real estate agents.” (emphases mine)

Ture and Hamilton observed that individual racism “can be recorded by television cameras,” but that the more subtle and “less overt” forms of institutional racism are “no less destructive of human life.”

This has proven true in many areas of the American economy, including the banking sector.

In a series of recent statements, Dimon and his fellow CEOs focused on individual racism—even though Black Lives Matter activists have issued a policy agenda that also addresses systemic racism. The CEOs promised to foster diversity and inclusion in their workforces (hardly a major concession, since their websites and annual statements already pledge to do that.) But what they did, more than anything, was promise to “listen.”

Dimon said that “we are watching, listening and want every single one of you to know we are committed to fighting against racism and discrimination wherever and however it exists.”

Wells Fargo CEO Charlie Scharf’s statement said, “part of our journey is about being able to listen to the experiences of others and having honest, open dialogue across differences.”

Bank of America CEO Brian Moynihan said, “I have listened and learned from all of you, from our communities and, for the last ten years, from my colleagues on the board of the National Museum of African American History and Culture.”

Larry Fink of Blackrock said, “I want you to know that that the firm’s leadership stands with you, and we are listening.”

That’s a whole lot of listening, and not much doing.

JPMorgan Chase paid $55 million to settle charges that it engaged in discriminatory lending through third-party brokers that, according to the government’s lawsuit,  “has been intentional and willful, and has been implemented with reckless disregard of the rights of African-American and Hispanic borrowers.”

A 2015 study[1] looked at racial bias in lending by Wells Fargo in the city of Baltimore. It found that race-based loan differences cost African-American borrowers an additional $15,000 to $16,000 for a 30-year loan, and raised the percentage of foreclosed homes from approximately 10 percent to almost 18 percent. Wells Fargo’s biased practices cost the black communities of Baltimore more than $2 million in lost wealth.

Overall, a study of national lending patterns found that, “Compared to their white counterparts, people of color with similar socioeconomic status and creditworthiness are more likely to be either denied mortgages or steered towards high-cost ones.”[2]

Banks increasingly invested in real estate after the 2008 financial crisis, in what the New York Times called a “$60 billion housing grab.” Wall Street institutions profited off a crisis they created by sweeping up distressed properties.  Larry Fink’s Blackrock was one of those institutions. So was Brian Moynihan’s Bank of America. They’ve done well; their tenants, not so much.

Apparently, banks can be slumlords, too. A lawsuit against Bank of America and a property management firm alleges that they “intentionally failed to provide routine exterior maintenance … in working- and middle-class African American and Latino neighborhoods in 37 metropolitan areas, while they consistently maintained similar bank-owned homes in comparable white neighborhoods.”

The lawsuit, based on years of research, included more than 35,000 photos of “wildly overgrown grass and weeds, unsecured doors and windows, damaged steps and handrails, accumulated trash and debris, unsecured pools, graffiti, and even dead animals decaying in yards.”

And it’s not just an urban phenomenon. Discriminatory lending helped drive 1 million African-American families from their farms in Mississippi and elsewhere in the Deep South. Institutional investors have contributed to the displacement by turning farmland into an “asset class.”

These stories reflect only a small selection of Wall Street’s acts of financial wrongdoing against African Americans. Overall, predatory lending has devastated many African-American neighborhoods across the country, and the harms extend into other economic areas as well, from employment to food scarcity and health.

If they really wanted to “listen,” the CEOs could start by listening to what the Kerner Commission had to say more than fifty years ago, when it pointed to “discriminatory consumer and credit practices” and “inadequate housing” as two of the critical issues facing Black America.

If Wall Street really cared about racial justice it would stop profiteering from institutional racism, and it would return the wealth it has extracted from Black communities. Those communities could then decide how to spend their wealth.

But history has shown us that this country’s elites won’t do anything they don’t have to do. As Frederick Douglass said, “Power concedes nothing without demand.”

Talk is cheap, and listening is even cheaper. Wall Street’s CEOs have had more than enough time to listen. Now is a time for action—if not from them, than from the people themselves.

(Richard (RJ) Eskow is Senior Advisor for Health and Economic Justice at Social Security Works and the host of The Zero Hour with RJ Eskow on Free Speech TV. Follow him on Twitter: @rjeskow )

The 15% Pledge Asked Ten Big Retailers To Support Black Businesses. None Signed Up

As demonstrations against police brutality and systemic racism take over the streets and social media, corporate America has gotten the message that silence is not an option. Cue the flood of corporate statements of solidarity with the Black community over the past week as people across the United States and the world protest the killing of George Floyd, a Black man from Minneapolis who died on May 25 after a white police officer knelt on his neck.

There is a “deep … conversation about racial equity and companies” taking place right now, said Stephanie Creary, an assistant professor of management specializing in identity and diversity at the University of Pennsylvania’s Wharton School of business.

“Even five years ago, six years ago, when we were dealing with the aftermath of the killing of Trayvon Martin and Michael Brown and Eric Garner, we still weren’t getting this type of response from corporate leaders,” Creary said.

But just saying something as opposed to nothing isn’t enough. One article after another published in recent days criticized statements by CEOs and big brands for being, as one Atlantic piece put it, “so vague, they’re meaningless.”

That’s why Aurora James, the Brooklyn-based founder of the sustainable retail store Brother Vellies, started the Fifteen Percent Pledge social media campaign. “You asked how you can help. This is your opportunity,” the campaign’s website said.

The population of the United States is nearly 15% Black. So major retailers should work to ensure the products they sell are representative of this diversity, James argued.

Launched on May 31, the Fifteen Percent Pledge is calling on 10 major retailers to commit to having 15% of the products they sell come from Black-owned businesses. …

“Working-class people pilfering convenience-store goods is deemed “looting.” By contrast, rich folk and corporations stealing billions of dollars during their class war is considered good and necessary “public policy” — aided and abetted by arsonist politicians in Washington lighting the crime scene on fire to try to cover everything up.”

— David Sirota, Who Exactly Is Doing the Looting, and Who’s Being Looted?