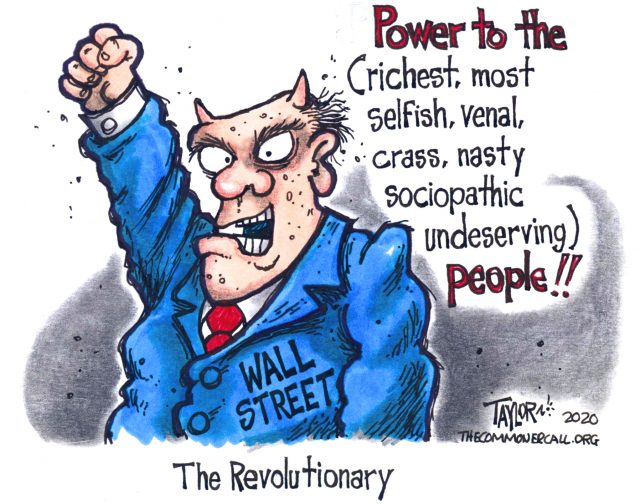 We live in an Orwellian era, in which working-class people pilfering convenience store goods is called “looting.” Rich people stealing hundreds of billions of dollars, on the other hand, is just well-functioning “public policy.”

Headlines this morning are all about looting — specifically, looting in Minneapolis, after the police killing of an unarmed African-American man was caught on video. In the modern vernacular, that word “looting” is loaded — it comes with all sorts of race and class connotations. And we have to understand that terms like “looting” are an example of the way our media often imperceptibly trains us to think about economics, crime, and punishment in specific and skewed ways.

Working-class people pilfering convenience-store goods is deemed “looting.” By contrast, rich folk and corporations stealing billions of dollars during their class war is considered good and necessary “public policy” — aided and abetted by arsonist politicians in Washington lighting the crime scene on fire to try to cover everything up.

To really understand the deep programming at work here, consider how the word “looting” is almost never used to describe the plundering that has become the routine policy of our government at a grand scale that is far larger than a vandalized Target store.

Indeed, if looting is defined in the dictionary as “to rob especially on a large scale” using corruption, then these are ten examples of looting that we rarely ever call “looting”:

This looting is having a real-world effect: as half a billion people across the globe could be thrown into poverty and as 43 million Americans are projected to lose their health care coverage, CNBC reports that “America’s billionaires saw their fortunes soar by $434 billion during the U.S. lockdown between mid-March and mid-May.”

Bipartisan pillaging for the wealthy

Apparently, though, all of that pillaging is not enough. The looting is now getting even more brazen: President Trump is floating a new capital gains tax cut for the investor class, while the New York Times notes that House speaker Nancy Pelosi’s new proposal “to retroactively lift a limit on state and local tax deductions would largely funnel money to relatively high earners.”

We don’t call this “looting” because it is being done quietly in nice marbled office buildings in Washington and New York.

We don’t call this “looting” because the looters wear designer suits and are very polite as they eagerly steal everything not nailed down to the floor.

We don’t call this “looting,” but we should — because it is tearing apart our nation’s social fabric, laying waste to our economy, and throwing our entire society into chaos.

(You can subscribe to David Sirota’s newsletter, “Too Much Information,” here.)

Cornel West Explains Protests By Ripping The Mask Off America

“You’re reaping what you sow!”

Dr. Cornel West joined Anderson Cooper on CNN, explaining exactly why these George Floyd-inspired protests have spawned the way they have.

—Rep. Alexandria Ocasio-Cortez (D-NY), ‘If You Want to End Unrest, End the Conditions That Create It,’ Declares Ocasio-Cortez Amid Nationwide Protest