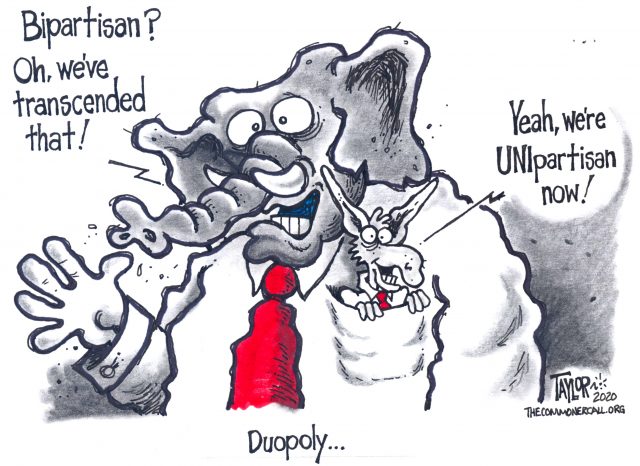 Whatever resistance exists in the nation’s capital, it is so often performance art, rather than anything real.

These are bleak days for America’s progressive movement. The Democratic primary process handed the party’s nomination to the candidate with the most conservative record. Corporate-friendly politicians like the New York governor, Andrew Cuomo, are using the pandemic to brandish their images and install billionaires to run things. Progressive lawmakers in Congress are being steamrolled, even by their own party’s leadership. And a recession is battering the state and local budgets that fund progressive priorities like education and the social safety net.

Perhaps this is a temporary stall-out – a fleeting moment of retreat in a two-steps-forward-one-step-back trajectory. After all, polls continue to show that from workers’ rights to universal healthcare, a majority of Americans support a progressive policy agenda.

The problem, though, is that Democrats in Washington are not just passively failing to mount a strong opposition to Donald Trump – they are actively helping Republicans try to fortify the obstacles to long-term progressive change well after this emergency subsides.

Had the progressives and moderates combined forces on either of the votes, they would have forced the bill back to the drawing board. Instead, their shenanigans ultimately helped secure the legislation’s passage.

This corporate counter-revolution is easiest to see in Democrats’ enthusiastic support for Republicans’ legislative response to the coronavirus crisis. Democrats’ entire 2018 electoral campaign told America that the opposition party needed to win back Congress in order to block Trump’s regressive agenda. And yet, when the Republicans proposed a bill to let Trump’s appointees dole out government cash to their corporate allies with no strings attached, this same opposition party mustered not a single recorded vote against the package. Not one.

Thanks to that, Trump appointees and the Federal Reserve can now hand out $4tn to politically connected corporations as they lay waste to our economy and steamroll progressive reforms. Private equity firms and fossil fuel companies get new tax breaks as they buy elections and try to lock in permanent climate change.

These bailouts were part of a larger legislative package that included good things like expanded unemployment benefits – and so you could argue that Democrats simply had to swallow a bitter pill and vote yes. Except, they subsequently proposed their own standalone legislation that would further strengthen the corporate opponents of progressive reform.

For example, there is the Democrats’ push to alter the so-called paycheck protection program (PPP). Those loans were designed to help employees of mom-and-pop enterprises throughout the country. House Democrats’ new stimulus legislation would open up the small business lending program to what they call “small nonprofits”, but their language was crafted to provide the forgivable loans to industry trade associations. Those lobby groups represent the planet’s biggest corporations – and their political action committees have delivered more than $191m of campaign cash to lawmakers in the last two decades.

Democrats have pitched their legislation as a “message” bill that declares their values – and in this case, they are reassuring Washington power-players that money meant for workers at neighborhood restaurants, local shops and other mom-and-pop concerns can be raided by the front groups representing giant drug companies, health insurers and Wall Street firms. If the legislation passes, it would not merely be an epic tale of greed – the new funding stream for corporate lobbying groups would bolster the very forces that make sure federal policy disempowers workers, maximizes private profit and generally protects the ruling class.

Democrats abandon health care for those in need

It’s an even worse story on healthcare. As 43 million Americans face the prospect of losing private health insurance, Democrats had a huge opportunity. After Trump himself suggested he wanted the government to pay healthcare providers directly for treating uninsured Covid-19 patients, they could have called his bluff and passed existing legislation to expand a Medicare program that provides actual medical care. Instead, House Democrats passed a bill to support lightly regulated private insurance marketplaces and to subsidize existing private insurance plans through a Rube Goldberg machine known as Cobra – and they passed this giveaway just after receiving an infusion of campaign cash collected by insurance lobbyists.

Taken together, these initiatives would route yet more public money through a corporate insurance bureaucracy in hopes that medical care eventually trickles down to Americans who desperately need it. Such a system is totally inadequate during a pandemic: it doesn’t guarantee healthcare – it only only guarantees insurance coverage, which is so often denied or restricted when a medical claim is actually filed. Moreover, corporate health insurance has far higher administrative costs than single-payer programs like Medicare, and even the much-vaunted Affordable Care Act allows insurers to siphon up to 20% of customers’ premiums to corporate profits rather than actual medical care.

But then, Democrats’ Cobra plan is not merely a financial bailout for insurers – it is also a political bailout when the industry needs it most. At a time when popular support for Medicare for All is surging – when even a Republican president feels the need to make rhetorical (if empty) gestures toward the concept of government-funded healthcare – the Cobra plan would use public money to firm up the private health insurance industry’s dominance over the healthcare system, just in time to short circuit a Medicare expansion.

That’s probably why insurance companies have been lobbying for it. They know that such a program would boost their short-term profits, and they know that once such a program is in place, it would be politically difficult to get it repealed and replaced by progressives’ far better Medicare for All program. In other words: Democrats’ Cobra plan may secure insurance companies’ profit-skimming position between Americans and their healthcare providers for decades to come.

The fix is in

If you get the sense that the fix is in and this is all deliberate, you’re not wrong. Many of the self-styled progressive advocacy groups in Washington that posture as #resistance leaders turned a blind eye to the bill’s problems and endorsed the legislation shortly after it was introduced, undercutting progressive lawmakers off the bat.

Making matters worse was the theater on the House floor. During the debate over the Democratic bill, nine progressive lawmakers made a public show of voting against the procedural measure to advance the bill, along with a tiny group of moderates. When it came to the real vote on actually passing the bill, a larger group of moderates ended up voting against it, but only one progressive lawmaker, Representative Pramila Jayapal, voted no. Had the progressives and moderates combined forces on either of the votes, they would have forced the bill back to the drawing board. Instead, their shenanigans ultimately helped secure the legislation’s passage.

Taken together, the spectacle was more confirmation that whatever resistance exists in the nation’s capital, it is so often performance art, rather than anything real. …

(David Sirota is a Guardian US columnist and Jacobin editor at large who served as Bernie Sanders’ presidential campaign speechwriter. He also publishes Too Much Information newsletter.)