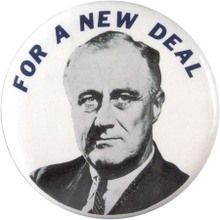 Lessons from the New Deal. It wasn’t one big package wrapped in political consensus. We look at the real, messy process that pulled the U.S. out of the Great Depression.

The Atlantic: “The Lessons of the Great Depression” — “Americans are out of work. More than 20 million lost their jobs in April alone. Lines at food banks stretch for miles. Businesses across the country are foundering. Headlines scream that the coronavirus has brought about the worst economic crisis since the Great Depression.”

New York Times: “Opinion: States Are in Crisis. Why Won’t Trump Help?” — “When most people think of the New Deal, they think of the enduring institutions it created — above all, the web of agencies and programs that has provided the social safety net, such as it is, for life in the United States since the 1950s.”

The Guardian: “Roosevelt’s New Deal offered hope in desperate times. We can do the same now” — “A larger proportion of Americans have lost their jobs during this pandemic than at any time since the Great Depression. In the UK, unemployment increased to 2.1 million in April, and economists expect millions more people to become unemployed once the furlough scheme ends.”

Associated Press: “Out of pandemic crisis, what could a new New Deal look like?” — “The New Deal was really a series of new deals, spread out over more than six years during the Great Depression — a menu of nationally scaled projects that were one part make-work and many parts lasting impact.”

New York Times: “Opinion: The New Great Depression Is Coming. Will There Be a New New Deal?” — “Until very recently, Andrew Yang thought that the need for a universal basic income would be a big issue in the 2024 election, as ‘many of the trends that I campaigned on were going to become completely clear to more and more Americans’ over the next four years.”

USA Today: “What would FDR do? We need a new WPA to fight massive unemployment in the coronavirus era.” — “In January 1935, facing an unemployment crisis not unlike today’s, President Franklin Delano Roosevelt declared in his State of the Union address that the exigencies of the moment demanded a massive, unprecedented public works program that became the Works Progress Administration.”

The Atlantic: “The New Deal Wasn’t What You Think” — “The term Green New Deal might remind Americans of high-school history class. What was the original New Deal about, again? Most kids are taught that it was a decidedly left-wing project to end the Great Depression, a series of big-spending government programs such as the Public Works Administration, with its schools and stadiums.”