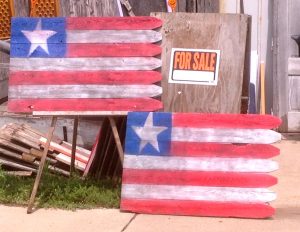 “With heavily armed men in full combat gear occupying the visitors galleries in the Michigan state capitol, we are one trigger-pull away from what happens every day in places like Kabul and Mogadishu and Tripoli. With tens of millions of people out of work, they’re talking about cutting food stamps and canceling the unemployment bonus they just passed. Every day, there is more evidence that nothing is working the way it should in a country gripped by the biggest crisis it has faced in decades.”

What is a failed state? It’s a country that would hire me to make things work.

I learned that the night I made the trip between Kabul and Jalalabad. The main trading route between the countries of Afghanistan and Pakistan was how virtually everything needed in Afghanistan was shipped into the country, from automobiles to food to medicine to fuel to people. You would think that a road carrying such essential trade would be well-paved and cared for, protected by a strong police presence and lined with gas stations, restaurants and motels, the kinds of businesses ordinarily found along such routes.

But in the failed state of Afghanistan, you would be wrong. It was a dusty, potholed dirt road strewn with gigantic boulders (some the size of small cars), lined with fields of unexploded mines, packed bumper to bumper with every means of conveyance known to man, from donkey carts to farm tractors to taxis to interstate buses to tractor trailers. It was a 10-mile-an-hour road, 70 miles from the capital of Afghanistan to one of its most populous cities that typically took seven to eight hours to drive.

I was riding in a kind of mini-SUV, accompanied by a driver, a translator and a photographer. We had had trouble procuring the car, so we were late departing Kabul, leaving in the mid-afternoon. …