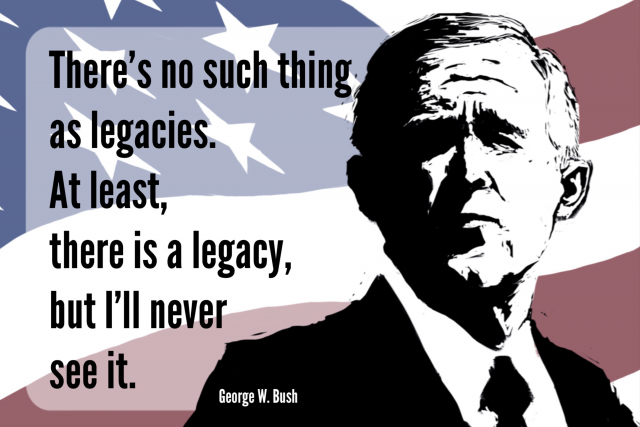 This weekend, George W. Bush released a video calling for national unity during the coronavirus emergency. This video, which has gotten almost 6 million views, prompted an outpouring of praise for Bush by those who pine for his presidency in comparison to our current leader.

Donald Trump deserves a lot of criticism right now. A lot. However, there are ways to rightly and righteously criticize Trump without touting the alleged honor, decency and humanity of George Bush, who was one of the most dishonorable, indecent and inhuman presidents in the history of our country.

I actually can’t believe I even felt the need to type out that last sentence. It should be basic, innate, reflexive knowledge for those who aren’t goldfish forgetting their entire world every 15 minutes.

We shouldn’t allow Bush nostalgia and hagiography to be a thing — and we absolutely shouldn’t respect preening pundits and celebrities who think wistfully longing for Bush is a way to brandish their bipartisan integrity, civility and anti-Trump bonafides.

For all the goldfish out there — and for those who may have been too young to remember the 2000s — let’s review Bush’s record in light of all his talk of bipartisan unity and all the liberal longing for his supposed competence, civility and leadership.

Bush’s presidency began with a terrorist plot whose early warning signs he ignored during his vacations. Bush’s tenure ended with an economic meltdown whose fuse was lit by his administration’s financial deregulation and lax enforcement.

Between those bookends on this sordid shelf of history were other volumes of disastrous malice and epic failure — and Bush hasn’t shown any remorse about any of it.

There was Bush’s Iraq War, based on lies, which killed hundreds of thousands of innocent people, destabilized an entire region and cost America trillions of dollars — a preemptive invasion that was one of the most extreme, radical, dishonest and destructive acts of any commander in chief in all 250 years since the founding of the republic. And Bush wasn’t some innocent bystander — he actively and repeatedly lied, over and over again, and strutted around with bravado slogans like “mission accomplished” and “bring ‘em on” as the bloodshed increased.

There was Hurricane Katrina, in which Bush’s incompetence and personnel decisions effectively allowed a city to drown — all while he defiantly praised his political appointees as the casualties mounted and the disaster worsened.

There was also Bush obediently shilling for the oil and gas industry, playing a pivotal role locking in a climate cataclysm that could kill millions.

A Divider, Not A Uniter

If all that carnage wasn’t enough, Bush insisted he was a “uniter, not a divider” — much like he is depicting himself as a unity figure today. But Bush and his political apparatus polarized politics in the most divisive ways.

This is a guy who presided over a political party that routinely impugned the patriotism of those who spoke out against his policies.

He suggested that Democrats were not sufficiently supportive of efforts to protect Americans from violent terrorism.

He ran a scorched-earth reelection campaign that sought to stir up right-wing bigotry by demonizing gay marriage.

He evaded the military draft and yet stood atop a political machine that vilified a legitimate war hero.

His government trampled the constitution by not only creating a surveillance panopticon, but also a system of actual torture.

This is the dude who got reelected and then immediately launched a polarizing campaign to turn Social Security over to his pals on Wall Street, who had already been enriched by Bush’s own previous two regressive tax cuts.

Rehabing Bush’s Reputation Exemplifies The Pathology That Got Us Trump

I wish Bush as president had been the compassionate voice of reason that he suddenly sounds like in the video. But he wasn’t that president. He was the opposite, and no video — no matter how slick — should allow him to whitewash those facts away. …