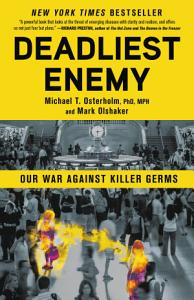 “We are learning how to die with this virus and we have to learn how to live with it.”

The growing COVID-19 pandemic could last up to two years, with a potential second wave in the fall, according to nationally renowned University of Minnesota epidemiologist Michael Osterholm and a team of researchers.

The exact path the disease will take is unclear, but with no vaccine and a global population that had no immunity to the new coronavirus, COVID-19 could follow patterns seen in previous pandemics.

That means that governments will need to continually adjust their pandemic responses to waves of infections, which could have several peaks, rather than a distinct period of illnesses that burns out in a matter of months.

“We are learning how to die with this virus and we have to learn how to live with it,” said Osterholm, director of the Center for Infectious Disease Research and Policy at the U and a frequent infectious disease expert on national cable news programs.

Dr. Anthony Fauci, the nation’s top infectious disease physician, said this week that he thinks a fall wave of new cases was “inevitable.”

Reviewing eight global influenza pandemics over hundreds of years, the researchers noted that three pandemics since 1918 have been characterized by an initial wave of cases in the spring, followed by a larger wave in the fall.

The first wave tends to be concentrated in some areas, subsides during the summer and then becomes widespread in the fall. …

Journalist Yascha Mounk, in an article for The Atlantic as well as a Twitter thread, on Tuesday offered a sobering analysis of the ongoing coronavirus, emphasizing that Americans must prepare themselves for a “darker reality” and realize that “prospects for deliverance” from “this nightmare” are “remote.”

Mounk’s Twitter thread is essentially a condensed version of his Atlantic article, and he lays out his reasons why Americans shouldn’t expect a quick and easy solution to the crisis.

“Three new developments add up to a bleak picture: deliverance is not in sight,” Mounk tweets.

Mounk notes that in recent weeks, he had “three great hopes for how to end the nightmare: (1) fatality rates might be much lower than we thought. (2) An effective treatment could become available soon. (3) We could put an effective test-and-trace system in place.” But the journalist quickly adds that “all three hopes now seem remote” and goes on to explain why. …