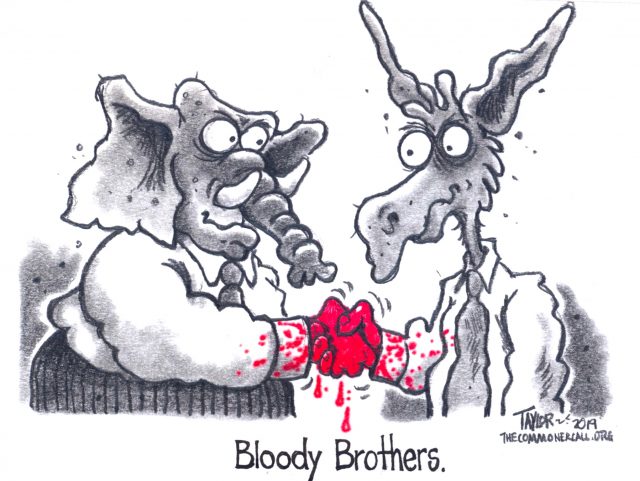 No meaningful care will come from congress or the White House.

[Editor’s Note: The following is commentary I made in the April 24 broadcast of the ‘Month In Review’ on the community-supported radio station WDRT. In the face of a frightening public health emergency, both Republicans and Democrats have — for all practical purposes — abandoned the people. — Mark L. Taylor]

One positive thing the pandemic has done is it has stripped bare the inequity and corruption of  both political parties and made clear the job of the government is not to serve the citizens but the financial benefit of the corporations and wealthy. Of that there can be no doubt.

To date, precious little relief beyond a one-time payment of $1,200 — which many won’t get until August, if ever — and small expansion of unemployment benefits have been provided to working people. Literally trillions of dollars —  of our money — has been directed to Wall Street banks, corporations and the 1%.

Before the pandemic crash, 40% of Americans could not afford a $400 emergency. Only 16% of Americans were able to save 15% for retirement. 27.5 million Americans were without health insurance and many of those with insurance couldn’t afford the copays and deductibles. Despite record productivity, American wages have remained flat in terms of purchasing power since 1978.

At the same time, the three richest men in the United States — Jeff Bezos, Bill Gates and Warren Buffet — own more wealth than the bottom 50% of the nation. Bezos’ wealth increased $24 billion since the pandemic. The top billionaires have raked in $280 billion more during this tragedy. How much wealth do they own now? Has that 50% grown to 55% … 60%? What will be in another month. Or six months?

There will be no income relief. The brutal reality of a bipartisan — Republican/Democrat corporate state and inadequate for-profit medical system has been stripped clear for all to see … and now experience. Our tax money will not be returned to us in any meaningful way to ease the new burdens and pain many are experiencing.

Millions have lost their jobs — and along with it any employer-based health insurance they may have had. While most western industrialized nations are guaranteeing healthcare and some percentage of continued wage for families and even Universal Basic Income, American workers are left pretty much high and dry and formerly secure middleclass families are now lining up overnight in miles-long car queues at charity food banks to get a bag or two of groceries for their families.

On April 1st one-third of rents were not paid. What will that figure be May 1? Many cannot pay mortgages.

It is OUR money

But the corporations and wealthy are doing fine. They are getting huge transfusions of our tax money. The original $2.2 trillion Coronavirus Aid, Relief, and Economic Security Act — disingenuously referred to as the CARES Act — will eventually wind up transferring $4 trillion to $10 trillion to the corporations and the Jeff Bezos’s of the country. By the way, in 2018, Bezos’ Amazon — which has seen an over 20% increase in income with the pandemic — not only paid no federal income tax last year, they got a $129 million federal tax rebate! [Note in the broadcast I accidentally underreported that number. — Ed.]

No, citizens must accept the reality, the pattern is clear: No meaningful care will come from congress or the White House. Trump has said the government will pay for coronavirus treatment, but are you gonna trust that? The democrats support continued COBRA coverage for the employed, but who can afford the high deductibles and copays when they are — you know — unemployed.

There will be no income relief. The brutal reality of a bipartisan — Republican/Democrat corporate state and inadequate for-profit medical system has been stripped clear for all to see … and now experience. Our tax money will not be returned to us in any meaningful way to ease the new burdens and pain many are experiencing. What we are experiencing is what Naomi Klein refers to as the “Shock Doctrine” — or disaster capitalism — when the fear and confusion of manmade or natural disasters are used for the wealthy and powerful to seize more, you know, wealth and power. There is an excellent documentary on the Shock Doctrine that you can find on YouTube.

Ralph Nader once said that “If you don’t do politics. politics will do you.” And that is exactly what we are now experiencing. Together, we need to support each other, and find a new vision to go forward.

The old game and crooked players will not help us.

(Commoner Call column and cartoon by Mark L. Taylor, 2020. Open source and free for non-derivative use with link to www.thcommonercall.org )