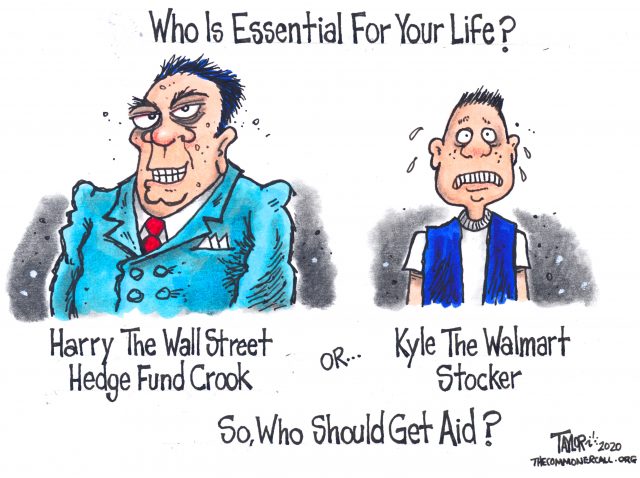 Many Republicans believe economic relief for those without jobs encourages slacking off. But it is grifting corporations that are bailed out again and again.

The coronavirus relief enacted by Congress is barely reaching Americans in need.

This week, checks of up to $1,200 are being delivered through direct-deposit filings with the Internal Revenue Service. But low-income people who have not directly deposited their taxes won’t get them for weeks or months. Worse yet, the US treasury is allowing banks to seize payments to satisfy outstanding debts.

None of this seems to bother conservative Republicans, who believe all such relief creates what’s called “moral hazard” – the risk that government benefits will allow people to slack off.

The Republican senator Lindsey Graham, for example, says state unemployment offices are overwhelmed because the extra $600 is “incentivizing people to leave the workforce”. Hello?

When it comes to big corporations and their CEOs, however, conservatives don’t worry about moral hazard. They should.

Corporations used much of this debt to buy back their own shares of stock. This raised the earnings of each remaining share, creating a bonanza for big investors and top executives.

Trump never tired of pointing out how spectacularly stocks had risen on his watch. But he neglected to mention those stocks were floating on a rising sea of corporate debt – which left corporate America dangerously unprepared for any sharp downturn.

Then came Covid-19 and the sharpest downturn on record.

American corporations spent $730bn on buybacks last year and more than $370bn this year before the virus, much of it financed by debt. If they hadn’t frittered away that trillion or so dollars, they’d be better able to cope with this emergency.

Over the past five years, four big airlines and the aerospace giant Boeing spent more than $70bn buying back their own stock, putting them deep in debt. If they hadn’t binged on buybacks, they’d be better equipped to weather this storm.

No worries. Government is bailing them out, just as it did the Wall Street banks that exploded in 2008.

On 9 April the Fed announced it will buy up corporate debt, even backstopping private-equity firms that also borrowed to the hilt. The treasury secretary, Steven Mnuchin, announced on Tuesday an agreement with the airlines under which they will receive billions of taxpayer dollars.

Forget moral hazard. They’re all too big to fail.

The Fed and the treasury had little choice. Massive defaults and bankruptcies would wreak even more havoc on the economy. Better to maintain some payrolls than add to the unemployment rolls.

But by saving the backsides of big corporations and their CEOs, the bailouts have rewarded corporate America’s obsession with short-term profits regardless of longer-term risks to the corporation, its employees, and the overall economy.

How to protect the public

It’s not too late for the Fed and the treasury to take shares of stock in every corporation that gets bailed out.

This way, CEOs and big investors aren’t rewarded for binging on debt to finance stock buybacks. The public gets in on the upside of any eventual recovery. And there will be more money to finance stronger safety nets for Americans who actually need them.

Another necessary step is to ban stock buybacks – as was the case before 1982, when the Securities and Exchange Commission viewed them as potential vehicles for stock manipulation and fraud.

They still are. Shareholders who unwittingly sell their stocks back to corporations that are artificially pumping up share prices lose out on the gains. Why isn’t this fraud?

A final step must be to regulate credit-rating agencies charged with informing investors about the true riskiness of corporate debt. Why were they still giving high ratings to the bonds of corporations so laden with debt they couldn’t survive a downturn?

The real moral hazard has been in C-Suites, not in homes. It’s time to stop bailing out corporations and start bailing out people.