“There is laughter in Hell.”

— Psychotherapist Esther Perel, We’re All Grieving. This Is How We Get Through It. 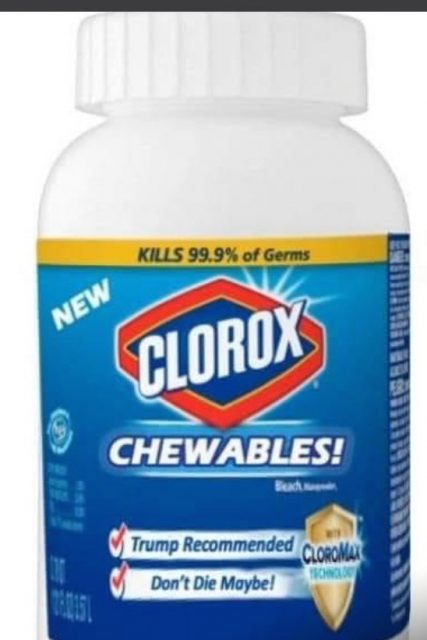 “Please do not ingest or inject disinfectant.
I feel like one should not have to say this.”

Imagine a medical professional cautioning the public to not ingest or inject disinfectant in response to a message from the president of the United States. By any standard 2nd world and 3rd world countries must be shaking their heads in dismay.

There are very important new questions and observations about what we face with the COVID-19 pandemic. I do want to first offer this direct comparison of Trump’s failed leadership as a stark contrast to what we should be hearing.

First, let’s be clear about what Trump said…

And yes, there are reported cases of people self-administering disinfectant.

Trump directed part of his comments directly to Trump Coronavirus Response Coordinator Dr. Deborah Birx. By use of close-up you can maybe feel her pain over such dangerous speculation. But Birx also has a history of coming to Trump’s defense to give Trump more credit than deserved. Here’s how she responds to CNN’s Jake Tapper on Sunday morning, her “let’s move on”, carefully stepping around any rejection of Trump’s comments. The behind-the-scenes discussion is that Birx is “good cop” to the director of the National Institute of Allergy and Infectious Diseases Dr. Fauci’s “bad cop” with their tag-teaming attempt to ‘manage’ the Trump coronavirus message.

The best single way to appreciate all of this is by way of SNL’s Saturday night cold open with actor Brad Pitt as Dr. Fauci. To my taste the humor is appropriately muted and the best part is at the end of the video, offering something we hear sparingly if at all from Trump – compassion, empathy and sincere thanks to our medical front line.

One last view, the New York Post tags Trump with a nickname on their front page from Saturday morning “Trump’s a Total BLEACH BUM”. The nickname will never stick because Trump is a master of daily crisis to wipe his prior day crisis off the front page; the best you can hope for is a ‘nickname du jour’, or ‘nickname por crisis’.

Dr. Birx has offered worse messages such as mirroring Trump’s lie that the coronavirus death rate in the US is low. That is a lie. We do NOT have one of the lowest rates of death in the world.

What all this demonstrates is: “Under Trump, coronavirus scientists can speak — as long as they mostly toe the line”.

And if you do not toe the line, you’ll be fired: “Health Dept. Official Says Doubts on Hydroxychloroquine Led to His Ouster”

Amazing that Trump will runs his daily self-congratulatory remarks under a false premise of coronavirus task force updates, even lying about what he cherry-picks as his defense, and ignoring that the US has one-third of all confirmed coronavirus cases, worldwide: one million of the 3 million, and about one-fourth of the deaths at roughly 58,000 of 206,000.

Maybe ‘Bleach Bum’ was enough, Trump has thrown in the towel, or his unused N95 respirator: “Trump says briefings ‘not worth the effort’ amid fallout from disinfectant comments”

But I agree with Dr. Birx, there is more important news.

There are some troubling new observations and questions with COVID-19. It feels like we both ignore the history of pandemics — as if there was never a 1918 Spanish Flu that killed 50-100 million people worldwide — and look away from ‘uncomfortable’ news about the uniqueness of combatting a coronavirus pandemic.

‘No Evidence’ Yet That Recovered COVID-19 Patients Are Immune, WHO Says

While there is now an emphasis on testing for antibodies the early news is not what we’d hope for. Unlike testing for the presence of the virus, antibody testing uses blood samples to look for signs of past infection and immune resistance against the virus.

The most level statement to date is that testing that “infection can lead to immunity is unproven and thus unreliable as a foundation for the next phase of the world’s response to the pandemic.”

What antibody testing has disclosed is earlier presence of the virus than formally reported in the US. Autopsies for early deaths of two persons in Santa Clara County, CA confirm a February 6 death, earlier than the previously regarded earliest February 29 death in the Seattle area. An anonymous Twitter account identified as Angry (White House) Staffer says his antibody test says, “If I had COVID-19 (as my first antibody test suggests) it was circulating in the US before January.”

The Financial Times on Sunday released an ‘Exclusive’ analysis “of overall fatalities during the pandemic in 14 countries” with a headline, “Global coronavirus death toll could be 60% higher than reported”. The analysis considers dramatic surges in historical death rates consistent with timing of the pandemic. The article is behind a paywall but this suggests a far higher undercount than assumed.

Young and middle-aged people, barely sick with covid-19, are dying from strokes

The article sub-headline notes: Doctors sound alarm about patients in their 30s and 40s left debilitated or dead. Some didn’t even know they were infected.

For those of us who are old enough to be approaching or in the age range of higher risk:

Watch for “several “atypical” symptoms, complicating efforts to ensure they get timely and appropriate treatment, according to physicians.” Symptoms include loss of appetite, sleeping more, confusion and apathy.

And this insight about the high death rate with seriously ill COVID-19 patients:

Consider the sub-head: Once thought a relatively straightforward respiratory virus, covid-19 is proving to be much more frightening.

This from a call of ICU team leaders:

‘One doctor replied that one of his patients had a strange blood problem. Despite being put on anticoagulants, the patient was still developing clots. A second said she’d seen something similar. And a third. Soon, every person on the text chat had reported the same thing.

“’That’s when we knew we had a huge problem,” said Coopersmith, a critical-care surgeon. As he checked with his counterparts at other medical centers, he became increasingly alarmed: “It was in as many as 20, 30 or 40 percent of their patients.’”

“Bizarre” and “unsettling” abnormalities regardless of “age or chronic symptoms…may be explained by severe changes in patients’ blood… some people’s lungs fill with hundreds of microclots. Errant blood clots of a larger size can break off and travel to the brain or heart, causing a stroke or heart attack.”

There have been reports of a high incidence of death rates with patients intubated on respirators and these new insights may be a contributing factor: “Special Report: As virus advances, doctors rethink rush to ventilate”.

Note, the article is NOT saying this is “proof that ventilators have hastened death: The link between intubation and death rates needs further study, doctors say.” In fact the article reports on another troubling phenomena:

“’The disease,” he (Tongji hospital doctor Li Shusheng) explained, “had changed their lungs beyond our imagination.” His colleague Xu Shuyun, a doctor of respiratory medicine, said the hospital adapted by cutting back on intubation.”

And this from guest professor at the University of Göttingen Luciano Gattinoni, a “renowned ventilator expert”:

“’I realised as soon as I saw the first CT scan … that this had nothing to do with what we had seen and done for the past 40 years,” he told Reuters.”

Do note the head of an ICU in Nyon, Switzerland, Thierry Fumeaux offers, “it’s not the ventilator that kills the patient, it’s the lung disease.

All this has to be considered against the pressure to ‘reopen’ in spite of:

If anyone remains indifferent about contracting COVID-19 this cartoonist presents this warning: COVID-19 Diary… “here’s what you might expect to happen”.

Do we learn lessons from history or do we repeat our mistakes? Here’s one 18th century example from spread of the plague. Merchants in Marseille ignored quarantine measures to dock a plague-ridden cargo ship and within two years half the population of Marseille was dead.

I wish for us – let’s not ignore the lessons of the past; this is not the first pandemic. And let’s value the science, learning what is unique and how best to deal with this pandemic. In the mean time…

Take a tour of the Edward Hopper Foundation Beyeler exhibition.

I see the woman in profile looking out a window in ‘Cape Cod Morning’ and I envision the source of her tension as self-isolation.

And consider this funny enactment of Trump’s disinfectant advice; humor is a valuable part of American culture as I offered with the opening quote, so full circle, link here.