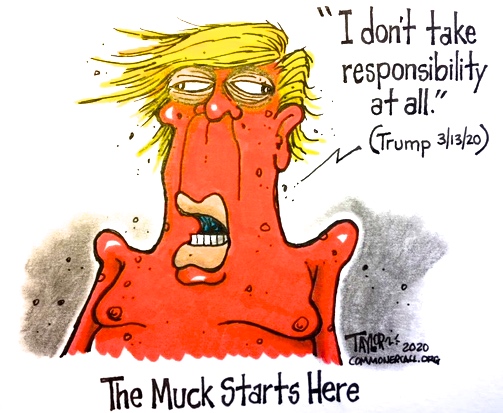 [Editor’s Note: This article has a link to a 1980 Tom Brokow MSNBC interview with Donald Trump in which Trump is extremely well-spoken. He has a wide range of well pronounced vocabulary, speaks in complete sequential sentences and can answer questions directly and succinctly. Compare what you see here to his current degraded mental state. — Mark L. Taylor]

Scores of psychiatric professionals say the latter. Some of their peers — and a large number of laymen — have insisted that the matter can only be settled by a psychiatrist who has personally, privately evaluated the president. That argument has always struck me as nuts.

By all accounts, most GOP Congress members recognize that Donald Trump is a pathological narcissist with early stage dementia and only peripheral contact with reality.

There is no diagnostic blood test or brain scan for narcissistic personality disorder; there’s just a list of observable traits. A mental-health professional simply studies a patient’s modes of reasoning and patterns of behavior, and assesses whether they fit the checklist of symptoms for NPD. It’s absurd to believe that a psychiatrist who has spent a couple of hours talking to a patient in an office is qualified to make this diagnosis — but one with access to hundreds of hours of a patient’s interviews and improvisatory remarks, along with a small library’s worth of biographical information and testimonials from his closest confidants — is not. To insist otherwise is to mystify psychiatric practice; it’s to pretend that there is some shamanistic knowledge that mental-health professionals can only access once you provide them with a co-pay.

Further, whether we choose to label any given psychological profile a “disorder” is always, on some level, a value judgement about what it means to function healthily in our society. If an inability to concentrate on tests can qualify one for psychological dysfunction, then it’s hard to see why Trump’s manifest incapacity to subordinate his hunger for affirmation and attention to basic social norms would not. If a middle-school boy displayed Donald Trump’s level of impulse control in the classroom, there is little question that he would be considered psychologically unhealthy. …

Read The Rest And 4-Minute Video