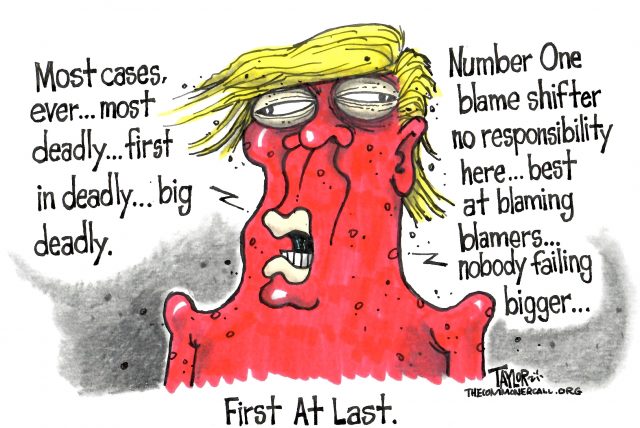 “What a problem. Came out of nowhere.”

That’s how Donald Trump described the coronavirus pandemic in early March, during a televised visit to the Centers for Disease Control and Prevention.

For weeks he had been giving Americans the same advice: “We have it totally under control”; “USA in great shape!”; and, of course, “Fake news”.

But privately, Trump was being warned of a “full-blown Covid-19 pandemic” and “1-2 million” American deaths, according to internal emails, memorandums and other recently unearthed evidence documenting internal deliberations.

It turns out that Trump was personally warned, repeatedly, about the growing crisis beginning in mid-January. But he continued to give false assurances to the American public.

Here’s a timeline of the main notifications Trump received and the disinformation he was simultaneously spreading. …

Trump ridiculed, then minimized, then delayed the federal government’s response to the coronavirus for weeks. Then finally he wrapped his boastful, confused ego around reality. But Trump is actively pushing programs that will endanger more Americans.

Here’s a brief look at Trump’s pro-contagion activities that leave Americans defenseless in the face of the virus, implemented by his crazed and cruel appointees.

Almost no reporters are asking Trump about his reckless, anti-safety policies in the midst of a pandemic that is especially dangerous for victims with pre-existing ailments and sicknesses.

Again, Trump is a clear and present danger to the U.S.A. He is misleading, egomaniacal, unstable, confused, and cannot process information to make decisions carried out properly and quickly.

It’s all in plain sight, Trump voters! Do you think he will exempt you and yours from the dangers noted above? His actions will cause cancer, respiratory diseases, exposure to perilous medicines, loss of insurance coverage, and more. This is what happens when the government places the greedy wants of Wall Street over the basic needs of Main Street.

Trump voters face a harsh daily reality where they live, work and raise their families. One hopes they will finally demand a President who empathizes with peoples’ dire straits   and embraces the Golden Rule. Instead of a President who betrays us while giving sugarcoated campaign speeches and manipulative flatteries. 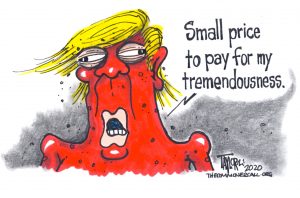 Millions of Americans are in dire need of money to afford groceries, rent, and other necessities amid the coronavirus-induced economic fallout, but the Treasury Department has officially ordered that President Donald Trump’s name appear on the one-time $1,200 stimulus checks set to be mailed to 70 million people, an unprecedented move that could delay delivery of the payments for days.

The decision was finalized late Monday, the Washington Post reported Tuesday night, and it “means that when recipients open the $1,200 paper checks… ‘President Donald J. Trump’ will appear on the left side of the payment.”

“Imagine the kind of sad, egotistical person who would turn this awful crisis into an absurd campaign stunt by demanding their name go into the memo field of a check that was approved by Congress.”

“Trump’s insistence that his name appear on the checks is slowing their delivery,” tweeted former Labor Secretary Robert Reich. “But he wants Americans to be appreciative—even though it was Congress’s idea, it’s taxpayer’s money, and it’s too little, too late.”

Watchdog group Common Cause called the move “a disgusting use of taxpayer dollars to promote the president in an election year.”

“The decision to have the paper checks bear Trump’s name, in the works for weeks, according to a Treasury official, was announced early Tuesday to the IRS’ information technology team,” the Post reported. “The team, working from home, is now racing to implement a programming change that two senior IRS officials said will probably lead to a delay in issuing the first batch of paper checks. They are scheduled to be sent Thursday to the Bureau of the Fiscal Service for printing and issuing.” …