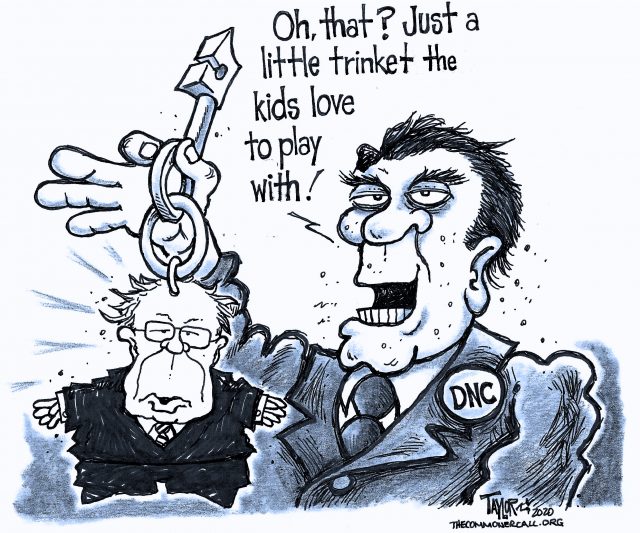 Note: I’ve known Bernie Sanders for 21 years. He’s been a hero for me. I deeply respect his life’s work and he remains an inspiration to me — and no amount of post-election gossip, punditry or backbiting will change that. Working on his campaign was a great honor, and I’ve thanked him and so many others for that experience. What follows are some frank takeaways from the campaign. We did not run a perfect race — and having worked on both winning and losing campaigns, I accept my share of responsibility for that. Lord knows I was hardly perfect — and from the very beginning until the very end, I’ve taken my share of criticism. But I believe that we have an obligation to look back on the painful past because we must always try to learn lessons for the future. – D

If you’ve read the autopsies of the Bernie 2020 campaign in the New York Times, the Huffington Post, the Wall Street Journal, Politico, Buzzfeed or CNN, you’ve probably read a version of a story that goes something like this: pollster Ben Tulchin, co-chair Nina Turner and I were fire-breathing monsters aggressively pushing Bernie to “attack” Joe Biden, Bernie refused to do it, and that’s why Bernie lost.

There are some nuggets of truth in here, but there’s also some fiction — and so it is worth separating the facts from the fantasy, in order to understand a huge-but-little-discussed problem plaguing the Democratic Party that I call the tyranny of decorum.

A Thing That Is True: We Pushed, With Some But Not Enough Success

Yes, it is true — a small group of us with many years of campaign experience pushed Bernie to sharply contrast his own progressive record with Biden’s record of working with Republicans against the Democratic agenda. I’ve been on seven underdog challenger campaigns in my life, and won a few of them — this is campaigning 101: you contrast, or you lose. And with Biden, the contrast was particularly stark.

Even though Biden at times pathologically lied about some of these facts (at one point he actually insisted he didn’t help write his own bankruptcy bill!), this record is verifiable, it is not in dispute. A group of us believed it was important for this record to be spotlighted — because it was good strategy and good for democracy.

Anytime Bernie so much as made a passing mention of one of Biden’s bad votes, there were overwrought accusations that Bernie was “going negative,” hand-wringing warnings about the “perils of going negative,” with Team Biden shedding crocodile tears about “negative attacks.” This transparent bullshit soon became attacks on staffers who dared to point out flaws in Biden’s record.

We didn’t push Bernie to “attack” Biden in some sort of vicious way. We pushed him to instead simply and very explicitly cast the primary as a choice between a vision of progressive change, and Biden’s promise to his donors that “nothing will fundamentally change.”

To his credit, Bernie at times worked with us and embraced the strategy — and when he did, it was successful (see his Social Security contrast with Biden in Iowa, and see his contrast with Wine Cave Pete in New Hampshire).

At other times, though, the campaign backed off and did not seize opportunities to explicitly and continually spell out big differences between the candidates.

Ultimately, Biden was able to avoid having to constantly try to explain his offensive record. Instead, he was allowed to depict himself as a safe, electable “unity” candidate.

Was it fun to always be one of the people pushing the campaign to be more aggressive, and also eating shit on Twitter for supposedly being “toxic” for simply tweeting a few videos of Biden pushing some grotesquely retrograde policy? No, it was not fun. I have more gray hair and less stomach lining because I pushed. I’m no hero or a martyr, but I can tell you it was awful, excruciating and heartbreaking.

But it was necessary.

A Thing That May Or May Not Be True: Winning

Would we have won had we consistently contrasted with Biden? If we’re gonna play shoulda-coulda-woulda, I’d love to say yes. However, I can’t say that with total confidence, because there are so many variables and because Biden was an extremely powerful primary candidate, even if he may not have seemed like it to the average onlooker.

Let’s remember: in the last 65+ years, no current or immediate past vice president has ever mounted a serious run for president and not successfully secured his party’s nomination at least once. That obscure stat evinces a core truth: if given the choice, voters of both parties almost always opt to nominate people who were a heartbeat away from the presidency (and incredibly, with all the talk about “electability,” they have done this even though vice presidents don’t have a great record in general elections).

As a former vice president who once bragged about being one of the most conservative lawmakers in the Senate, Biden had the support of much of the corporate-aligned party establishment, as well as the billionaire class that correctly saw Bernie as an unprecedented existential threat to their economic interests.

That establishment may be weaker than ever — but it is still enormously powerful, especially because so much of the media often echoes its objectives. Some examples: CNN likened Bernie to coronavirus. MSNBC ran an all-out campaign against us. Self-described “fact-checkers” insidiously obscured the facts and deflect criticism of Biden’s very clear record. And as Politico reported, “Biden enjoyed nearly $72 million in almost completely positive earned media” in the pivotal days leading up to Super Tuesday.

Maybe a sharper contrast coulda overcome this, maybe not. I’m not sure.

I am confident, however, that a stronger contrast would have at least put us in a better position to survive when Beto, Klobuchar, and Wine Cave Pete all fell in behind Biden to help him seal Super Tuesday.

In absence of a tough critique early on and with no day-to-day focus on his record, Biden was able to solidify an “electability” argument he didn’t deserve or earn.

Biden won Midwest states that have been ravaged by the trade deals that he himself supported.

Biden even won the most Democratic voters in 11 states who said climate was their top issue, despite his far weaker climate plan.

By the time our campaign was finally comfortable consistently making a strong case against him, it was after Super Tuesday and it was too late.

A Thing That Is Dangerously Untrue: Contrasts Are Bad

If you’ve read this far, I know what you are wondering: what explains Bernie’s resistance to more sharply contrasting with Biden? …