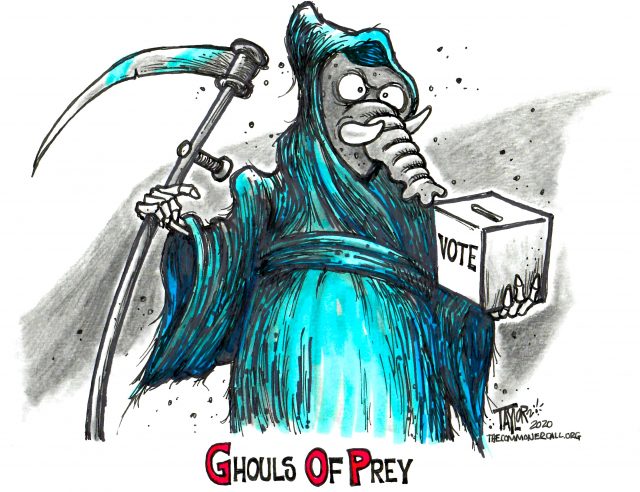 Wisconsin Republicans show they hate both democracy and Wisconsinites.

On Monday, after a bill to delay Wisconsin’s primary languished in the state legislature, Democratic Governor Tony Evers signed an executive order to postpone the state’s primary until June, in light of the COVID-19 outbreak that has already sickened at least 2,440 Wisconsin residents and killed 83 people in the state.

But mere hours later, the Wisconsin Supreme Court ruled 4-2 that the election must go on as planned. (Dan Kelly, the conservative Supreme Court judge up for re-election on Tuesday, abstained from the ruling.) Worse, the court ruled that absentee ballots must be postmarked or hand-delivered to one of the five absentee ballot drop-off locations by Tuesday, overriding a federal judge’s order to extend absentee voting. As of Tuesday morning, the Wisconsin Elections Commission reported receiving just 67% of the absentee ballots requested.

So, what have we learned in all this? We’ve learned that Republicans are not above exploiting a global health crisis to suppress votes, and in fact welcome the opportunity, no matter how many lives they put at risk in the process.

Even if Wisconsin was prepared with the necessary personal protective equipment (PPE), holding a statewide election in the midst of a pandemic would pose a giant risk. But as in many other states, Wisconsin is dealing with a severe PPE shortage. As a result, people who work outside their homes—from home health aides, to construction workers, to grocery store cashiers—risk exposure to the virus. Throwing thousands of voters across the state into that risk pool will not help. It’s not a question of whether Wisconsin voters will get sick as a direct result of Tuesday’s vote, but how many.

Before Evers issued his executive order, Republican state lawmakers had refused to reschedule the election. Thousands of poll workers stepped down to protect themselves from exposure, and Milwaukee—the most populous city in the state—has only five polling locations open on Tuesday, down from 180 polling locations around the city. A video from Tuesday morning showed a line of Milwaukee voters snaking around a polling place, then into a parking lot, then around the block in an attempt to maintain social distancing.

Poll workers across the state are facing an impossible choice: help other Wisconsinites vote, and put themselves and their community at risk in the process, or stay home. “I’m a poll worker in Milwaukee. I’ve been wrestling with what we’re being asked to do tomorrow,” Philip Rocco, an assistant professor of political science at Marquette University, tweeted Monday night. “We’re being asked to put our neighbors at risk. We’re being asked to be infrastructure for an illegitimate election. I refuse to participate.”

The U.S. Supreme Court upheld the state court’s ruling Monday night, with a majority opinion that seemed embarrassed by its own faux naivete: “The Court’s decision on the narrow question before the Court should not be viewed as expressing an opinion on the broader question of whether to hold an election, or whether other reforms or modifications in election procedures in light of COVID-19 are appropriate. That point cannot be stressed enough.” This raises a few questions, namely: What makes Wisconsin so special that it must continue its election as planned, while 15 states have already postponed their primaries? What is the imperative here, outside of giving Republicans a boost via massive voter disenfranchisement?

Vos and Fitzgerald are faces of the modern Republican Party. They don’t practice governance through shows of brute force—not yet, at least—but through the underhanded power plays that have come to define my home state for the past decade. They both played an integral role in the union-busting legislation rammed through by Governor Scott Walker in 2011, and they have fought rabidly to enforce the state’s suppressive voter ID laws. And after Wisconsinites kicked Walker out of office in 2018, Republican lawmakers called a lame-duck session with the explicit goal of stripping Evers of the executive powers Walker was allowed to exercise.

Vos has made his priorities as a public figure abundantly clear. “If you took Madison and Milwaukee out of the state election formula, we would have a clear majority,” Vos said after the 2018 midterm elections. To Vos and his allies, any election results that come out of the state’s two biggest cities are inherently illegitimate because they are Democratic. It is the same sick tautology that props up cries of “fake news!” Inconvenient data isn’t a burden if you decide it’s not real.

It’s no coincidence that Milwaukee, the most populous and diverse city in the state, will bear the brunt of Tuesday’s electoral malpractice. COVID-19 is already hitting black Wisconsinites disproportionately hard. Black residents make up 28 percent of Milwaukee County, yet as of Monday, 33 of the 45 county residents who died of COVID-19—73 percent—were black. This is the monstrous endpoint of the decades-long campaign of hyper-segregation, austerity and disenfranchisement that has pushed black Milwaukeeans to their breaking point.

Republicans—not just in the White House, but in statehouses across the country—are actively working to make their states less safe for their hardest-hit residents. …

I have added a new page. On it, you will find links to a series of 6 spreadsheets that will be updated every day. They contain COVID-19 data from 6 states including Wisconsin, from the county in each of those states with the most cases on April 7th, and from the 10 most populous WI counties. The data comes from the Johns Hopkins Coronavirus Resource Center.

I chose to begin this project after Wisconsin Gov. Tony Evers ordered the April 7 election postponed, and Wisconsin’s Republican legislature sued. The GOP-dominated WI Supreme Court ruled in favor of the GOP legislature, and thousands of Wisconsin voters risked their health and perhaps their lives to vote.

It matters whether such blatantly partisan actions will have an effect on the number of cases and subsequent deaths in Wisconsin. You can find the data here.

“Because democracy is antithetical to today’s Republican Party, Donald Trump has repeatedly condemned voting by mail because he believes it will be disadvantageous to his chances of winning another presidential term in 2020. In the final analysis, Republicans want to make voting more difficult even if it means more Americans will fall ill and die from COVID-19.”