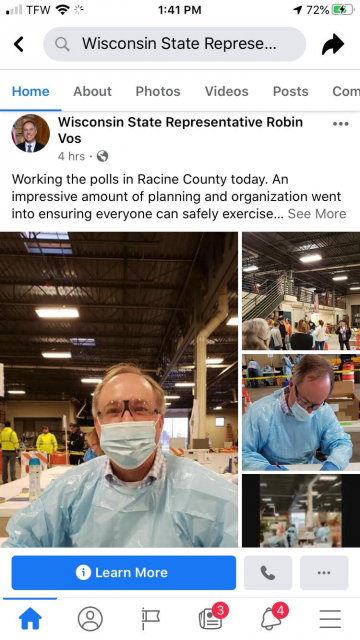 [Editor’s Note: While Mr. Voss was trussed up in protective equipment, voters and most poll workers weren’t afforded the protection Voss got. Watch for an uptick in the number of Wisconsin COVID-19 cases in 7-10 days and in about 20 days an increase in deaths. The Wisconsin Republican Party, state and federal Supreme Courts will hold the moral responsibility for those illnesses and deaths. — Mark L. Taylor]

Proving Republicans will do anything to steal an election – and many Americans really, really hate them – thousands of Wisconsin residents defiantly, stoically, angrily stood in long lines and face masks Tuesday to cast their votes after GOP state legislators and then Supreme Court judges refused to delay an election that threatened both their health and their Constitutional right to vote. The election insanely went ahead amidst a global pandemic and national stay-at-home orders after Wisconsin’s GOP leaders resisted demands to delay in-person voting and expand absentee voting, the Democratic governor issued an executive order to postpone the election, and a GOP state Supreme Court – voting remotely due to the pandemic and the death of irony – overturned the order because, residents noted on social media, “Chaos gives Fascists power” and Wisconsin’s GOP “is officially the most fascist organization in the U.S.” Asked one curious soul, “So how long have #Wisconsin#Republicans been the party of #Lucifer?”

Voter suppression was in especially full swing in Milwaukee, where two-thirds of the state’s black voters live and where many waited in two-hour-plus lines after 97% of polling places closed, leaving just five. The large turnout despite the hardships, with lines persisting after darkness and hard rains fell and the Super Moon rose, prompted many to alternate between anger, pride, inspiration, and anger again. The crowds showed “democracy matters,” they argued, but also that nobody should have to choose between “Vote Or Die.” The day’s two most startling images: Republican Speaker Robin Vos standing in full hazmat garb frantically telling his constituents, “You are incredibly safe to go out!” and people standing outside in pouring rain and lightning during a pandemic to cast their stubborn votes. The election debacle might not technically be a crime, said one resident, but it should be. “If Wisconsin is any indication,” said another, “Americans will have to risk their lives to vote Trump out of office so that he doesn’t kill them while he’s in office.”