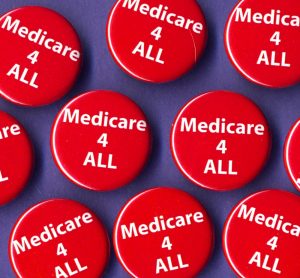 A counterintuitive thing about crises is that they can make very complex issues become very simple, very fast. Physics, for example, is very complex. But when someone throws a brick at your head, you duck. Simple. Likewise, providing health care to an entire country is very complex. But when there is a global pandemic that threatens to kill millions of people at the same time that everyone is losing their jobs, it is clear that you have to just give everyone health care. Any other path is lunacy. You don’t have to be a brilliant health care expert to understand this. You just have to not be owned.

Since the coronavirus crisis began in earnest—since schools and businesses were shuttered across the nation, and sports seasons and concert tours and public events were canceled, and wildcat strikes took place, and major hospitals faced dire equipment shortages, and thousands began to sicken and die, and 10 million people became unemployed in two weeks—not a single major politician has stood up and said, “In light of all this, I now support Medicare For All.” Not a single Republican, of course. But also not a single prominent Democrat. On the contrary, the likely Democratic presidential nominee stood up two days ago and affirmed that he is still opposed to Medicare For All, because “it will not solve” this crisis “at all.” As horrific, unprecedented unemployment figures were released today, the most that Joe Biden could muster was a statement calling for open enrollment in Obamacare.

Americans, with no jobs and no money and the very real threat of imminent death, should be legally permitted to purchase bad and inadequate private health insurance that they cannot afford. That is the position of the party that represents the progressive side of American politics. The other party is just trying to source enough body bags.

The inability of elected leaders to embrace a concept that was previously considered radical but that reality has proven to be necessary is not an ideological problem. It is a problem that is inherent in the existence of an entrenched power structure, which has the effect of narrowing the agreed-upon scope of possibility down to range that can prove to be absurd when times change. It is not as though politicians wake up every morning, check the news and the infection numbers and the economic statistics, and then evaluate the political position “Medicare For All is a bad idea” based upon the new reality of the day. That position is one that was forged over decades by a world order and a set of economic relationships that is being swept away in a matter of weeks. Politicians cannot adapt to that, because achieving their own positions of power has depended on the fact that they can be relied on not to change their positions in a matter of weeks. The only way to get us on the path to where we actually need to go may be to sweep away the politicians themselves.

This is what “The Black Swan” is all about—not the simple idea that unexpected things happen, but the fact that we build entire systems of belief and prediction that do not take into account the fact that unexpected things happen. Then when they do, our beliefs are revealed to be foolish. Politicians who consider themselves to be “moderate” because they support Obamacare rather than Medicare For All are like people who consider themselves safe because they install a security system in their home, without taking into account the fact that they built their home right beneath a volcano that just erupted. Suddenly, the perspective has changed. What could have been justified as a safe and moderate choice is revealed to be awfully short of what is in fact necessary.

This is going to be a transformative moment in American politics, by necessity. Not because the inadequate leaders who currently hold power will be convinced overnight to change the views that got them power in the first place, but because a huge number of Americans are going to get sick and die and lose their livelihoods and be broke and unable to buy the things they need. Millions of lives are going to be destroyed in large part because of the health care system we have built, which links health insurance to your job. …

The coronavirus pandemic and resulting economic collapse could cause a staggering 35 million people in the U.S. to lose their employer-sponsored health insurance over the next several months, with lower-income Americans bearing the brunt of the damage.

That’s according to a report (pdf) released Friday by the research and consulting firm Health Management Associates (HMA). The new analysis warns that, depending on the severity of U.S. job losses, “the number of people receiving coverage from an employer could decline by 12 to 35 million, including both workers and family members.”

The worst-case scenario presented in the report projects a U.S. unemployment rate of 25%—equal to the jobless rate at the peak of the Great Depression. Economists at the Federal Reserve Bank of St. Louis predicted last month that the unemployment rate could reach 32% by the end of June.

“For all the abstracted talk over the last year about health insurance churn, we are likely about to see it on an unprecedented scale in terms of velocity and devastation,” Washington Post reporter Jeff Stein tweeted, referring to the policy debate that emerged in the 2020 Democratic presidential primary over whether the employer-sponsored healthcare system gives people more “choice” than a universal alternative like Medicare for All.

While many people who lose their coverage will be eligible to enroll in Medicaid, the HMA report notes that “one-third of all jobs” are located in states that have opted not to expand the program.

As a result, the report warns, the total number of uninsured Americans could rise from around 28 million today to 40 million, with the impact disproportionately falling on the millions of people living in states that have not expanded Medicaid.

“We need to drop the Medicare eligibility age to 0 right now,” Rep. Alexandria Ocasio-Cortez (D-N.Y.), a vocal supporter of Medicare for All, tweeted in response to the new study.

“Good-quality health care should not be tied to your job,” tweeted Sen. Bernie Sanders (I-Vt.), a Democratic presidential candidate, in response to the new report. “At a minimum, the government must ensure health care for all, without cost, for the duration of this crisis.”

Ryan Cooper, national correspondent for The Week, wrote in a column Friday that “thanks to America’s uniquely boneheaded insistence on tying health insurance to employment,” the U.S. healthcare system “is in very real danger of collapsing altogether” without immediate and sweeping action from Congress.

“Whatever it is, it needs to be big, and it needs to happen yesterday,” wrote Cooper. “The national health insurance system is crumbling more with every day that passes.”