Trump now presides over a country, the United States, representing 25% of the confirmed COVID-19 cases globally. Trump was slow to react enabling the spread of the virus and now putting hotspots like New York City at risk of overwhelming available health care resources.

In an an unprecedented act, Trump has privatized emergency response,  telling states and governors to figure it out and pitting state-against-state for critical resources. Trump’s son-in-law and senior adviser Jared Kushner showed up at a daily briefing to tell us, “the notion of the federal stockpile was it’s supposed to be our stockpile. It’s not supposed to be states stockpiles that they then use.” While trying to process how Trump and Kushner just flipped national emergency response on its head after telling us, “I’ve gotten a lot smarter about this. New York doesn’t need all the ventilators,” we then get Kushner’s helper, Rear Admiral John Plowczyk, telling us he’s going to use FEMA to buy critical medical supplies and then sell these to distributors (private companies) who will then sell these to states and hospitals. Trump places blame with the states saying they should have been creating state stockpiles of equipment before the pandemic.

Trump ignored warnings of a possible pandemic around the first of the year but now shows leadership from behind by telling state governors it’s their fault for not building up stockpiles and getting great prices years ago.

Trump and Kushner literally edited the Dept. of Health and Human Services web site to reflect this butal Animal Farm mentality of covering Trump’s ass over non-action. On Friday the mission statement went from: “When state, local, tribal, and territorial responders request federal assistance to support their response efforts, the stockpile ensures that the right medicines and supplies get to those who need them most during an emergency”, to: “The Strategic National Stockpile’s role is to supplement state and local supplies during public health emergencies.“

Trump’s message is inconsistent, not only has he not demanded all states enact social distancing, as of Saturday he still reverts to his “we can’t have the cure be worse than the problem; we’ve got to get our country open.”

I was open to the idea of networks not covering Trump’s daily self-aggrandizing ‘briefings’ but one pundit pointed out it’s better for all to see the ‘emperor with no clothes’ and sure enough, the small bounce in the polls for Trump has been reversed – by his own lack of leadership.

Trump’s message may be inconsistent, but his behavior is consistent – lie and blame someone else for the problem.

Trump’s consistency is to lie and blame…but don’t forget the cover-up.

Trump signed a $2 trillion congressional economic stimulus bill that includes a $500,000,000,000 part earmarked for propping up industries and companies. One battle that delayed a Senate vote regarded oversight for the use of this money – $500 billion. Trump said he would personally oversee the use of the money and his Treasury Sec. Mnuchin said he’d maybe tell us months later where the money went. Democrats said NO; some limited oversight was defined in the bill.

The appointment of an Inspector General for oversight would normally be apolitical, but we’ve long learned that with trump nothing is normal. Trump announced he will appoint his White House lawyer Brian Miller as Special Inspector General for Pandemic Recovery for the Department of Treasury to prevent fraud and abuse. Miller does have experience as the inspector general for the General Services Administration but he also played a critical impeachment role with the White House (non) response to document requests.

But there’s more Inspector General news – Trump pulled a midnight Friday firing of Inspector General Michael Atkinson, the IG who flagged Trump’s withholding of military aid to Ukraine bringing Trump-Ukraine to light. The firing was done in such a way to avoid a requirement that both congressional intelligence committees be notified 30 days ahead of the removal of the IG.

Trump is not just an incompetent liar, it’s the full breadth of his ineptitude and meanness that we witness.

’No words for this’: 10 million workers file jobless claims in just two weeks

Unemployment numbers like this have not been seen since the Great Depression. Remember the Trumpster refrain of not wanting to pay people to sit at home during this crisis. But it’s not just that.

That’s right – you lost your job, now you lose your health insurance and Trump refuses to provide an opportunity to access the government marketplace. As VP Pence points out, he is ““inspired by the spirit of American businesses” and by health-insurance companies.” Meaning if your state has not expanded Medicaid, tough luck, you’re on your own.

And by way of transition, no, the GOP-led Wisconsin legislature refused to expand Medicaid (again).

In other Wisconsin COVID-19 news, the GOP-led legislature refused — in spite of a state stay-at-home order — to postpone the April 7 election and primary.

“In an extraordinary snub on Saturday, Wisconsin’s Republican-led Legislature collectively shrugged its shoulders at an 11th hour call from Gov. Tony Evers to halt in-person voting, gaveling in and out of a special session in seconds without taking action.”

Milwaukee would typically have 180 polling sites, it will “have just five open.”

There is currently an extension for absentee ballots – “absentee ballots in the state can be returned through 4 p.m. on April 13, nearly a week after in-person voting is still scheduled to take place.” Do note, the GOP is going to court to challenge this extension. The GOP did successfully overturn a provision that would have waived a witness certification – this is required.

Not only is Milwaukee destined to be underserved by polling stations, there is this grim reminder of how during “this pandemic we are seeing the normal pattern of racial disparities playing out in (hyper-segregated) Milwaukee.”

For a Vernon County/Viroqua update we have a new Facebook post from Dr. David Chakoian. He starts with, “It’s working. We’re winning in Vernon County”. Dr. Chakoian credits our adherence to social distancing.

Good for us, and look at this in direct comparison to a governor who follows Trump lock-step, but also consider how there are some Red-state similarities for Wisconsin.

‘It’s a sh— sandwich’: Republicans rage as Florida becomes a nightmare for Trump

But Florida Gov. DeSantis may be no worse than many of his GOP peers; Georgia Gov. Kemp just said he’s implementing some stay-at-home requirements because he just learned — far behind the rest of the nation — the “virus is now transmitting before people see signs.”

The next two weeks will tell us a lot about our success, or failure, with flattening the curve for COVID-19 in the United States. The Institute for Health Metrics and Evaluation (IHME) has provided this online tool for looking at peak timing and resource requirements for the nation and on a state-by-state view.

If you use the drop-box to view New York you can see an early example — one we are experiencing now — for how patient requirements are outstripping resources available.

I was watching a sports channel from London and at the time of a hospital shift change, all paused and went outside to clap and cheer. We’ve seen the same for New York City, deservedly so.

Here is An I.C.U. Nurse’s Coronavirus Diary from a NYC intensive care unit nurse who sees her world from “peace time… because this feels like war.”

Or this, As a doctor, I am willing to do whatever it takes to defeat this virus. Why isn’t Trump? Here is a New York City dermatologist who volunteered to help in an ER. He opens by taking exception to Trump’s emergency equipment excuses including his “We’re not a shipping clerk.” A doctor who puts his life on the line is a direct comparison to Trump’s whining small-mindedness and mean-spiritedness. 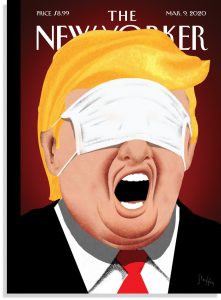 Heroes. The nurse and doctor above. The low-wage workers suddenly thrust into the limelight as essential workers who, if they could afford it, would find it virtually impossible to get replacement health insurance. IF their employer was even providing it.

Trump ignored warnings, downplayed risk, and now wants us to ‘see’ 240,000 COVID-19 deaths as a good outcome. We were going to be back to work and church by Easter – but Trump and crew panicked – Dr. Fauci and polling convinced Trump to stand down. But now he’s back on that message – don’t let the solution be worse than the problem.

You can visualize Trump through the eyes of an adviser, he “took a gamble” downplaying risk and he “got it wrong”. And now thousands — with many more to come — die.

Every decision Trump makes is seen through his filter of how it affects him.

Imagine picking one comment to capture the ineptitude of Trump’s handling of the COVID-19 pandemic. Impossible you say, and I agree, but I will still offer this as a nomination:

“President Trump said on Friday that the Centers for Disease Control and Prevention was urging all Americans to wear a mask when they leave their homes, but he immediately undercut the message by repeatedly calling the recommendation voluntary and promising that he would not wear one himself.”

Brief humor moment – what it is like to now be an “essential worker”.