“They had things — levels of voting that, if you ever agreed to it, you’d never have a Republican elected in this country again.”

— Trump on Fox & Friends decrying Dem ideas to be included in the coronavirus stimulus bill.

The COVID-19 trajectory has the United States on track to be worst in the world.

Trump is finally facing up to what most of us feared was our reality of the coronavirus pandemic. Trump is now saying the United States could see between 100,000 to 240,000 deaths. Only a few days ago he wanted us back to work and back to church by Easter. Now he wants us to know that if only 200,000 people die, it’s confirmation of the great job he is doing because that is now offered as a best-case scenario.

Our reality is sadly a function of Trump’s lack of seriousness over the threat we face. I will stay with this with a few perspectives.

There are a number of points of difference, but the early response by Germany is underscored in the opening paragraphs:

“Late last year — long before most people had heard of the new coronavirus now sweeping the globe — scientists in Germany sprang into action to develop a test for the virus that was causing an unusual respiratory disease in central China.

“They had one mid-January — and labs around the country were ready to start using it just weeks later, around the same time that Europe’s most populous country registered its first case.”

Trump’s ‘who-knew?’ is a lie and a reelection stump speech with no more benefit to us than ‘Build the Wall’. Germany built a test for the virus, Trump tried out new slogans to try to organize public opinion against China, Obama, governors…

Compare Germany to Florida. Trump’s new ‘best-case’ is based on mitigation strategies, namely self-isolation and social distancing; without this, the number of deaths may be far higher. But consider Florida…

Florida Gov. DeSantis has been the good Red-state Trump follower marching in lock-step, Florida with open beaches for Spring Break and Louisiana with Mardi Gras parades are rising on the chart for confirmed COVID-19 cases. Florida cases have doubled in the last four days and DeSantis is still dragging his feet. (Note: by the time I completed this column Florida announced stay-at-home guidelines; all your kids should be back from Spring Break by now.)

According to the CDC, of the states with over 5,000 cases, “Florida is the only one that is not under a statewide “stay-at-home” order”. And this from Tuesday:

“On Tuesday, DeSantis said at a news conference that he had no plans to issue a statewide order because the White House had not told him to do so.

“[then later]…won praise from President Trump who called him “a great governor who knows exactly what he’s doing.””

Just like Trump, DeSantis is now testing travelers from Louisiana and New York – but it’s too late, the virus is here.

“President Donald Trump has been critical of Whitmer’s requests for aid, and her criticism of his administration’s response, referring to her as “the woman in Michigan.” By contrast, he has praised Gov. Ron DeSantis of Florida, where Trump resides, and that state has received multiple shipments of everything it has requested, and is awaiting another, according to FEMA data.”

But even DeSantis doesn’t know when he’ll get the most recent materials requested, which is also his third shipment in two weeks. Almost as if Florida’s 29 electoral votes for reelection might be the key, eh?

Trump is making us collectively stupider but he does have help. Here’s an example of Trump fiddling because…

Trump spent time over two or more days alleging New York hospitals were up to no good based on the number of face masks being requested. This is me being restrained, I’ll just offer the sub-head:

“Trump suggested the sudden massive increase in need for masks might be the result of something nefarious — despite the very logical answer being that we have a global pandemic involving a respiratory disease.

We suffer because of things Trump doesn’t understand or lies about or politicizes – his weaknesses, his faults, his personality disorders – cost lives. 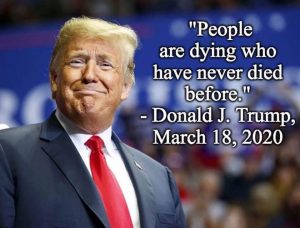 And as we’ve seen with DeSantis, Trump doesn’t operate in ignorance solo.

Falwell Jr. recalled Liberty University students to campus following Spring Break, noting, “I think we, in a way, are protecting the students by having them on campus together.”

Falwell even called the parent of one student, a “dummy”, but it turns out us dummies are right – Liberty University and Lynchburg, VA and the alarms are sounding as a dozen students are sick with symptoms with some already testing positive.

DailyKos suggested Fox is afraid of being sued.

In a nutshell, Fox’s coronavirus coverage has one news reporter victim, Trish Regan, after making a fact-free case of “Coronavirus Impeachment Scam”. Hannity is no more than a cheer-boy for any latest Trump lie.

The latest has Senate Leader Mitch McConnell pardoning Trump over coronavirus because Trump was distracted by Impeachment. No matter that the dates don’t line up or Trump’s dozen golf dates between January 1st and March 8th or nine reelection rallies.

It’s no wonder that 55% have trust issues with Trump’s coronavirus leadership while only 37% trust Trump on “when to relax social distancing guidelines.”

I will offer a summary – if you are out in public, wear a mask. At the very least you signal others you are less likely to transmit should you be asymptomatic. But while science and opinion are of a range – the CDC is edging closer to advising masks could reduce transmission especially where symptoms are not obvious.

You very likely have seen your own articles, but here are some starting with how to make your own and that you do not need an N-95 mask.

Similarly, here’s some clarification around ventilators. A ventilator provides mechanical assist to move air in and out of a patient’s lungs. There is a $20,000-30,000 machine versus a $5,000-7,000 machine (or the $100 machine from MIT from the last edition of the Commoner Call).  Simple distinction is the expensive ICU units synchronize the breathing assist while managing the gas pressure – it’s the less expensive ones that produce some positive pressure that are the easiest target for faster production.

New York is saying it needs 30,000 ventilators – they got 400. General Motors says it can deliver 6,000 by the end of April and production will increase after that – a start and not enough. GM has sourced 95% of required parts and that’s a place where 3D printing can have a positive impact – it is faster to print than it is to develop molds and produce parts in the short term.

One GOP problem with Trump’s riffing is he once again said the part a Republican is not supposed to say out loud:

While riffing about bad economic proposals from Dems on Fox & Friends Trump confessed this:

“The things they had in there were crazy,” Trump said. “They had things — levels of voting that, if you ever agreed to it, you’d never have a Republican elected in this country again.”

I scratch my head wondering if I’ve ever heard Trump offer empathy towards the victims. Imagine instead, he’s accusing  endangered front line medical care givers of heading out the back door with medical supplies.

For us, this is a disaster and will get worse. For Trump, at least in part, it’s a reelection challenge and a battle for those around him to forge policy and response in spite of his ignorance and bias.

If you need a little distraction about now

The first item here is a recipe for making hand sanitizer at home. The second link is WI/IA bird cams for nesting falcons and eagles. The third is a before/after view of how social distancing has changed habits and lives. And last, who doesn’t need Jack Black, Fleetwood Mac and TikTok?

The next two weeks are predicted to be horrific with reports of new cases and deaths.

Do everything you can to be safe.