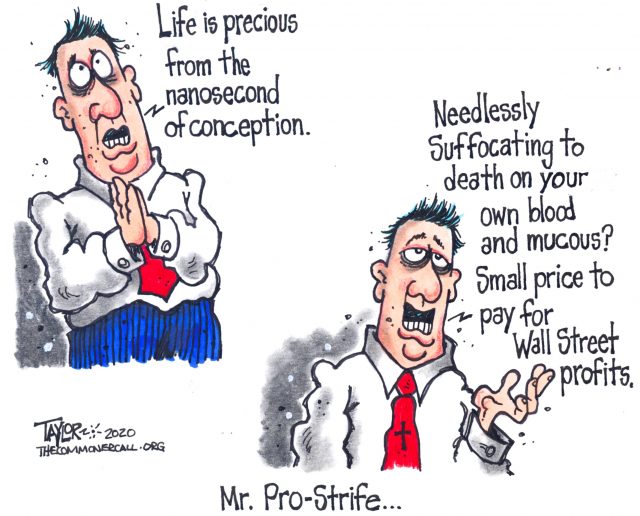 [Editor’s Note: Republican hypocrisy of its anti-abortion policies and propaganda has always been marked by hostility to the programs and funding needed to maintain a quality life beyond the birth canal; you know, little things like housing, health care, child care and education. The hypocrisy has soared to new heights in the Trumpandemic with a ho-hum attitude about sacrificing older citizens on the Altar Of Wall Street benefits. — Mark L. Taylor]

On Fox News Tuesday, commentator Brit Hume leaned into the idea suggested by Texas Lt. Gov. Dan Patrick that the elderly should be willing to sacrifice themselves to coronavirus so younger people can go work and boost the stock market, telling host Tucker Carlson that such an idea was an “entirely reasonable viewpoint.”

NY Governor On Conservatives Who Want To End Social Distancing: Life Is Not ‘Disposable’

New York Gov. Andrew Cuomo (D) dismissed calls Tuesday from President Donald Trump, Republican lawmakers and some conservative pundits for the United States to end its social distancing measures in an effort to spur the economy.

Several states have issued stay-at-home orders, mandated business closures and suspended large public gatherings since the World Health Organization declared the novel coronavirus a pandemic. During a Tuesday press conference, Cuomo decried Trump and his conservative allies who, in recent days, have argued the financial costs of these protective measures are too great.

Several reports have said Trump’s concerns about the economy ― rooted in concern about being reelected in November ― inspired his dismissal of the virus and the disease it causes, COVID-19, throughout the early stages of the outbreak in January. Trump reportedly views a strong economy as his most likely route to victory. …

Don’t Halt Social Distancing. Instead, Do It Right

There are two things the United States must do to beat the coronavirus.

By Aaron E. Carroll (Professor of pediatrics at Indiana University School of Medicine) & Ashish Jha (Professor of Global Health at Harvard University)
The Atlantic (3/23/20)
We are engaged in an effort of social distancing—physically separating ourselves from one another. This is hard, and nearly everyone wants to know when we can stop. Beyond being personally painful, these actions take a massive economic toll: millions of lost jobs, billions if not trillions of dollars of wealth wiped away. It is tempting, at this point, to say that the cure is worse than the disease.
It isn’t. While the cure has large side effects, the disease is worse. The real problem is that we’re taking our medicine haphazardly—and as a result, experiencing all of the side effects and few of the benefits. That needs to change.

We can’t win the fight against COVID-19 just by wishing the virus away. Instead, we need to take two crucial steps. First, we need a true national pause, not the sporadic halts we’ve seen so far. And then, we need to follow it with massive, coordinated testing across the population.

Until we have a vaccine, we can’t expect to eradicate this disease. If we soften our distancing measures too early, we risk making things worse. But if we are willing to do what is necessary, we can get the disease under control.

Over the past week, more and more of the country has started committing to significant physical-distancing measures. Unfortunately, much of the country still has not done so. Spring-break revelers are still on the beaches, and all those partiers will be headed back home, potentially seeding tens of thousands of new infections across the whole country. Some states still haven’t closed schools, potentially allowing for asymptomatic spread through their communities. We still aren’t taking this virus seriously enough.

We are also woefully behind in building up our testing capacity. We can’t tell exactly how badly different areas of the country are being hit; we can only see for sure which hospital systems are being overrun. After infections run rampant, it can take a few weeks before the hospitals get overwhelmed. We saw that in Italy and we’re starting to see that in the U.S.

Worse, despite our inconsistent, at times half-hearted, efforts, some leaders are already losing their nerve. People without medical or public-health expertise are questioning whether physical distancing is worth it. They’re wondering whether it might be better to let this disease just run its course.

That’s a catastrophically bad idea. The human cost would be devastating, and the economic toll from that devastation might be even steeper than what we’re seeing right now. It’s hard for people to understand just how bad an unchecked pandemic could be. More people could die from COVID-19, the disease caused by the coronavirus, in just a few months than have died in every single war this country has fought since its inception. Such devastation would shut down our hospitals and the entire health-care system. Tens of thousands of doctors and nurses and other health-care professionals would likely get sick. The ripple effects on finances, and on human lives, would be massive and uncontrolled. …

(The Atlantic Editor’s Note: The Atlantic is making vital coverage of the coronavirus available to all readers. Find the collection here.)