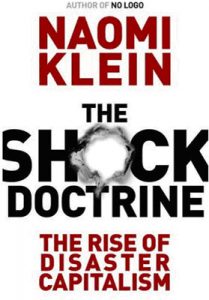 “We know what Trump’s plan is: a pandemic shock doctrine… But the end of this story hasn’t been written yet.”

In a new video from The Intercept, author and activist Naomi Klein explains how the Trump administration and other governments across the globe are “exploiting” the coronavirus outbreak “to push for no-strings-attached corporate bailouts and regulatory rollbacks,” and urges working people worldwide to resist such efforts and demand real support from political leaders during the ongoing crisis.

Klein, author of the 2007 book The Shock Doctrine: The Rise of Disaster Capitalism, notes that President Donald Trump has pushed for a payroll tax cut that could bankrupt Social Security; promised help to major polluters like airlines, cruise companies, and fossil fuel firms that are driving climate disruption; and met with executives of private health insurance companies—in the words of Klein, “the very ones who have made sure that so many Americans cannot afford the care they need.”

“Look, we know this script. In 2008, the last time we had a global financial meltdown, the same kinds of bad ideas for no-strings-attached corporate bailouts carried the day, and regular people around the world paid the price,” says Klein. “We know what Trump’s plan is: a pandemic shock doctrine featuring all the most dangerous ideas lying around, from privatizing Social Security to locking down borders to caging even more migrants. Hell, he might even try canceling elections. But the end of this story hasn’t been written yet.”

“Instead of rescuing the dirty industries of the last century, we should be boosting the clean ones that will lead us into safety in the coming century,” Klein says, pointing to the Green New Deal. “If there is one thing history teaches us, it’s that moments of shock are profoundly volatile. We either lose a whole lot of ground, get fleeced by elites, and pay the price for decades, or we win progressive victories that seemed impossible just a few weeks earlier. This is no time to lose our nerve.”

Klein also discussed the COVID-19 pandemic on the Tuesday episode of Intercepted, a podcast hosted by The Intercept co-founder Jeremy Scahill.

Link To Story And 8+-Minute Video