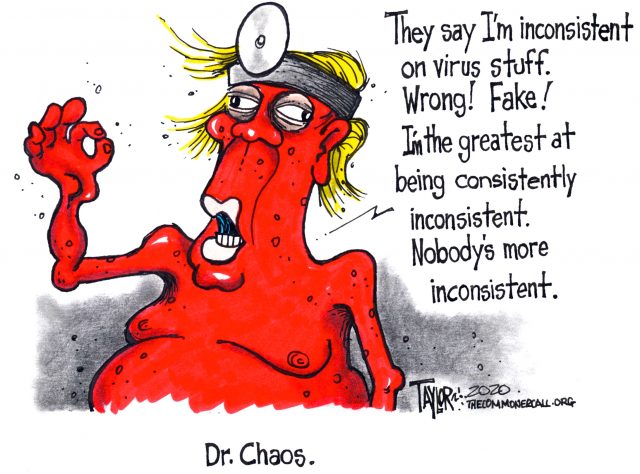 Donald Trump is shrinking before our eyes.

When, in January 2016, I wrote that despite being a lifelong Republican who worked in the previous three GOP administrations, I would never vote for Donald Trump, even though his administration would align much more with my policy views than a Hillary Clinton presidency would, a lot of my Republican friends were befuddled. How could I not vote for a person who checked far more of my policy boxes than his opponent?

It has taken a good deal longer than it should have, but Americans have now seen the con man behind the curtain. The president, enraged for having been unmasked, will become more desperate, more embittered, more unhinged. He knows nothing will be the same. His administration may stagger on, but it will be only a hollow shell. The Trump presidency is over.

What I explained then, and what I have said many times since, is that Trump is fundamentally unfit—intellectually, morally, temperamentally, and psychologically—for office. For me, that is the paramount consideration in electing a president, in part because at some point it’s reasonable to expect that a president will face an unexpected crisis—and at that point, the president’s judgment and discernment, his character and leadership ability, will really matter. …

The Sick Joke Of Donald Trump’s Presidency Has Become Terminal

The coronavirus outbreak has revealed the full stupidity, incompetence and selfishness of the president to deadly effect.

For three long years the world has been treated to the sick joke of Donald Trump’s presidency. Some days were more sick than others. But now the joke is over.

So is the entire facade of the Trump White House: the gold-plated veneer of power and grift will be stripped bare by a global pandemic and recession.

Of all the obituaries we’ll read in the next several weeks, every one will be more meaningful than the political end of a former reality-TV star.

But make no mistake. The humanitarian crisis about to unfold will consume what’s left of this president and the Republican party that surrendered its self-respect and sense of duty to flatter his ego and avoid his angry tweets.

Trump was right about one thing, and only one thing, as the coronavirus started to spread across the world. The sight of thousands of dead Americans will hurt him politically. It will also hurt many thousands of Americans in reality.

For Trump, there is no escaping the stench of failure that seeps through every unmade decision, every fumbled response, and every unhinged tweet. …

They lie through their teeth

With their head up their behind

You open up their hearts

And here’s what you’ll find