“You should never destroy your own credibility. And you don’t want to go to war with a president. But you got to walk the fine balance of making sure you continue to tell the truth.”

“I don’t think that we are going to get out of this completely unscathed. I think that this is going to be one of those things we look back on and say boy, that was bad.”

TRUMP asks a pharmaceutical CEO: “This would be a combination of a vaccine and also it will — put it in a different way — make you better, quicker?”

“The Obama administration made a decision on testing that turned out to be very detrimental to what we’re doing & we undid that decision a few days ago so that testing can take place in a much more accurate & rapid fashion.“

— Trump saying it is all Obama’s fault

“I haven’t touched my face in weeks. I miss it.”

The ‘Party of Stupid’. I even found a snappy new hat for the MAGA cult and a link for ordering. 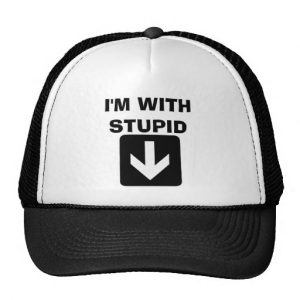 Everything is about his reelection. Right now Trump sees a need to make sure the coronavirus doesn’t cost him reelection. This guy is a threat; he puts us all at risk.

Here is the sub-head to the article below: “The president is pushing to get a Covid-19 vaccine before the election. It doesn’t work like that.”

And here’s the headline:

Trump is repeatedly told it’s a year to 18 months to get a coronavirus vaccine, but in spite of this:

““I mean, I like the sound of a couple months better, if I must be honest,” Trump said, seemingly oblivious to the fact that the “couple months” time frame execs mentioned merely referred to a vaccine being ready for trials.”

Our stable genius persisted, “You take a solid flu vaccine, you don’t think that could have an impact, or much of an impact, on corona?” “No,” one of the experts at the table replied.

Trump of course wandered off to his next reelection rally, this one in Charlotte, and advised the crowd the pharma companies “are going to have vaccines I think relatively soon.”

There is also Trump’s confusion with a vaccine and a treatment for symptoms.

“Therapies are sort of another word for cure,” he said, conflating the two.

But Congress did pass emergency funding on Wednesday after a delay. Democrats want to stockpile the vaccine but the funding was delayed because the Party of Trump took exception to wording holding pharma suppliers to a standard of a ‘fair and reasonable price’.

The Party of Stupid can’t — or won’t — even give us the truth about testing for the virus. In the last edition I pointed out how VP and Coronavirus Czar Mike Pence deliberately answered a question about testing by referring to instances of screening. Screening can be as simple as taking someone’s temperature; it is certainly not a test. The Federal Drug Administration finally announced availability of testing kits – 2,500; though a ‘kit’ provides for 500 tests. Not the 15,000 kits Pence said had been shipped. And of the receiving labs, only about half of the 100 are set up to run the tests. So best case is 1,250,000 tests for 331,000,000 people. Best case – and far less than ‘reported’ by Pence.

Coronavirus testing has been a nightmare. Here’s one woman’s story. Seattle woman with coronavirus symptoms shares her infuriating attempts to get tested

There is more, but maybe you can already see the problem. Of course the problem would be even more obvious to all Americans if not for this decision by Trump’s task force, the one that is charged with protecting us:

That’s right – your briefing is simply still photos of a group of supposedly determined and stalwart people standing behind a podium. When asked why, there was no answer.

Let’s give Trump and Party of Stupid the benefit of the doubt and say they’ve only had two months (January and February) to have a coronavirus response plan in place. Of course that’s satire – two months and no plan would be a crime if only this administration could be held accountable for committing crimes.

It’s clear we have a problem – no competence, lies instead of information, loyalty over effectiveness; speaking of which…

Trump has now rebuilt his intelligence team with unqualified loyalists. His top intelligence person on the National Security Council is a former counsel to loyalist-supreme Rep. Devin Nunes (R-CA).

Trump is once again ready to nominate Rep. John Ratcliffe (R-TX) as his director of national intelligence, having withdrawn the nomination previously over Ratcliffe’s lies over his resume. Trump’s acting DNI is Ric Grenell who has been covered here recently for his utter lack of qualification.

Trump’s Sec. Defense Mark Esper has cautioned his military commanders over making any coronavirus decisions that might ‘surprise’ Trump.

That’s just the tip of the iceberg. In no particular order:

I will close with two Wisconsin Party of Stupid examples. As I predicted in the last edition, should former VP Joe Biden show signs of political life…

“Sen. Ron Johnson (R-Wis.) is preparing to subpoena … in an escalation of the GOP probe … as former vice president Joe Biden’s fortunes are rising in the 2020 Democratic presidential primary.”

And finally… could you be any more politically tone deaf?

This is Wisconsin Supreme Court Justice Daniel Kelly – holding a fund raiser at a shooting range in Waukesha County a day after the mass shooting that claimed six lives including the shooter. Contributions were framed this way:

“The flyer from the Kelly campaign said hosts could give at three levels, including $5,000 for the “50 Cal M2HB” level, a reference to a Browning M2 .50-caliber machine gun.”

Vote. Vote Against The Party Of Stupid.