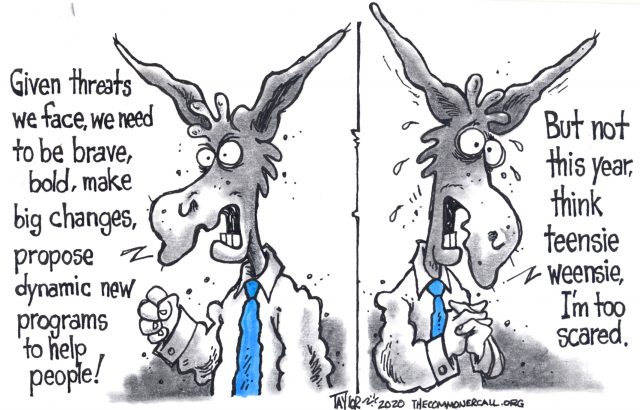 Only unconventional “off the wall” Democrats have won the presidency in the last five decades.

Our party “seems all too anxious to snatch defeat from the jaws of victory, and we will do the same if we nominate” an extremist for our presidential candidate. Moderates “represent the most electable area of the party.” This is not a contemporary pundit or some Democratic Party operative warning about the potential nomination of avowed Democratic Socialist Bernie Sanders. It was the moderate Republican Representative John Anderson warning about the nomination of Ronald Reagan in 1980.

An internal memo by strategists for Democratic President Jimmy Carter showed they welcomed a Reagan candidacy, believing that they could defeat him with a negative campaign of moderates versus right wingers. Reagan won the Republican nomination and then completely thrashed Carter by 10 points in the popular vote and 440 electoral votes.

For decades, Democrats thought they had solved the electability puzzle by regularly nominating moderate and experienced candidates such as Michael Dukakis in 1988, Al Gore in 2000, John Kerry in 2004, and Hillary Clinton in 2016.

Reagan then, like Sanders now, had long experience in deflecting attacks on his alleged extremism. The real problem for the Carter campaign was the lack of a compelling theme for his reelection. An internal memo had a very conspicuous blank in the space reserved for “general encompassing theme.” Whatever you may think of Sanders, among all the Democratic candidates, he has the boldest overarching theme for his campaign.

The pundits and leaders in the Democratic establishment today deeming Sanders unelectable declared the same in 2016 about Donald Trump who would ban Muslims from entering America, build a wall along the southern border, start a trade war with China, and backtrack on fighting climate change. On election night, the pundits twisted themselves into pretzels trying to explain why what they said could not happen actually did.

The truth is that issues and ideology have no real value in predicting the outcome of a presidential election. For decades, Democrats thought they had solved the electability puzzle by regularly nominating moderate and experienced candidates such as Michael Dukakis in 1988, Al Gore in 2000, John Kerry in 2004, and Hillary Clinton in 2016. But what these candidates have in common is that they would all lose to the Republican nominee.

Only unconventional “off the wall” Democrats have won the presidency in the last five decades. Jimmy Carter, Bill Clinton, and Barack Obama were unknown figures outside the party establishment. All had been considered unelectable at one time by pundits and party operatives. Republicans also fared no better with the moderate presidential candidates in recent years. John McCain in 2008 and Mitt Romney in 2012 lost to Obama. Republicans only regained the presidency with the unconventional Trump in 2016.

There is more than history as well. ..

Read The Rest And 45-Second Video