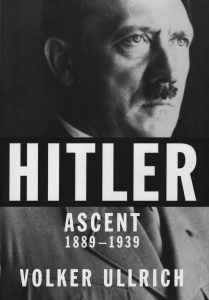 [Editor’s Note: German historian and journalist Volker Ullrich’s amazing 2016 biography of Adolf Hitler is`a stunning account of the rise of Nazism in 1930’s Wiemar Germany, which exposes extremely disturbing parallels to what is happening in the United States now with Trump and the complete transformation of the Republican party into cultism. The Commoner Call will be running short excerpts from the book that have particular resonance to today’s political climate. It is essential to grasp the true, dark nature of the transformation we are seeing in our political climate. — Mark L. Taylor]

“It was astonishing not just how quickly but how easily Hitler turned political Germany its head. ‘All counterweights to his power were suddenly swallowed up and disappeared,’ noted the Romance literature professor Victor Klemperer in his diary as early as March 1933. ‘This complete collapse of the existing powers, worse still their utter absence … has truly shaken me.’ There was hardly any resistance. Instead, almost all institutions and social groups within Germany bent over backwards to accommodate and support the new regime. The process of bringing things and people “into line” — Gleichschaltung — would have never gone so smoothly and successfully had it not corresponded with a widespread wish to be brought into line. Within only eighteen months, Hitler would rid himself of all rivals to power and establish a ‘Führer dictatorship.'”