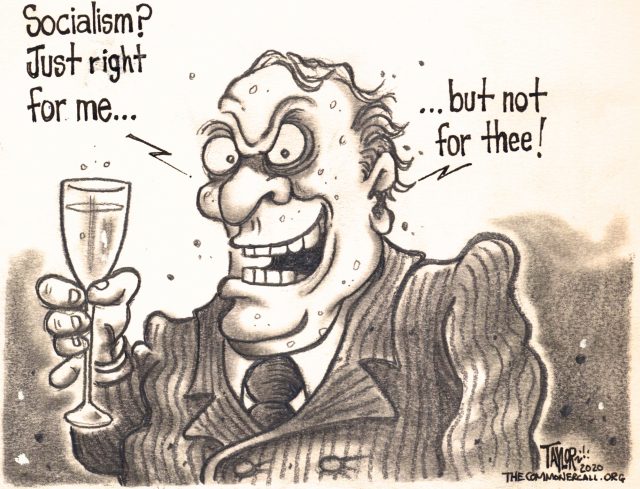 Crooked Donald Trump, the erstwhile failed gambling czar and corporate welfare king, is assailing Bernie Sanders for his “radical socialism.” How ludicrous given Trump’s three-year giveaway of taxpayer assets and authorities to giant corporations – a perfect portrait of crony capitalism.

Bernie knows, of course, how to rebut this distorted interpretation of “democratic socialism.” But will his rebuttals be enough given that the Biden-Bloomberg-Klobuchar wing of the Democratic Party is determined to label Bernie “unelectable” against the boastful Don the Con?

Some suggestions for Bernie and others to use in this upcoming back and forth on “democratic socialism” vs. “corporate socialism” of the super-rich corporations:

The American people of all backgrounds like their public libraries, public local control waterworks, municipal fire departments, police precincts, and public schools. They seem okay with government highways, bridges, public transit, and want their taxes spent to repair and upgrade these vital pieces of our infrastructure. Taxpayers don’t want our commonwealth being owned by tax-escaping, gouging corporations.

There are over 1,000 municipal public utilities providing electricity. The “Red” states of Tennessee and Alabama would fight any corporatization of the Tennessee Valley Authority, which 87 years ago, brought electricity to a large poor region that the private electric companies didn’t think was profitable enough.

A lot of democratic socialists out there

The unfairly maligned Veterans Administration brought free hospitals and health care to millions of veterans. Millions of Americans are favorably disposed to life-saving Medicare and Medicaid and are economically saved by Social Security and unemployment compensation. Hey! There must be a lot of “democratic socialists” out there in “blue” and “red” states. New Hampshirites are mostly okay with state-owned, revenue-producing, hard-liquor retail stores.

At a meeting long ago with top medical officials at the Walter Reed Army hospital, I was told that after learning the second leading cause of hospitalization for U.S. soldiers in Vietnam was malaria, the U.S. Army asked the drug companies to develop remedies. The negative response was that developing medicines to deal with malaria wasn’t profitable enough.  In response, the Pentagon brought together skilled doctors and scientists and started its own “drug company” inside Walter Reed and Bethesda Naval Hospitals. For less than 10 percent of what the big drug companies say it costs, our government developed three out of four of the leading anti-malarial drugs in the world and made them available everywhere without any patents producing big pharma-like profits.

If the political and corporate Trumpsters and the Clintonite Democrats snort at all this, tell them that they do agree on one thing. Those in both these camps have been eager to have collapsing capitalism, as during the 2008 Wall Street dive, always saved by reliable socialism – aka – trillions of taxpayer dollars via Washington, D.C. funding the bailout of the reckless bankers and speculators.