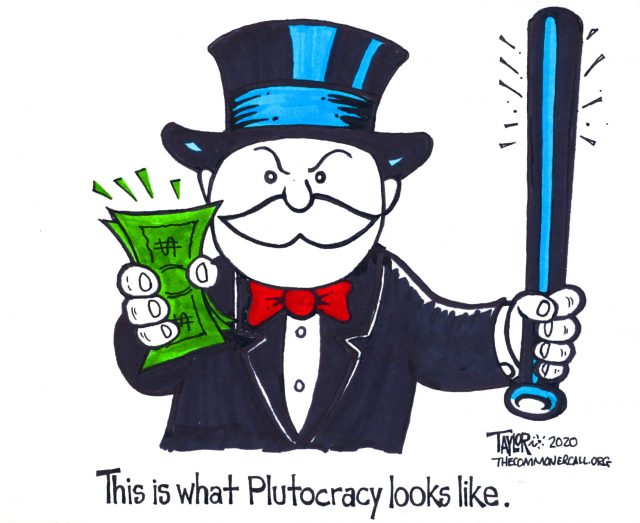 “At some point Bloomberg is mass bribing cable/local news.”

In a staggering milestone in what critics have characterized as an effort to buy the Democratic nomination, billionaire businessman Michael Bloomberg has already poured more than $350 million of his own personal wealth into television, digital, and radio advertising since launching his 2020 presidential campaign last November.

“This is what plutocracy looks like,” author and environmentalist Naomi Klein tweeted Monday in response to a CNN graphic comparing Bloomberg’s ad spending to that of his 2020 Democratic rivals.

No other candidate has spent as much on advertising as Bloomberg, the former mayor of New York City whose net worth is estimated to be over $60 billion. Tom Steyer, also a billionaire, is in a distant second with $178 million in total ad spending—around half of what Bloomberg has already dished out.

“Meanwhile, he did not do what all of the other Democratic candidates do. He wasn’t holding town meetings in Iowa, or New Hampshire, or Nevada, or South Carolina. Those were not important enough for him. He could simply buy the election with hundreds of millions of dollars of ads.” — Bernie Sanders

“Money is not speech,” tweeted progressive activist Kai Newkirk. “Bloomberg’s attempt to buy the presidency is a corruption of our democracy.”

“All that spending has created a windfall for local TV broadcasters, especially in Bloomberg’s top target states—California, Texas, Florida, New York, and Pennsylvania,” CNBC noted. “California and Texas hold their primaries on March 3, aka Super Tuesday. Florida holds its primary March 17, while New York and Pennsylvania hold theirs April 28.”

Wells Fargo analyst Steven Cahall told CNBC that broadcast companies are “jazzed to have Bloomberg in the fray.”

Adam Johnson, writer and host of the Citations Needed podcast, warned in a tweet Monday that “at some point Bloomberg is mass bribing cable/local news.”

“Usually this isn’t an issue because candidates effectively cancel each other out,” wrote Johnson, “but when it gets to $1 billion, $2 billion we’ll have one candidate underwriting the whole TV news industry.”

Due to his belated entry into the presidential contest, Bloomberg bypassed early-voting states and instead focused his attention and money on delegate-rich Super Tuesday states like California and Texas, as well as battleground states like Michigan and Wisconsin.

“We’re in swing states,” Nick Alto, a Massachusetts field director for the Bloomberg campaign, told volunteers in Brookline on Saturday. “We’re in these important states… and with big staffs. Huge operations.”

HuffPost‘s Kevin Robillard reported Tuesday that Bloomberg’s “heavy spending is leading to a rise in the polls.”

“A national Quinnipiac University poll of Democrats and Democratic-leaning independents released Monday found Bloomberg earning 15% of the vote in the primary, essentially tied for third with Warren,” Robillard noted. Sanders led the poll with 25% support.

Sanders, who has been critical of Bloomberg’s candidacy from its inception, told CNN contributor Dean Obeidallah in an interview Sunday that “it really is absurd that we have a guy who is prepared to spend, already, many hundreds of millions of dollars on TV ads.”

“Meanwhile, he did not do what all of the other Democratic candidates do,” Sanders said, referring to Bloomberg. “He wasn’t holding town meetings in Iowa, or New Hampshire, or Nevada, or South Carolina. Those were not important enough for him. He could simply buy the election with hundreds of millions of dollars of ads.”

“That is wrong,” Sanders added. “That is the basic, fundamental problem of American society—is that billionaires have extraordinary wealth and power over the economic and political life of this country.”

Donald Trump is president of the United States. He must lose the next presidential election and leave office. Stakes feel higher than ever, which makes me suspicious of anyone who refuses to support the Democratic presidential nominee in the general election. Well, with one major exception: Michael Bloomberg.

Bloomberg must never become president of the United States. He and Trump are two sides of the same white supremacist billionaire coin. Heads for a national Muslim ban, tails for spying on thousands of Muslims in New Jersey and New York. Actually, Bloomberg is much more explicit in his intolerable views on people of color. Political commentator Benjamin Dixon recently unearthed and shared a clip of Michael Bloomberg’s 2015 speech at the Aspen Institute:

“95% … murderers and murder victims fit one MO. You can just take the description, Xerox it, and pass it out to all the cops. They are male, minorities, 16 to 25. That’s true in New York, that’s true in virtually every city. And that’s where the real crime is. You’ve got to get the guns out of the hands of the people that are getting killed. You want to spend the money on a lot of cops in the streets. Put the cops where the crime is, which means in minority neighborhoods. So one of the unintended consequences is people say, ‘Oh my God, you’re arresting kids for marijuana that are all minorities!’ Yes, that’s true. Why? Because we put all the cops in minority neighborhoods. Yes, that’s true. Why we do it? Because that’s where all the crime is. And the way you get the guns out of the kids’ hands is to throw them up against the walls and frisk them. And then they start, ‘Oh, I don’t want to get caught.’ So they don’t bring the gun. They still have a gun, but they leave it at home.”

The billionaire mayor is not only racist, but wrong. …

If Plutocrat Bloomberg Wants To Be A Patriot, He Should Run As A Republican Against Trump—Not Sabotage Democrats

Presidential candidate Michael Bloomberg is one of the 10 richest persons in the world, with a net worth approaching $60 billion, depending upon the vagaries of the stock and bond markets on any given day.

For anyone who is not a billionaire, it is almost impossible to grasp just how much money this is for a single human being. It would be like calculating the distance of our planet to a distant galaxy in centimeters. Bloomberg could spend $100 million every single day on his presidential campaign between now and election day in November—basically more than any candidate except Bloomberg and fellow billionaire Tom Steyer have spent so far in the entire 2019-20 election cycle—and he would still have a net worth greater than $30 billion. He would remain one of the 30 richest people in the world.

Bloomberg should be running against Trump as a Republican, not a Democrat. If he actually cared about this country more than stroking his massive ego that is exactly what he would be doing.

Think about that. Money basically means nothing to Bloomberg. It makes no material difference to his life—anymore than losing a penny would to most people—to spend all this money. At age 77, why the hell not? And wouldn’t it be fun to be president? You only live once.

Carpet-bombing advertisements instead of democracy

Bloomberg may well be successful. He has already made media corporations hugely profitable by flooding the airwaves with his expensive and slick advertising—he has shown something corporate America knows well: carpet-bombing advertisements works if you can afford it—and this is just the beginning. He has bought off everyone with a pulse so he has a large chunk of the political class on his payroll, with many more to come. He will accordingly get terrific mainstream press coverage, the type any other candidate would like, and Bernie Sanders can’t even begin to imagine.

In short, Bloomberg is demonstrating the deep problems of the U.S. Supreme Court decision that permits candidates to spend unlimited amounts of their own money on their own campaigns, especially in a period of breathtaking wealth inequality. Why be like the Kochs and Sheldon Adelson and spend a fortune on other people running for office? You are the smart guy after all; spend it on yourself.

If Bloomberg is successful, this could well become the new normal. Presidential elections will be contests between the wealthy who put their own money on the line. Bloomberg demonstrates that no one else could possibly compete with them in terms of resources. We are already a way down that road in Congressional elections. The already fading notion that this is a functional democracy will take another sharp turn in the wrong direction. …