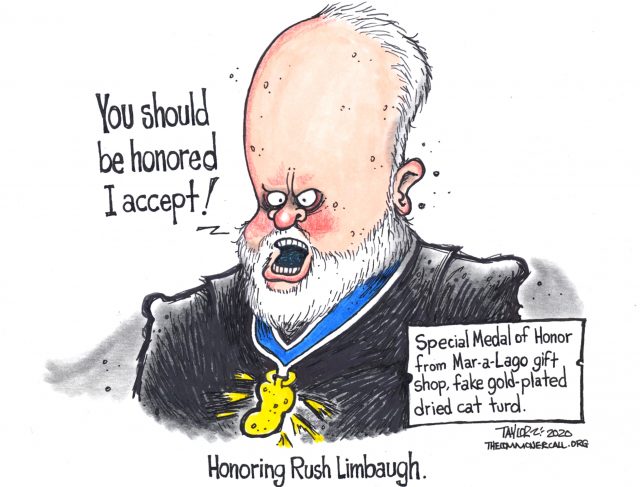 ‘Both Disgusting and Pure Right-Wing Genius.’

Progressives were quick to pounce after President Donald Trump on Tuesday night awarded radio host Rush Limbaugh the Presidential Medal of Freedom in the middle of the State of the Union, pointing out the right-wing provocateur’s long history of bigotry and hate speech and his contribution to poisoning the American political conversation.

Limbaugh announced on his syndicated, widely popular radio show Monday that he has advanced, stage four lung cancer and is undergoing treatment. Trump’s decision to award Limbaugh the medal was reported earlier Tuesday but the radio host still pretended to be surprised.

First Lady Melania Trump hung the medal on Limbaugh’s neck to applause from the GOP side of the chamber.

Intercept journalist Mehdi Hasan called the move a diabolical performance by the president.

“You gotta hand it to Trump. He knows how to keep the base onboard,” tweeted Hasan. “Having Melania present Rush Limbaugh with a Presidential Medal of Freedom (!) in the midst of #SOTU is both disgusting and pure right-wing genius.”

Reaction from the left to the spectacle was a mixture of shock, outrage, and disgust.

“Donald Trump is honoring Rush Limbaugh with the highest civilian honor America can bestow, specifically because Limbaugh spent decades calling feminists ‘Nazis’ and liberals ‘traitors,’ so that when real Nazis and traitors appeared, they were well-camouflaged,” writer A.R. Moxon said on Twitter.

CNN reporter Jim Acosta noted Limbaugh’s long history of racism and hate speech after the president’s address, pointing out that any electoral benefit the president may have hoped to gain from appealing to black Americans was likely undercut by the award.

“He was trying to make appeals to the African-American community,” said Acosta. “It can’t be forgotten he was awarding the Medal of Freedom to Rush Limbaugh, who has a history of making derogatory comments about African-Americans. So I think, you know, overall it’s a wash.”

Derogatory comments is putting it mildly. Limbaugh once told a black caller upset over his rhetoric to call back into the show after she took the “bone” out of her nose. He defended slavery on numerous occasions and made multiple racist comments about black athletes on his show.

Limbaugh also referred to then-presidential candidate Barack Obama as a “Hafrican American,” and played a mocking song called “Barack the Magic Negro.” Barely nine months in the Obama presidency, Limbaugh declared, “In Obama’s America, the white kids now get beat up with the black kids cheering.” In 2011, he accused then-first lady Michelle Obama of “uppity-ism,” and he also promoted a conspiracy theory that “race riots are part of the plan that this regime has.”

With a 32-year-career in hate radio, Limbaugh has made many other comments that are offensive, poisonous, and aimed at stoking white rage.

“Indeed, there were many other conspiracy theories that Limbaugh has promoted in his career, including one about the death of Clinton White House aide Vince Foster. He also claimed that Obama might cancel the 2012 elections or that Obama was both an “African Colonial” or an anti-colonialist (both of which were bad). In 2018, he suggested that mass shootings in New Zealand might have been a false flag attack to smear conservatives. (On that subject, he also alleged, “The people that are shooting up schools more than likely vote Democrat when you get right down to it, if they vote.”) He also suggested that Al Qaeda may have given up Osama Bin Laden “for the express purpose of making Obama look good.””

A truly exhaustive accounting of Limbaugh’s bigotry is beyond the scope of this news article.

Those who have followed his career, however, found the award to be an outrage.

Link To Story And 1+-Minute Video

‘God is working in all this’: Mike Pence Gushes Over Rush Limbaugh

Limbaugh, who announced this week that he has advanced lung cancer, was awarded the Medal of Freedom by President Donald Trump during the State of the Union address, and Pence — a former conservative radio host himself — sang his praises on “Fox & Friends.”

“Rush Limbaugh plowed the way for conservative men and women on the airways of America, not just radio but television,” Pence said. “His contributions to this country, the memorable — and I know for a fact he did not expect the medal last night. I reached him shortly after he and (wife) Catherine left the Capitol, and he was very moved and he told me he was going to spend the rest of his life trying to earn it, and I said, ‘Rush, you have already earned it.’” [Um, no, Mike, you spineless idiot, he hasn’t. He’s the last person to have earned it. — Ed.]

Pence said he and his wife offered their prayers to Limbaugh, whose wife assured the couple that “God was working in all this,” and then the Fox News hosts steered the conversation to Pelosi — who the vice president sharply criticized. …