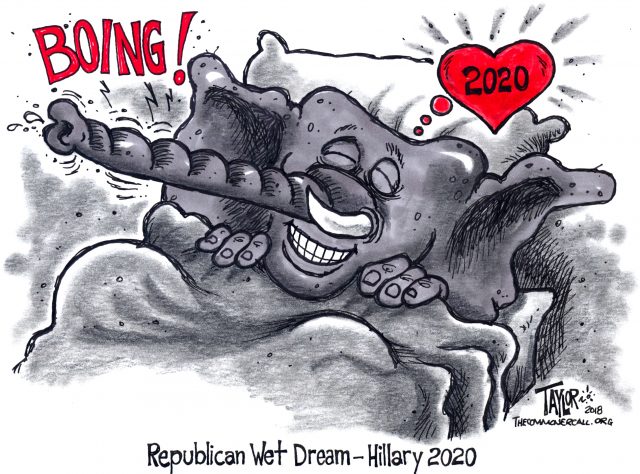 Some of her closest allies have been appointed to the committees overseeing rules and party platforms for this summer’s Democratic National Convention.

[Editor’s Note: This rather breathless, glowing column is by a republican operative who worked in both the Reagan and H.W. Bush administrations and Pentagon. No wonder he is so giddy! — Mark L. Taylor]

A number of people in politics, the media and elsewhere are openly speculating that if Democrats wind up with a “brokered convention,” with no strong or viable nominee evident, Hillary Clinton might enter the arena as the “savior” who could unite the delegates and go on to defeat President Donald Trump.

Clinton herself seemed to throw shade at that theory during an interview with Variety at the Sundance Film Festival. When asked about the “urge” to beat Trump, the former Democratic nominee said, “Yeah. I certainly feel the urge because I feel the 2016 election was a really odd time and an odd outcome. And the more we learn, the more that seems to be the case. But I’m going to support the people who are running now and do everything I can to help elect the Democratic nominee.”

Several politically savvy Democrats have told me that “everything” may be a much more plausible and powerful scenario.

That is, Clinton and/or her team could be negotiating with former Vice President Joe Biden, former New York City Mayor Michael Bloomberg or the last candidate standing to join the ticket as vice president. She would add the gravitas, delegates and, eventually, millions of votes needed to get them over the finish line on Nov. 5. I am assured that Clinton is on every shortlist for that position. …

Read The Rest And 42-Second Video