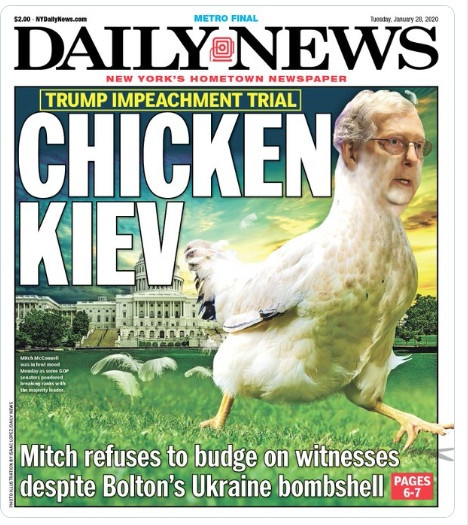 Donald’s Trump’s impeachment trial seems to now turn on whether witnesses will be called to testify, primarily former Trump national security adviser John Bolton. Trump and Senate Leader Mitch McConnell want a speedy vote against the charges, they do not want witnesses, and they most specifically do not want Bolton as a witness.

In a nutshell, a Bolton bombshell based on a draft copy of a book — “A Very Stable Genius: Donald J. Trump’s Testing Of America” — soon to released has Bolton saying he is a first-hand witness to Trump’s quid pro quo with Ukraine.

“Pressure has ramped up to include witnesses after reports that former national security adviser John Bolton says in a book manuscript that Trump directly tied the holdup of nearly $400 million in military assistance to Ukraine to investigations of former vice president Joe Biden and his son Hunter Biden.”

It’s a mystery why that is a shock to any Republican Senator, but no worries, Trump impeachment defense lawyer Alan Dershowitz provides a defense ahead of Bolton as a witness just in case saying Bolton’s allegations wouldn’t meet the test for an impeachable offense.

Where is the argument that Trump ‘didn’t do it’? Trump chief of staff Mick Mulvaney admits Trump did it. The summary of Trump’s ‘perfect’ phone call documents he did it. Trump told us he would do it if he had the chance. No one is saying he did not extort Ukraine for personal gain.

Alan Dershowitz does a 180 and now says he was wrong in his argument to impeach former President Clinton during that impeachment trial, but he’s since changed his mind and is impeccably clear and certain that Trump’s withholding of US aid to Ukraine for personal gain is not impeachable. Now.

As I said in the last Russia Monitor, many Republicans cherry pick and embrace any anti-impeachment vote talking point – and many did that with Dershowitz’s backtracking opinion. This would be a good time to point out Dershowitz’s ties to convicted pedophile Jeffery Espstein or point out that he also stands accused of multiple counts of sexual assault against an underage teenage girl – but in moral gravity-free universe of Trump World that would be dismissed as mud-slinging and a distraction.

I mean this is a trial about Trump’s guilt, not the guilt of his lawyers. If I went down that path I’d have to acknowledge that another Trump impeachment lawyer, Ken Starr has also changed his views on impeachment from Clinton to Trump and that he has his own controversial history with his dismissal by Baylor University for his poor handling of sexual assault charges while serving as president of Baylor.

It’s almost as if a flawed president attracts flawed supporters. Or that lawyers with histories of questionable issues with sexual assaults are…. But not all troubled Trump lawyers face sexual assault challenges, Trump personal lawyer Jay Sekulow stands accused of directing charitable donations to his own family, but not a whiff of sexual controversy. And Trump personal lawyer Michael Cohen is serving time for a federal conviction for tax fraud and lying to investigators, again, not a whiff of controversy over sexual assault. As long as you don’t count his involvement in paying off a porn star over accusing Trump of having an affair while Trump’s son, Barron Trump, was a newborn.

If I went down that road I’d have to give equal time to former Florida attorney general and Trump impeachment lawyer Pam Bondi. Bondi was given the ‘honor’ of ‘trying’ Trump conspiracy charges through allegation, inference, distortions and lies. She earned this ‘honor’ as attorney general having dismissed Florida fraud charges against Trump University. And don’t read any bias into a prior Trump political donation to a Bondi election campaign.

Trump did it. This IS about the defense mounted for Trump; there is no defense about whether he extorted Ukraine president Zelensky for dirt on a political opponent. This is NOT about the behavior of Trump’s lawyers or even their timely changes in perspective on what is an impeachable defense. Trump’s legal defense is about whether what he did is impeachable and that his supporters shouldn’t stand for impeachment because what he did doesn’t warrant such.

Bolton is willing to testify under oath that Trump did it. Trump is not willing to testify under oath, he prefers to resort to his #1 universal defense strategy – tweeting insults. Trump is trying to tweet-shame the guy he put in the position of being his national security adviser, serving for 17 months. If that won’t work, maybe the leverage of keeping Bolton from publishing his book over claims of “top secret information” might influence Bolton.

The high drama of witnesses — and specifically Bolton as a witness — is expected to happen on Friday. It’s unlikely witness testimony would bring a Republican majority Senate to vote for Removal, but the longer this goes, the more the public hears, the more damaging this is to Trump. Imagine if an ill-conceived plot to use US foreign policy to extort a political advantage against an opponent blew up in Trump’s face, turning him from orange to red, and hurt his chances for reelection.

So with that, we will see.