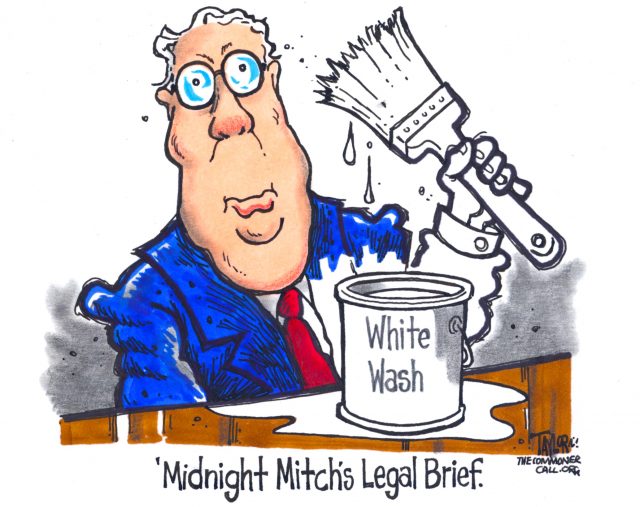 As the U.S. Senate on Tuesday began debating the rules that will dictate the impeachment trial of President Donald Trump going forward, progressive groups continued their denunciation of the proposal put forth by Republican Majority Leader Mitch McConnell who they charge has set the stage for a legal process that will “amount to nothing more than a fact-free sham trial perpetrated in the dead of night.”

That specific characterization was from Karen Hobert Flynn, president of Common Cause, who echoed both Democratic members of Congress and other outside voices who have made clear their belief that McConnell and his fellow Republicans are not interested in offering the American people a transparent look at the facts or upholding their constitutional oath to act as unbiased jurors, but are instead operating to cover for the president.

“Any Senator voting for this proposal is voting to bring shame upon themselves and upon the United States Senate,” said Hobert Flynn. “The trial proposal would not necessarily allow witnesses, hear new evidence, or even admit existing evidence from the House unless a majority of Senators agree to it.”

In his opening remarks Tuesday afternoon as the debate over the rules began, Senate Minority Leader Chuck Schumer asked, “If the president is so confident in his case, if Leader McConnell is so confident the president did nothing wrong, why don’t they want the case to be presented in broad daylight?”

The rules package proposed by McConnell, said Schumer, “is nothing short of a national disgrace.”

An impeachment trial like the one proposed by McConnell, said Hobert Flynn, “would be a rush to a predetermined judgement—a disgraceful judgement condoning the abuse of the powers of the office of the President of the United States. We urge Republican Senators to put their country before their party and reject the show trial proposed by Sen. McConnell. History and the American people are watching.”

While McConnell’s conduct has stirred outrage among those demanding a fair trial—with the impeachment rules sparking the latest McConnell-themed hashtag on social media, #MidnightMitch—journalist Sean Illing wrote for Vox.com that nobody familiar with the Majority Leader will be shocked in the least by what the nation is now witnessing.

For those who don’t know McConnell, Illing explained, “know this: He’s arguably the most ruthless political operator in American politics and has almost single-handedly broken the Senate.” He further noted:

“McConnell has reportedly said in private that he wants a short trial with no witnesses called to testify, and he’s said publicly that the outcome of the trial is basically already determined. Given what we know about McConnell, this isn’t surprising.” …