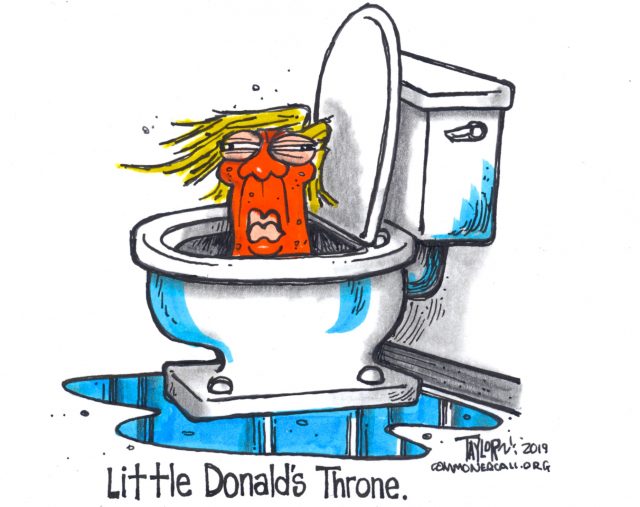 What sounds buffoonish forges a personal connection with his followers.

For Donald Trump, the personal certainly is the political.

He has shown himself to be a malignant narcissist. He is an egomaniac. Trump’s personal obsessions drive most if not all of his behavior. He has no conception, care or concern for most other people.

Trump’s personal and political brand is grievance-mongering and a false narrative of white victimhood. This won Donald Trump the White House and remains the bedrock of his political cult and popularity.

Trump is obsessed with personal slights. As such, like a king, emperor or mob boss, he is fixated on the absolute fealty of his minions. As many of the country’s leading mental health experts have pointed out, Trump is extremely insecure. This in turn fuels his bullying and anti-social behavior.

Donald Trump’s toilet politics are best understood as basic psychology applied to the needs and desires of his followers.

The personal is the political for Donald Trump in the most base and crude ways as well. During the 2016 presidential campaign he repeatedly talked about menstruation as a way of suggesting that women are unpredictable, hyper-emotional and irrational.

Both as an insult to his male rivals and a boast about himself, Trump has publicly bragged about the size of his genitals. He appears fixated on human waste and toilets. As such, his politics are scatological and infantile.

Such themes are the basis of Trump’s 2020 re-election campaign. This is a common feature of right-wing authoritarian movements and their faux “populist” appeal. Historian Ruth Ben-Ghiat explained this in a recent conversation with Salon: “That is the personality cult. For Trump’s rule to work — as with Putin and other autocrats and authoritarians — the leader must be both an everyman and a superman. The leader is a populist in the sense that he speaks the ‘language of the people.’ Almost all of these types of leaders have a sense of humor where they make crude jokes that get people to laugh. Politically incorrect jokes. Their humor is corrosive, of course. But the jokes work in showing that these types of leaders are very much of the people.”

“I’m also approving new dishwashers that give you more water, so you can actually wash and rinse your dishes without having to do it 10 times – four, five, six, seven, eight, nine, 10,” he said, likely attacking Department of Energy regulations.

“Sinks, toilets and showers, you don’t get any water. They put restrictors on and now they made them permanent.

“You go into the shower — and I have this beautiful head of hair, I need a lot of water — and you turn on the water [and] drip, drip, drip. I call the guy, ‘something wrong with this?’ ‘No, sir, it’s just the restrictor’. So you’re in there five times longer than you’re supposed to be, you use probably more water and it’s a very unpleasant experience. We’re getting rid of the restrictors, you’re going to have full shower flow, full sink.”

Our president also has a special obsession with dishwashers. …