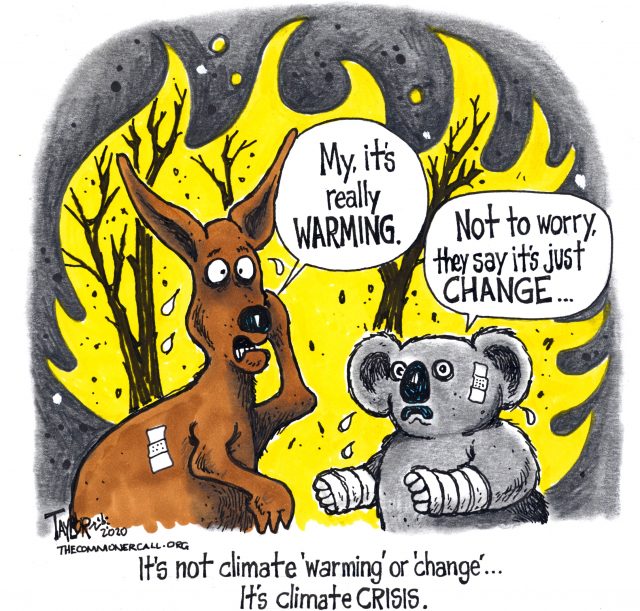 “Recognizing a problem doesn’t always bring a solution, but until we recognize that problem, there can be no solution.”

The weeks long tragedy of uncontrollable wild bushfires racing across Australia leaving thousands of burned out homes and an estimated one billion dead animals in their fiery wake has given what many call a frightening glimpse into our future. While pretty much anyone outside the coal industry and the Republican party recognizes the obvious link between the fires and climate there is a very real problem in the way we refer to the human impact on climate and it begins with the language we use.

The art below is from a TV dinner container… 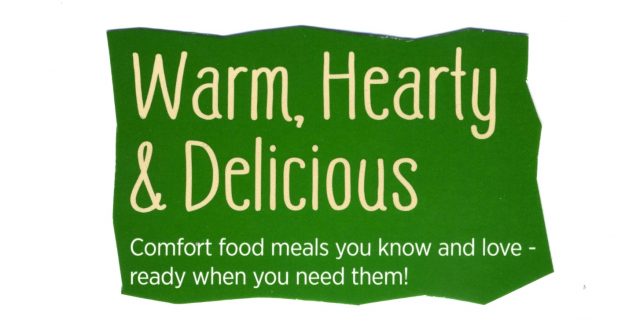 Notice use of the word “Warm” and how it is used along with “Delicious” and “Comfort food.” As anyone who has watched even a few episodes of the Netflix series “Mad Men” can tell you, the choice of those words are not by accident and each relates to and enhances the other. Individually and together they create an emotional connection — or frame — with the reader. Advertising executives know this stuff.

News coverage of the raging Australian bushfires almost universally attribute the story in whole or part to “global  warming” or “climate change.” As with “warming”, “change” generally has a positive, hopeful emotional frame. I mean, what’s not to like about warming change?

This may seem like quibbling, after all we humans are smart, right? We can tell the difference between advertising hype and reality, right?

Unfortunately, no. We humans are not as rational and discerning as we like to believe. Mad Men’s ad wizard Don Draper can tell you that and so can neurolinguist George Lakoff, author of “Don’t Think Of An Elephant: Know Your Values And Frame The Debate.”

Lakoff noted in another publication:

As any advertising executive — or propagandist — can tell you, words matter. A lot. In fact, they set our cognitive (thinking) stage. When Lakoff instructs “don’t think of an elephant”, what comes to mind? For some it is a circus elephant and for others a charging African bull elephant and for someone else that cute little baby elephant they saw at the zoo last summer. But everyone has “elephant” on the mind … even when they were told explicitly not to go there. And along with that varying degrees of emotion and personal identification.

While research estimates vary, neuroscientists say that 90-95+% of our decision making is emotionally — not logically — based. We not only respond to the emotional framing of the wording on a microwave dinner box, but linguistic framing also determines the brand of track shoe or beer or car we purchase … or long for.

In the opening quote above, novelist James Baldwin correctly notes that until we can recognize a problem — which is another way of saying emotionally understand or really get a problem — there is no chance of crafting a solution.

If ever there was need for addressing a problem, Australia is the poster continent.

Attributing the carnage of the Australian tragedy to “global warming” or “climate change” is to greatly underplay the very nature of what is rapidly unfolding around the globe before our smoke-stung eyes.

Note how the following rings with you emotionally:

All of those more accurately describe — emotionally frame — the reality of what Australia is experiencing, and what imperils us and future generations. Language has the power to both reflect and create our perceived reality. If ever there was time for clear vision, this is it.

Last October The Guardian newspaper announced six editorial changes they have made when addressing the issue of — what they now refer to as — “climate crisis” or “climate emergency”. They also now refer to the more accurate “global heating”.

Now, from my days working in a newsroom many years ago, I can hear some curmudgeonly old copy editor saying such terminology is politicizing language. I would argue by the use of “change” and “warming” that is exactly what is happening now, but with the added offense of under-reporting — lying about — what is truly an “existential threat” to life on the only planet humanity has.

There are many things on may levels around the world that need to be done if we are to have any chance of dodging mass extinction due to “worldwide climate destruction”, but the first, as Baldwin wisely advises, is to properly “recognize the problem”, which begins by using the correct wording.

We need to begin in the way we talk with friends and neighbors about climate crisis. Dinner warming in the microwave is comforting but global heating is not.

(Commoner Call column and cartoon by Mark L. Taylor, 2020. Open source and free for non-derivative use with link to www.thecommonercall.org )

The moment was captured on Kangaroo Island, which one shaken rescuer said has “bodies of charred animals as far as the eye can see.”

Devastating images have captured the moment a singed koala appears to mourn the death of its companion after a wildfire decimated their Kangaroo Island habitat.

The island, off the coast of South Australia, is a biodiverse haven for wildlife. It’s sometimes described as the Galapagos of Australia. Fires destroyed as much as half of the rich habitat there when they tore through two weeks ago, leaving scores of dead animals in their wake [Note, far more than “scores” of animals have been killed, as noted below. Estimates are of a billion animals having been lost in the climate crisis triggered fires, many of them threatened and endangered. Ed.].

In the image, taken Wednesday, the injured koala sits with its face buried in its chest near a deceased smaller koala.

It has been estimated that more than half of the island’s 50,000 koalas ― the only chlamydia-free population in the country ― may have died in the blazes. …

Read The Rest And 1+-Minute Video

“A massive 200 Billion Dollar Sea Wall, built around New York to protect it from rare storms, is a costly, foolish & environmentally unfriendly idea that, when needed, probably won’t work anyway. It will also look terrible. Sorry, you’ll just have to get your mops & buckets ready!”