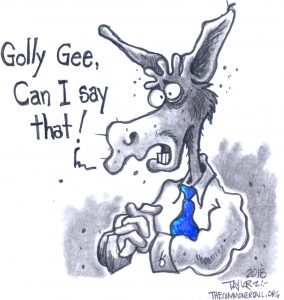 Who said: “We are rightly proud of the high standards of medical care we know how to provide in the US. The fact is, however, that most of our people cannot afford to pay for the care they need. I have often and strongly urged that this condition demands a national health program. The heart of the program must be a national system of payment for medical care based on well-tried insurance principles. This great nation cannot afford to allow its citizens to suffer needlessly from the lack of proper medical care”?

These are all quotes from then–President Harry Truman, who today is generally imagined as the embodiment of a traditional mainstream Democrat.

When he spoke to the 1952 national convention of Americans for Democratic Action, he had some advice to those who shared his partisanship: “The first rule in my book is that we have to stick by the liberal principles of the Democratic Party. We are not going to get anywhere by trimming or appeasing. And we don’t need to try it.”

So don’t let anyone tell you that the back-of-the-polls Democrats who are trying to distinguish themselves by calling for a more tepid approach to the 2020 presidential race are calling the party back to its roots. They are proposing a strategy that Truman correctly identified as a recipe for defeat. …

How America Broke Up With The Democratic Party

Many grassroots Democrats separated from their party in the 1990s, and the 2020 election may be the last chance to save the marriage.

While the GOP has been trying to establish a semi-permanent ruling majority through bigotry, gerrymandering and voter suppression, Democrats had long-term majority control of American politics pretty much continuously for more than a half-century.

Since 1981, not one American president has seriously challenged the neoliberal basis of Reaganomics. Billionaires and corporations now largely run our politics, to the point that average working people’s desires are about as likely to be made into law as random chance.

Franklin D. Roosevelt was elected four times to the presidency and brought with him a Democratic Party sweep so complete that, with the exception of two brief two-year periods, Democrats controlled the House of Representatives from 1931 to 1995. FDR built the modern-day Democratic Party and launched it toward the 21st century.

Working-class Americans had fallen in love with Roosevelt and Democratic Party policies in the 1930s, and that love affair persisted across the better part of three generations. In the past few decades, though, they “fell out of love” with the Democratic Party and began regularly putting Republicans in charge of the country.