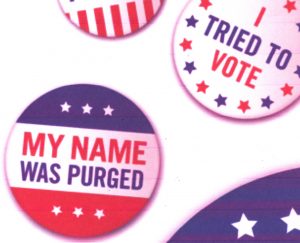 MILWAUKEE, WI — The fate of 230,000 registered voters in Wisconsin is up for grabs as two groups engage in a legal fight to either keep them on the state’s voter rolls, or kick them off.

Earlier this month, the Wisconsin Institute for Law & Liberty filed a lawsuit in Ozaukee County Circuit Court, claiming the Wisconsin Election Commission would violate state election laws if they failed remove residents from state voter rolls if residents fail to update their information within 30 days of moving.

On Friday, Ozaukee County Circuit Court judge Paul Malloy issued an order that requires the Wisconsin Election Commission to remove the aforementioned voter registrations on the basis of state law.

On Tuesday, the League of Women Voters of Wisconsin and two registered Wisconsin voters filed a lawsuit in federal court, claiming the purge of nearly 230,000 registered voters violates the U.S. Constitution. You can view that lawsuit here.

In their lawsuit, the League alleges that letters sent by the Wisconsin Elections Commission did not provide enough notice of what voters needed to do to remain on the rolls.

Wisconsin’s most populous city, Milwaukee, leads all cities with more than 35,000 voters who were sent “mover” mailings and are consequently the object of those who want to purge them from the rolls. Madison, Eau Claire, Green Bay and La Crosse round out the state’s top five.

Here is every city in Wisconsin ranked, as far as those who are on the voter purge list. …